The loss of a child is difficult for an entire community, and it’s especially hard on the deceased child’s best friends. Then-12-year-old Kaleb Klakulak knew this all too well. In the summer of 2018, Kaleb lost his friend, Kenneth “K.J.” Gross, to a battle against leukemia. But when he learned K.J.’s family couldn’t afford a gravestone for his friend, he raised money to buy one for them.

Even though K.J. had battled leukemia for his entire life with the help of chemotherapy and treatment, he and Kaleb never let it slow their friendship down. According to Channel 7 Detroit News, the two boys had an inseparable bond, with both of them sharing the same interests.

“It was fun because he liked almost everything I liked,” Kaleb told CNN, while K.J.’s mother, LaSondra Singleton, remarked that the two quiet and sweet-natured boys “were like two of a kind.”

Kaleb would go to the hospital to enjoy activities like painting and board games with his best bud.

“Kaleb was too young to go into the ICU, but the doctor made an exception … because he thought K.J. needed his best friend,” Kaleb’s mother, Kristy Hall, told The Detroit News. “They would paint together, and play video games together. K.J. was intubated, so he wasn’t able to speak. But they would communicate. It was pretty amazing to watch.”

After a tough battle, K.J. passed due to congestive heart failure on May 1, 2018, at the age of 12. However, due to Singleton having to quit her job to care for her ill son full-time, she did not have the funds to commission a custom gravestone for K.J., buried at Detroit’s Elmwood Cemetery. When K.J.’s best friend learned of the tragic news, he knew he had to do something to help. 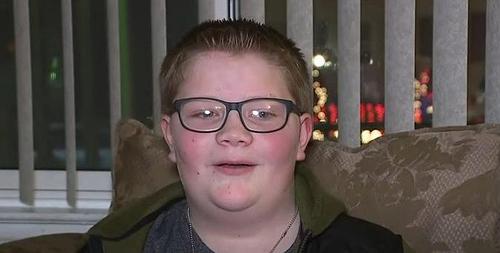 When K.J. passed away, his mom found herself facing not only the death of her son but also the expenses surrounding a funeral. Singleton had been forced to quit her job so that she could take care of her son and also had other children and ailing parents to take care of, according to Channel 7 Detroit News.

K.J. was buried in a family plot that had already been paid for, but he would have to go without a headstone as the costs were simply too much for her to cover.

“I love Ms. San,” Kaleb said, referring to his best friend’s mother by a term of endearment. “I was sad she couldn’t afford it. I wanted people to be able to find (K.J.’s grave) when they went to see him.”

According to Kaleb’s mom, the young boy “slowly started saying things like, ‘Mom, how much does a headstone cost?’”

Kaleb got to work. He began collecting soda bottles to resell. He also launched a crowd-funding page to raise $2,500 and shared his goal with the rest of the world. Realizing he wanted to have K.J.’s headstone in place by Christmas, the public hurried to help. By the time Christmas rolled around, Kaleb was able to provide K.J.’s mom with the funds.

“I cried because it was unexpected. I cried because I’m trying to figure out things from day to day,” Singleton told CNN. “I can see his final resting place. I have a place I can go and be with him,” she added, saying his kind gesture spoke to “how genuine and how beautiful K.J.’s heart was.”

“It’s a bittersweet thing because it’s finalizing everything for me,” she added. “I’ve wanted to get his headstone, but at the same time, it’s making everything final for me.”

What do you think of the friendship between K.J. and Kaleb? Did you have any friendships in childhood that have remained strong? Let us know, and be sure to pass this on to them, as well as family and friends.