Two prominent actresses took a risk by taking a stand against the Hollywood culture of promoting far-left people and causes. Not only is this risky for their careers, but the backlash can also be quite overwhelming. 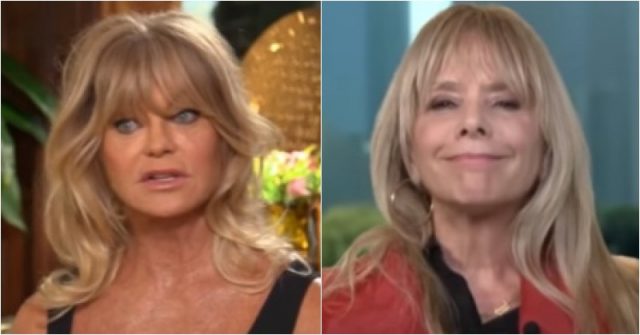 Goldie Hawn (left), Rosanna Arquette (right) (Credit: YouTube, YouTube)
Actresses Goldie Hawn and Rosanna Arquette made waves when both broke ranks with the Hollywood crowd, even though they did it in very different ways. The 76-year-old Hawn, who is also an Oscar winner, discussed the heavy political activism of Hollywood, stating that she likes to “stay in her lane” when it comes to politics and believes entertainers should strive to “serve” and perform “for all people.”

“I think it’s why it drives people crazy when Hollywood tries to act holier than thou and starts lecturing middle America about morality and so on,” said host Megyn Kelly. “And you know, these people sitting in Iowa who have never done any, they’ve never tried to put someone on a casting couch … They’re like, ‘You could save your lectures for somebody else.’” 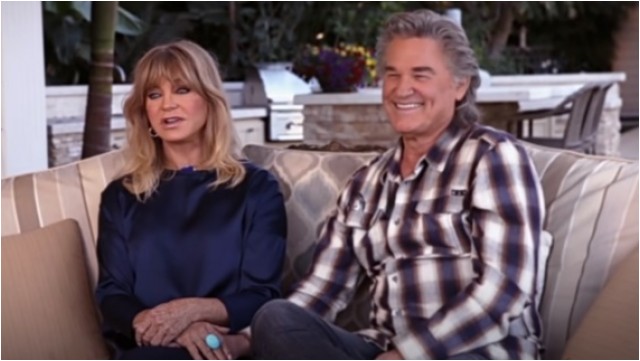 Hawn agreed. “That’s right, exactly… A lot of Hollywood has a lot of missions, right? And you know, you want to put your name onto something that you believe in, but it doesn’t make a difference. And that’s the reality,” she replied.

“I stay in my lane,” Hawn declared. “The reality is, is that if we want to do anything, we want to do it for all people, not just for a group or whatever. What makes polarity, even more, is creating teams on either side of the aisle.” Hawn, who has been in a relationship with actor Kurt Russell since 1983, then went on to emphasize lecturing Americans about politics not being an actor’s job: “I think we entertain. I think we bring awareness to people, just of their ability to laugh, to have joy, to experience it, to cry. We are emotional beings and create emotion in others. And it’s in this case, I think we’re in service.”

That brings us to Rosanna Arquette, who gave herself a reality check and a big wake-up call after she posted her support to recall Los Angeles District Attorney George Gascon. “As violent crime continues to surge in Los Angeles, a prominent left-wing Hollywood star is adding her support to the effort to recall the county’s far-left, Soros-backed district attorney, George Gascon,” Breitbart reports.

The 62-year-old Arquette, who won a BAFTA award for her role in Madonna’s film “Desperately Seeking Susan,” shared an image from the “Recall George Gascon” effort on social media. Arquette posted a screenshot of an Instagram post by former Beverly Hills mayor Lili Bosse. “I am ALL IN,” Bosse wrote. “Recall DA George Gascon.” The caption displayed under a photo of Gascon next to a graphic read, “2022: The Year We Recall George Gascon.” 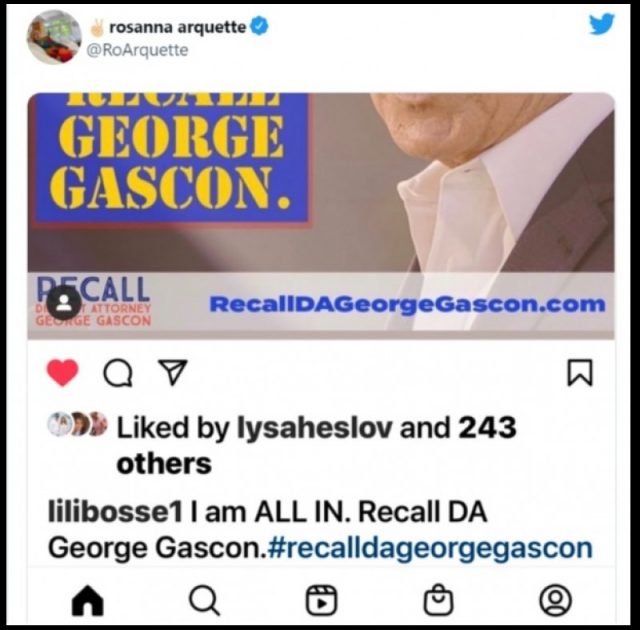 Arquette’s post fell on deaf ears. Even though the Emmy-nominated actress has a following of 224,000 on Twitter, the “recall George Gascon” post only received 20 “likes.” Recalling Gascon is not something the Hollywood crowd has been behind nor is it a cause any of Arquette’s followers support. However, with Los Angeles homicides surging to their highest level in 15 years, Arquette and other Southern Californians see recalling the “soft on crime” Gascon as just plain common sense.
At the Golden Globe Awards show in 2020, comedian Ricky Gervais unleashed a memorable tongue-lashing on celebrities for lecturing the public, especially on issues they have no clue about. “So, if you do win an award tonight, don’t use it as a platform to make a political speech,” Gervais instructed the star-studded Hollywood audience. “You’re in no position to lecture the public about anything. You know nothing about the real world. Most of you spent less time in school than Greta Thunberg. So, if you win, come up, accept your little award. Thank your agent and your god, and f*** off!”