Right before her daughter’s second birthday, an Illinois mother came up with a unique gift idea ― a customized doll that looked exactly like the toddler. The mom had no idea her daughter’s reaction video would soon go viral.

When Kimberly was pregnant with her daughter, Olive Mohlman, the doctors said her baby would have Down syndrome. It was a diagnosis no parent wanted to hear, but once little Mohlman was born, she became the center of her parents’ world.

The little girl lived with her parents in their O’Fallon, Illinois, home, where they spent dozens of memorable moments. Each day, the parents learned something new about their daughter and felt happy to see her grow up.

Since raising a kid with Down syndrome was a unique experience, Kimberly decided to share her journey with the world through social media to raise awareness. She regularly shares photos and videos of her little girl on social media.

“I started TikTok to show her journey and to spread some positive and funny things since the world is a bit crazy,” Kimberly confessed. She hoped parents of children with Down syndrome would feel motivated by watching her content.

However, Kimberly had no idea that her daughter’s video would go viral one day and rack millions of views. She intended to share a beautiful moment from Mohlman’s birthday, unaware of the mind-blowing response yet to come.

The Birthday Gift
Kimberly surprised Mohlman with a gift box on the toddler’s second birthday and recorded her reaction. In the video, Mohlman smiles after looking at the gift box her father helps her open.

Netizens loved Mohlman’s reaction so much that her video went viral in no time.
Then, Mohlman’s expression suddenly changes after she spots a doll inside the brown box. She gives her father a surprised look and immediately kisses the doll after it emerges from the carton.

Her Unexpected Reaction
The doll Kimberly gifted her was not ordinary. What made it special was that it looked exactly like Mohlman. They had the same short hair and similar facial features, and Mohlman’s adorable reaction proved she loved her birthday gift.

In the video, Mohlman wrapped her arms around the little doll and patted her back. Kimberly confessed she felt extremely emotional watching her daughter’s reaction. She said:

“Her little surprised reaction was so cute, then I cried happy tears, and my heart just burst with joy when I saw her do the back pats.” 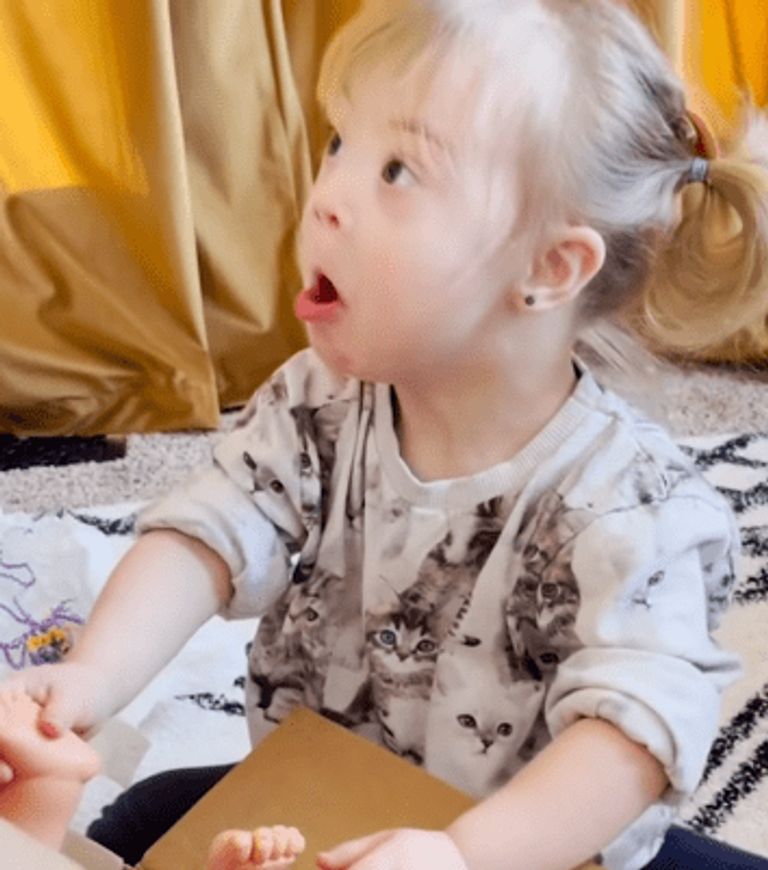 The Mom’s Feelings
Kimberly had designed the doll to resemble Mohlman, and watching her baby girl’s reaction made her happy. She said she was a “proud mom” and was “obsessed” with her little girl.

After recording the video, Kimberly shared it with the world by uploading it on her social media accounts. At that time, she had no idea that it would gain the attention of millions of people worldwide. She said:

“I think it’s the perfect video because it makes people smile and cry tears of joy – we need more of that during these stressful times.” 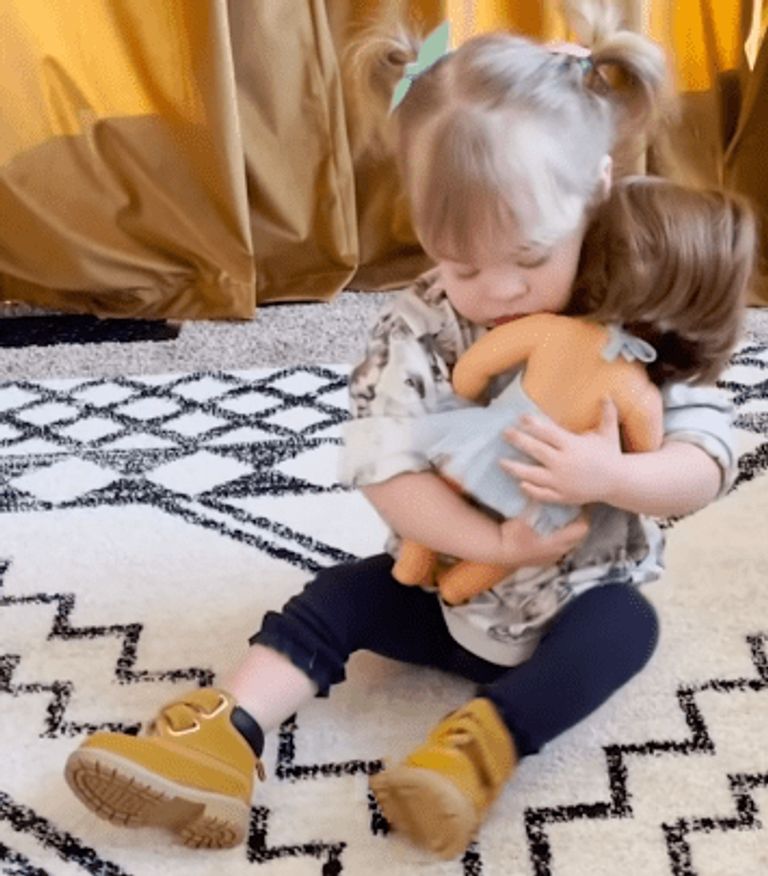 The Online Response
Netizens loved Mohlman’s reaction so much that her video went viral in no time. The TikTok clip got more than seven million views as of April 2021, and the numbers have increased since then. Here are some of the comments from her video shared on YouTube:

“She’s one of the most beautiful children I’ve ever seen. The expression right before dad asks if she wants to give her a hug. Great kid.”

“When that little girl closed her eyes and rocked her dolly while hugging her put tears in my eyes. My little niece also has Down syndrome and is just as sweet, loving, and gentle. What a blessing [sic].” 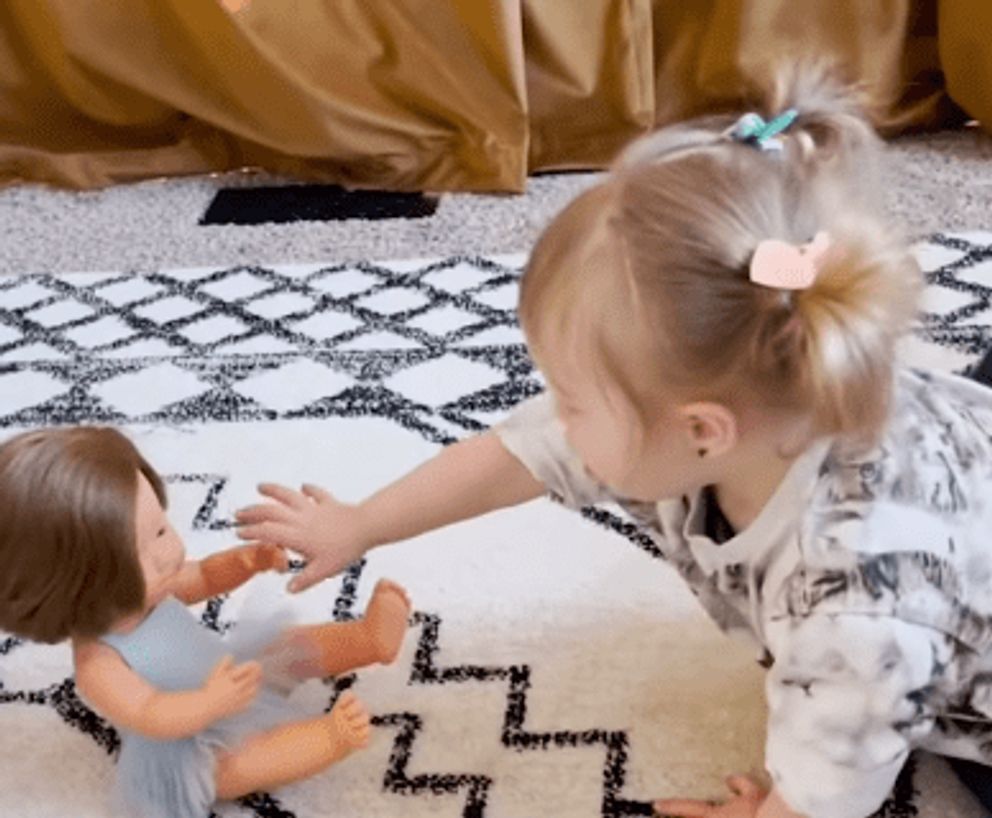 “When she started hugging the doll and softly patting her on the back, I melted.”

“Very, very touching. People with Down syndrome are some of the sweetest, kindest people you could ever meet.”

We hope little Mohlman keeps surprising her parents with such adorable reactions. If you liked reading about her, share this story with your friends and family to brighten their day.

Click here to read another story about a mother who nearly gave up her twins with Down syndrome. Now, the babies are six, and the mom is glad she changed her decision.