Sydney Smoot might look like your average 4th-grade girl, but she has taken such a bold stand against Common Core that she received a standing ovation from adults at least three times her age. 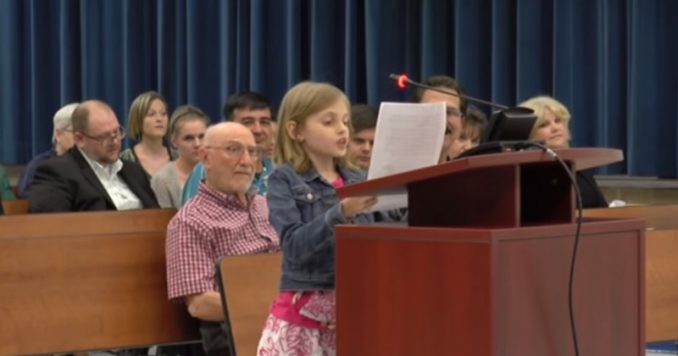 Every now and then, our children amaze us with unconventional wisdom that we can only attribute to their exceptional way of looking at the world. However, it’s truly a rare sight to witness a child exude such maturity and boldness when faced with an unjust policy put upon them by their authorities.

This is undoubtedly why young Sydney Smoot of Florida’s Brookeville Elementary has gained attention nationwide for the question she turned on her own school board.

When young Sydney quietly approached the Hernando County School Board, the pint-sized girl could barely reach the podium.

However, once she opened her mouth, the entire auditorium fell silent in awe of her articulate speech, which was followed up with a remarkably clever question. 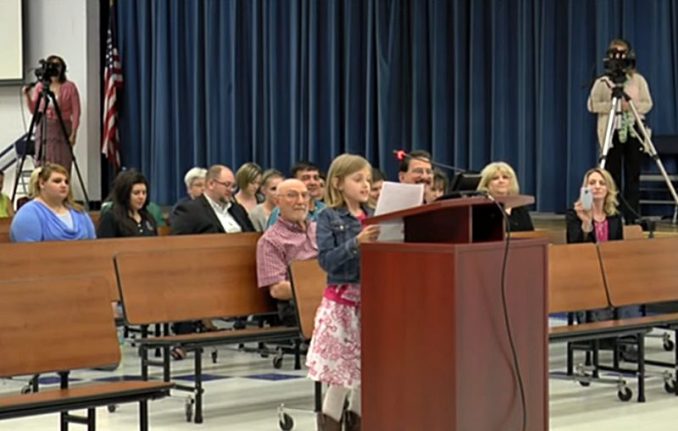 Speaking on behalf of her fellow classmates, Sydney Smoot exposed the impact that state standardized testing required by Common Core is having on students across the nation.

Then, just as boldly as she began, young Syndey posed a striking question to the school board, pointing out one major flaw in the stressful end-of-the-year tests.

Why am I being forced to take a test that hasn’t even been tested on students here in Florida, so how can it be valid and accurate on what I know?” she asked.

It was this simple yet obvious question that not only earned the brilliant 4th grader a standing ovation by her adult audience but also caused the school board to sit silently in awe of her eloquent and unwavering lecture.

However, Sydney Smoot didn’t merely complain about the problem without providing a feasible solution. Instead, she suggested that the painstaking test is divided up into three smaller tests to determine how students are fairing throughout the year.

Sydney followed up her moving speech with yet another question, one that perfectly presented the school board with a reminder that while the students attend school to learn, they are still children.

Why should we have so much stress about one test when we should be learning and having fun at school?” she asked.

Perhaps the most startling moment in Sydney’s speech was her revealing of a secret contract that students must sign, preventing them from speaking with their parents about the test.

“I do not feel good about a form in the FSA that you have to sign ensuring that you can’t even discuss the test with your parents. I am not comfortable signing something like this. I have the right to talk to my parents about any and everything related to school and my education,” she boldly declared. 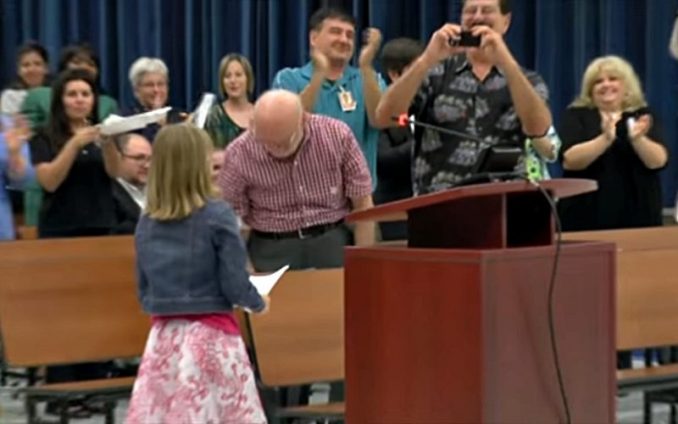 In case anyone doubted whether Sydney Smoot was coached, the young girl told Upworthy that while she owes her courage to her mother, it was all her idea to address the school about the issue.

What inspired me to speak all started one day when I came home. My mom asked me how the testing went, and I told her I was told not to speak about the test to anyone. I had not felt comfortable signing something in the test.

I had concerns about this test because there was a lot of stress put on students and myself. I was a little nervous before the speech, but when I was called up to the podium, I did not feel nervous because I knew this speech was going to help a lot of people.”

Sydney Smoot is living proof that our children deserve better from our education system. Incredibly, this little girl showcases that, despite our country’s shortcomings, our children are resilient and hold bright hope for our future.