This endearing story from March 2020 is a testament to the great influence adults can have on kids. When “Dress As Your Favorite Person Day” came around at then-5-year-old Easton Blocker’s school, the boy chose to dress as Jeffrey Cross, his school’s security officer.

Many little boys look to Iron Man or Superman as their favorite people, and when the chance comes to dress up in their favorite superhero costume, parents start looking for masks and capes. But Easton Blocker, an adorable 5-year-old at Bobby G. Lester Elementary School in Jacksonville, Arkansas, had a very different idea. He chose to dress as Cross, his school’s security officer.

In the fall of 2019, Jacksonville North Pulaski School District made the important decision to have armed security personnel. They even went a step further and became the first school district in the state to have an armed security guard at every school.

At the beginning of the school year, Cross donned his bright yellow security uniform shirt and holstered his gun as he met with curious students. They asked a lot of questions, and Cross wanted to make sure they understood why he was there.

It is a constant challenge to make students enough aware of the danger to take precautions against it, but not to make them so afraid that they are scared all the time. Cross skillfully explained his presence to the students. They had questions about why he was armed and he told them that he was armed to protect them from someone bad who could come and hurt them. 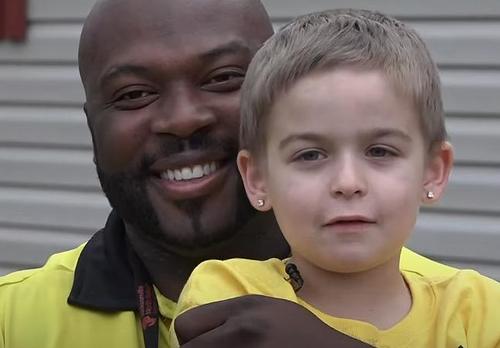 Little Easton was listening closely, and the words went right to his heart. He knew bad people sometimes tried to hurt kids in school, but now he knew that Mr. Cross wasn’t going to let it happen at Lester Elementary.

At the beginning of March 2020, the school decided to have “Dress as Your Favorite Person Day.” Easton was up before his alarm went off, super excited to get to school. In the midst of all the creative costumes and general excitement, Easton stood out from the crowd in his own bright yellow uniform shirt. Cross was surprised and honored, and it made him appreciate his job more.

“He’s infatuated with Officer Cross … He will tell you, ‘That’s my best friend!’”

“Most of the scholars are expected to dress as their teachers or fellow classmates … Easton, ever since the first day of school, he comes up and hugs me. He’s adorable. He has a very fun, high-spirited personality.”

Naturally, Cross was completely flattered at Easton’s enthusiasm. After the school posted photos of the security guard and the “junior security guard,” their story went viral.

It’s not every day that students honor the people who have a direct and positive impact on their well-being when usually a glossy superhero takes precedence. But deciding to dress as Cross was an easy decision for Easton. He wanted to dress like the man who keeps him safe from bad guys every single day.

Isn’t this story totally adorable? What do you think of Easton dressing up as Security Officer Cross? Let us know, and be sure to pass this on so others can read about it too!