When an Atlanta police officer went about her duties like every other day, she had no idea what was waiting for her on the streets. Once she reached her duty location, she experienced something unusual that had never happened to her before.

What’s the strangest thing that has ever happened to you? Life has its ways of surprising us. While some people find happiness or sorrow in such unexpected experiences, others just feel shocked and don’t know what to make of it.

The police officer in today’s story was patrolling the streets when she noticed something unusual. Before she knew it, people around her had started filming because what was happening wasn’t something they witnessed every day.

Back in 2017, officer Danielle Ognelodh was patrolling the streets of Atlanta, Georgia, when she witnessed something strange. She arrived at her duty location on time like every other day and was ready to deal with troublemakers and help citizens in need.

That day, a young boy approached her. When she went towards him and asked what had happened, he told her something unexpected. Instead of informing her about a crime or asking for help, he asked her for prayer.

Officer Ognelodh didn’t think twice before helping the kid. Meanwhile, bystanders pulled out their mobile phones and started filming her and the young boy.

In the video clip, Ognelodh can be seen standing in front of the kid while holding his face. The boy looks down and stands still, placing both hands on his belly. The boy’s friends stand beside him while Ognelodh prays for him.

A few seconds later, Ognelodh slides her hands and rests them on the boy’s shoulder while praying. Her words aren’t audible, but the heartwarming video shows how sincerely she prayed for him. In an interview with WSB-TV, the officer revealed:

“We went outside, and one of the kids asked for prayer. I sat there with the kids, and we all prayed. They told me some things in their life that they were going through, and that’s how the video happened.”

The seconds-long video went viral on the internet. People were amazed to see how a police officer stopped and prayed for the kid when she could have moved on with her duty instead.

Officer Ognelodh said she hoped her kind gesture would help her build a strong bond with children and other residents in the area. She didn’t want the people in the community to hesitate while approaching her.

After watching Ognelodh’s heartwarming video, viewers flooded the comments section with their opinions and praises for the officer. Here are a few comments:

“Keep it up, woman of God. If we get more people like you policing these streets, the world will be a better place.” 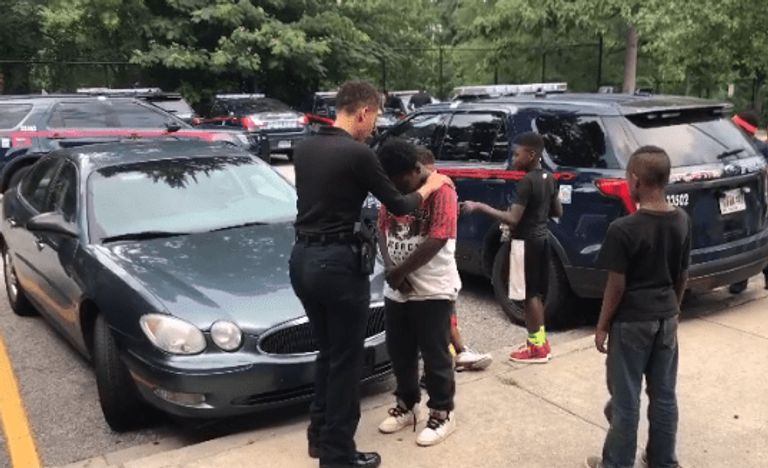 “So powerful!! Literally brings tears to my eyes.”

“Do you realize how AMAZING you really are?”

A similar incident occurred in Louisville, Kentucky, where a boy stopped a police officer not because he needed help but because he had something to offer.

On November 5, 2021, officer Jan Dykes was on duty when a child approached her while he was going to school. What the little boy said stayed in Dykes’ heart forever.

His words made the moment special for her, and luckily, it was captured by Louisville Metro Police Department, who later published the photo on their Facebook page

People wondered why the woman kneeled with her hand on the boy’s chest as the photo did rounds on the internet. In an interview with NBC12, Dykes revealed what had happened:

“He stopped me and was like, ‘Hey, before you leave, would [sic] mind if I prayed with you for your day and my day going to school?’”

Dykes said her experience was “great,” while the little boy said he wanted to pray for his “new friend” and hoped she had a wonderful day. The officer was stunned to witness the youngster’s kindness.

Share this article with your friends and family to spread positivity and make them feel inspired. The heartwarming gesture of these boys might brighten their day.

Click here to read another story about a little boy who selflessly rushed to help an elderly lady in need and walked her up the stairs.