A little boy went viral for heart-touching images shared alongside his sister as she comforted him during his chemo treatment. Now, he has finally recovered from cancer and is given the green signal to go back to school.

Suffering from a fatal disease can weigh down on people’s mental and physical health. However, having their loved ones by their side in times of distress can make a huge difference, bolstering them at a time when everything seems dreary and hopeless.

Beckett was fortunate enough to receive incessant care and support from his family, especially his elder sister, Aubrey. Kaitlyn Burge from Princeton, Texas, shared touching images of her kids in September 2019 on the “Beckett Strong” Facebook page, which went viral.

The photos showed the then 5-year-old Aubrey gently rubbing her brother’s back, who stood by the toilet seat after vomiting in reaction to chemotherapy. Beckett was only 4 at the time. Regarding her children’s special connection, Burge shared:

“Aubrey had such a huge impact on helping him get through this. They developed a bond that only siblings have that I couldn’t even replace.”

Beckett was diagnosed with acute lymphoblastic leukemia in April 2018 when he was only 2 years old. According to Burge, Aubrey often carried her younger brother in her arms and took him to the couch when he was too fragile to walk.

Throughout his battle against cancer, Aubrey played the role of protector in Beckett’s life, taking care of her baby brother just like a mother. Burge further expressed her thoughts on the irreplaceable bond between her children:

“She [Aubrey] stuck by him. She supported him and she took care of him, regardless of the situation. To this day, they are closer. She always takes care of him (sic).”

Beckett had to spend months being hospitalized following his diagnosis. ALL is the most common type of leukemia affecting children and attacks the immature white blood cells called lymphocytes, which end up destroying foreign proteins in the body.

Burge shared that when Beckett was diagnosed with ALL and taken for treatment, Aubrey had a tough time adjusting to things. She saw him being hospitalized and couldn’t come to terms with everything her best friend and baby brother was experiencing.

But instead of driving a wedge between her kids, she was happy to see her daughter becoming her son’s biggest support system. She also emphasized the importance of encouraging feelings of togetherness and care among children, especially during illness.

Beckett is finally free of cancer, and according to his mom, he is all set to resume his studies and turn over a new leaf in his life. Burge is a mother of three kids now and has a younger daughter Chandler, alongside Aubrey and Beckett.

Aubrey, whose studies had also come to a halt because of the financial strain on her parents during her brother’s treatment, has also begun engaging in her hobbies. Beckett stopped receiving his chemo treatment on August 8, 2021.

The mother of three shared that she happily welcomes any occasional fights between her kids because it’s a sign her family has finally gone back to normal. 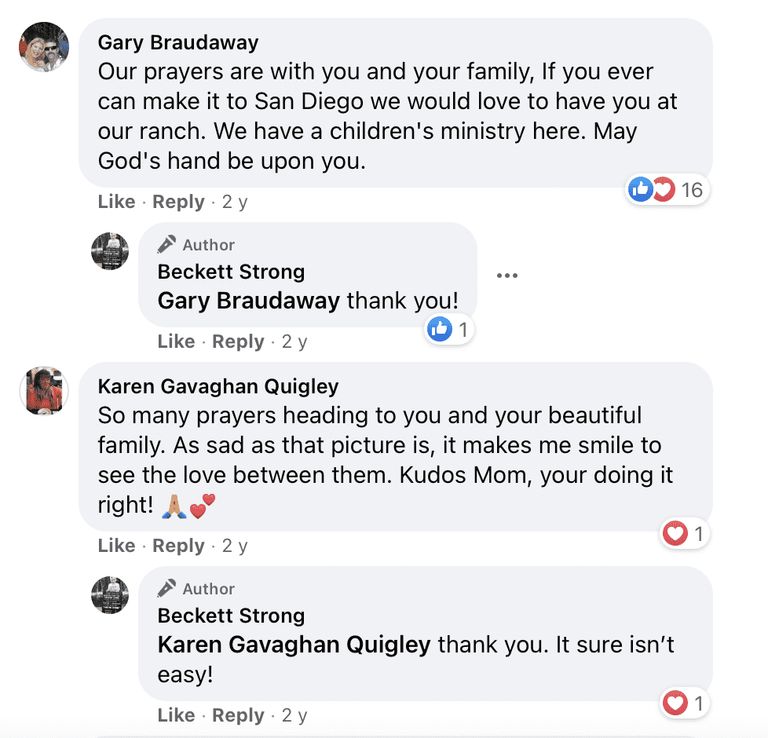 Many netizens were deeply touched by Beckett’s cancer survival story and particularly appreciated his sister’s support. One user commented: “What an incredible family you are. Prayers coming for Beckett and all of you (sic).”

Another one added: “thank you for sharing your story. children are really wonderful in the face if adversity (sic).” A third user shared: “As sad as that picture is, it makes me smile to see the love between them. Kudos, Mom, your doing it right (sic).”

Burge shared that her son sometimes experiences slight pain in his leg and other side effects of cancer, but he’s doing much better than before and prepared to resume a happy, normal life.