Country singer Brad and actress Kimberly Paisley have a funny but beautiful love story. They have two children together, and through the free referral grocery shop, The Store, they help people with food insecurities and teach their children about equality and the importance of offering a helping hand.

But surprisingly, their jobs got them together and gave them a fascinating love story. Brad first saw Kimberly when she was in the film “Father of the Bride.” 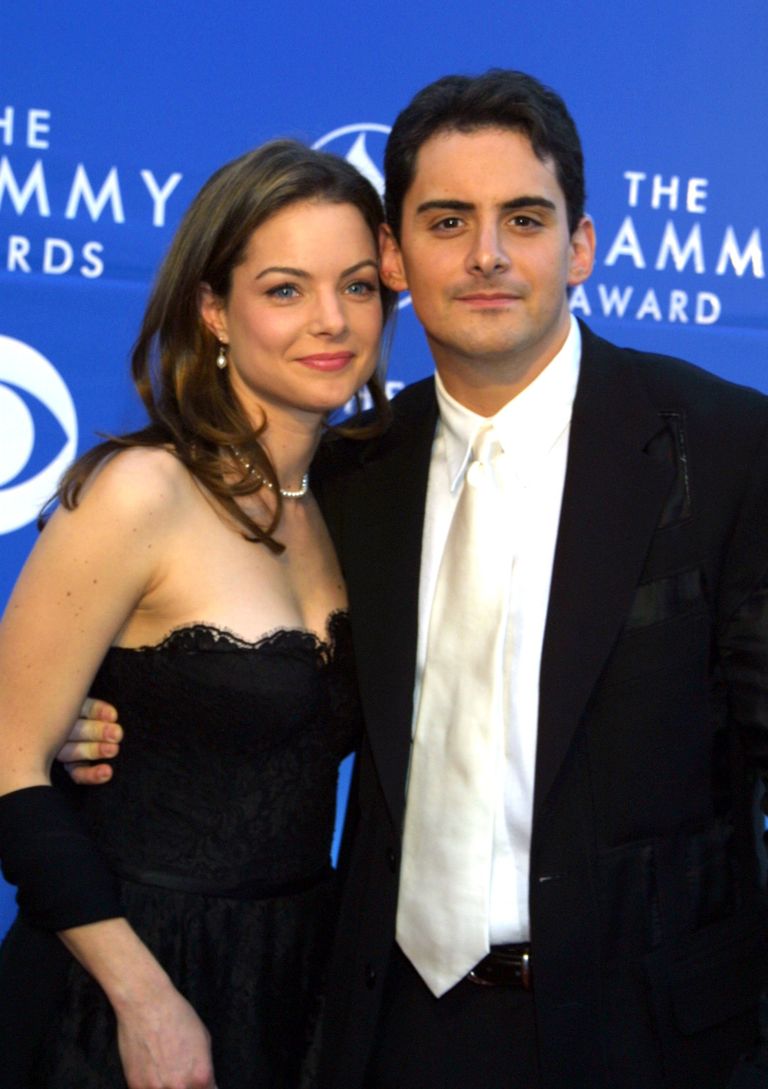 The country singer watched the film on his first date with his then-girlfriend, and when the world discovered the upcoming actress Kimberly in the movie, he thought she looked like a nice person to talk to.

When the sequel of “Father of the Bride” came out, Brad was 23, single and heartbroken because his ex-girlfriend left him for his best friend.

So Brad took his sad self to watch “Father of the Bride 2,” and Kimberly captured him again. The singer said, “I thought, She seems like a great girl — smart and funny and all those things that are so hard to find.”

Five years later, Brad became a country sensation; he was even named the top vocalist of the year by the Academy of country music, but he was still single.

The singer had just released his album Part 2, which featured many songs about his ex-girlfriend, even a song about going to see “Father of the Bride.”

So, when Brad was looking for music video ideas for the song “I am going to miss her,” he immediately thought of Kimberly, the girl from the movie. 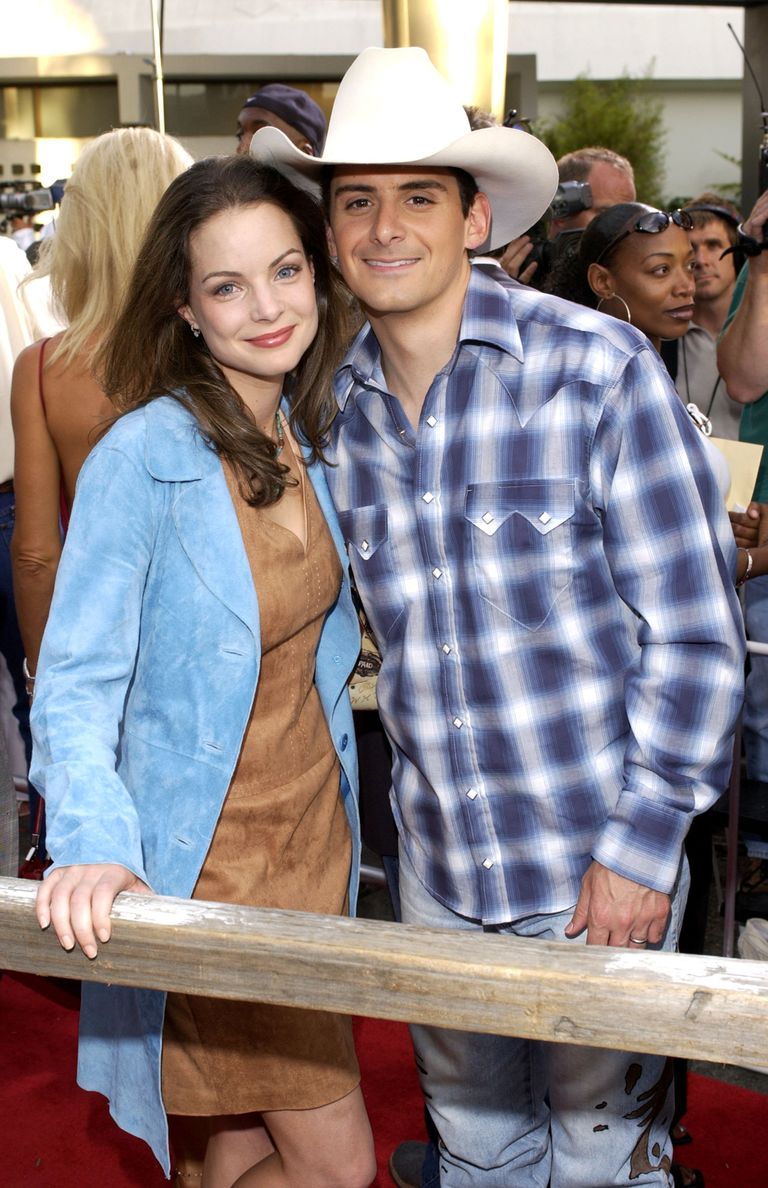 Brad did not waste time; he got on the phone and asked Kimberly to be part of his project, and that one phone call turned them into speaking almost daily.

When Brad mentioned that he was traveling to Los Angeles, Kimberly quickly asked him to have dinner with her; she said, “He was such a polite Southern gentleman. I was getting impatient.”

From that first date, Brad told himself he would not lose Kimberly over pretending to be someone he’s not, so the singer focused on impressing the actress with his authentic humorous character.

After a few months of dating, Brad proposed to his long-time crush at the pier of Venice beach California, right in front of the public toilets. The couple laughed it off and tied the knot nine months later.

What Brad might describe as love at first sight, Kimberley sees as stalking. The actress jokingly said her relationship with Brad could have ended in a marriage or jail, but she chose to marry him.

A few years after getting married, Brad and Kimberly welcomed their first son William Huckleberry Paisley in February of 2007, and their second son Jasper came in 2009.

BRAD HAS A “GIGANTIC HEART” WHILE KIMBERLY RAISES “THREE BOYS”

Brad and Kimberly’s marriage has only gotten stronger through the years. Even during the challenging time of COVID, both artists had at home for a long time.

Brad said the quarantine time with his family showed him how much he enjoys spending time with his wife, which he does not do much since he travels a lot.

Above all else, each year they spend together has been a confirmation of why they are together. Brad expressed his appreciation for his wife and said;

“You keep our house afloat — seeing you give birth to two kids and raise a third is amazing.”

Brad also appreciates how she always tries to do the right thing for their family, and most importantly, he loves that she gave birth to their two boys and is willing to raise a third; Brad jokingly added himself to the list.

For Kimberly, what has kept her glued to Brad is his “Gigantic heart.” The actress said her husband cares about anyone and any creature.

She even shared a story of when it rained so hard that their Nashville house was flooded outside, but Brad ran out at 02:00 a.m. to check if the goose eggs in their garden were safe.

Unfortunately, the eggs did not survive, but Kimberly was touched by the extremes Brad would go through to care for someone or something.

From their funny engagement, humor is vital to the Paisley family. Brad even said the only reason Kimberly gave him a second was because he made her laugh.

The country singer had several reasons why his wife chose him, but another significant was his old-school way of doing things. Brad said, “When you’re old-fashioned like I am, you know marriage is forever.”

Brad and Kimberly are continuously working on their marriage and keeping the spark alive. They recently celebrated 19 years of marriage, and the couple has learned much from each other.

THE COUPLE TEACHES THEIR KIDS ABOUT HUNGER AND GIVING BACK

Brad and Kimberly love to give back, and just before the pandemic hit, the couple opened The Store in Nashville.

The Store is a free referral grocery store that provides health and legal aid to those with limited food supplies. They also offer free music therapy for anyone dealing with the stress of food insecurity.

The Store’s purpose was to avoid handouts and let people choose the food they wanted for their families with dignity.

Kimberly also mentioned that it was important for their children to understand hunger struggles in the world and teach them that everyone is equal and deserves nutritious food. The actress said;

“It was transformative for us bringing the kids in and letting them see that, letting them normalize and sort of erasing the margins, so there’s no difference between you and me. We’re all kind of in this community together.”

The Store has helped many families in Nashville; Kimberly and Brad also gave credit to the community for helping make it possible.

Since The Store was opened, they have had more than 350 volunteers and delivered over 1.3 million free food to the community.