Angelina Jolie has been absent from Instagram for years. On the day she decided to join the Facebook-owned social media platform, the Academy Award-winning actress posted content that left users in a state of shock. Jolie, who is known for being a liberal among the Hollywood elite, shattered American’s expectations when she used her first post on Instagram to criticize President Joe Biden, saying that she is “ashamed” of the way he decided to handle the situation in Afghanistan.

Jolie managed to shatter an Instagram record, becoming the fastest person to ever gain one million followers. In a matter of three days after joining the social media platform, the actress had accumulated more than 7.6 million followers – and the number keeps jumping every single day. 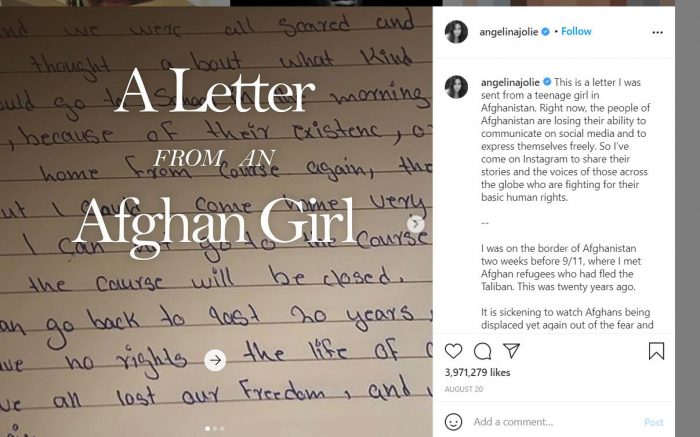 Within three hours of her viral anti-Biden post, Jolie attracted more than 2.1 million followers. That’s a lot of people to have followed her for her content in a matter of hours of joining the platform. Most people don’t have anything similar to the attention Jolie managed to muster by coming out hard against the way Biden handled the situation in Afghanistan.

“I was on the border of Afghanistan two weeks before 9/11, where I met Afghan refugees who had fled the Taliban. This was twenty years ago,” she wrote. “It is sickening to watch Afghans being displaced yet again out of the fear and uncertainty that has gripped their country.”

The Hollywood actress added, “To spend so much time and money, to have bloodshed and lives lost only to come to this, is a failure almost impossible to understand.” 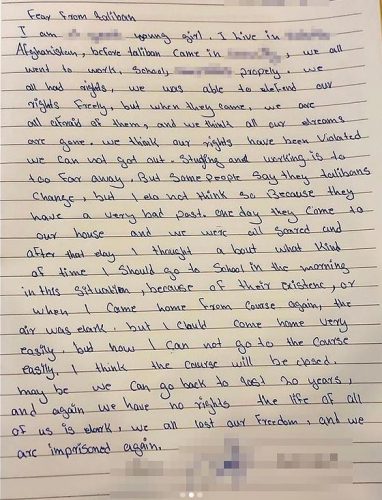 In addition to her work in movies, Jolie is also a writer for Time Magazine. In addition to her viral Instagram post, she also wrote a piece for the world-class magazine entitled “The People of Afghanistan Deserve So Much Better Than This.” In the article, she made it very clear that she was upset with the way America handled the removal of troops from the country.

“Whatever your views on the war in Afghanistan, we probably agree on one thing: it should not have ended this way,” she wrote. “Giving up the idea of a peace agreement between the Afghan government and the Taliban, appearing to cut and run, and abandoning our allies and supporters in the most chaotic way imaginable, after so many years of effort and sacrifice, is a betrayal and a failure impossible to fully understand.”

Jolie continued by blasting Biden for having “lacked the will to plan this transition in a managed way.” She opined that America’s exit from the country “could have been better, more decent, and safer.”

She wrote: “As an American, I am ashamed by the manner of our leaving. It diminishes us. We have lost leverage to influence what now happens in Afghanistan. We lack a strategy to monitor and support women and civil society in Afghanistan, who the Taliban have a history of targeting—banning girls from school, confining women to the home, and inflicting brutal physical punishments, including public lashing, on any woman perceived to have stepped out of line.

“Our allies are rightly upset, blaming the U.S. for a precipitate, unilateral withdrawal that missed the opportunity for any coordinated plan to preserve some of the gains made in the country. We have to acknowledge and address these realities if we are to have any hope of learning from this dark moment.”