Child Asked Kind Waiter If He Would Visit Him After His Surgery; He Showed Up With A Card And Gifts

When a child asked a kind waiter if he could come say hi to him after his surgery, the kind man promised he would be there and later showed up with a nice card and gifts.

Drew Lewis was working his shift at an Olive Garden in Cleveland, Ohio, when he waited on a family and their children. Drew noticed that the children were a bit wound up and that the parents seemed to be having a long day, so he did what he could to talk to and entertain the children.

“This past Friday evening I was I was at work at Olive Garden, which was weird because I haven’t worked a Friday night in a couple months. But this Friday was one of the best nights I’ve had at work in a long time,” Drew shared in a post online. “During my shift I had a family come in and sit at my table with 4 very wound up kids and their parents. I could tell the parents were having a long day, so I focused my service on the kids at the table to keep them entertained.”

Drew chatted with the family’s 8-year-old son for a while and asked him what his t-shirt that said “TommyStrong” meant.

“One child I connected with was a kid who reminded me of myself when I was 8 years old. He was wearing a #TommyStrong shirt that was purple and had orange lettering. I was curious on who Tommy was and he said that the T-shirt was for him.”

“So later in the dinner I asked him what the shirt was for and he told me that he was getting brain surgery on Monday. After that conversation I kept talking to the young gentleman about his surgery and what he likes and what he wants to do when he gets older. And to my surprise he said he wanted to be a police officer and a professional chef.”

Outside of working at Olive Garden, Drew is a student at the University of Akron’s Police Academy, so he was surprised to learn that Tommy also wanted to be a police officer. The two had an enjoyable conversation, and then before the family left, 8-year-old Tommy sweetly asked Drew if he could come say hi to him after his surgery.

“At the end of dinner Tommy asked me if I was busy Monday and if I could come to his surgery and be there when he gets out. I promised Tommy Gallagher that I would be there.” 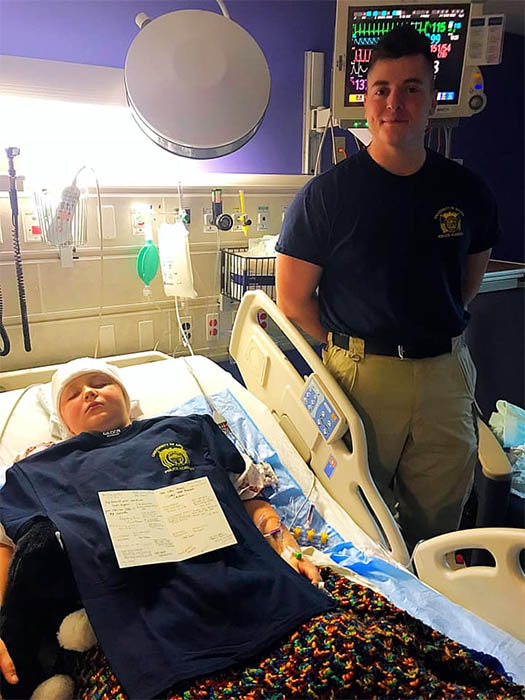 Drew showed up to Tommy’s hospital with a t-shirt from the Akron Police Academy and a card signed by his entire class and commanding officer, which wished Tommy and his family well. 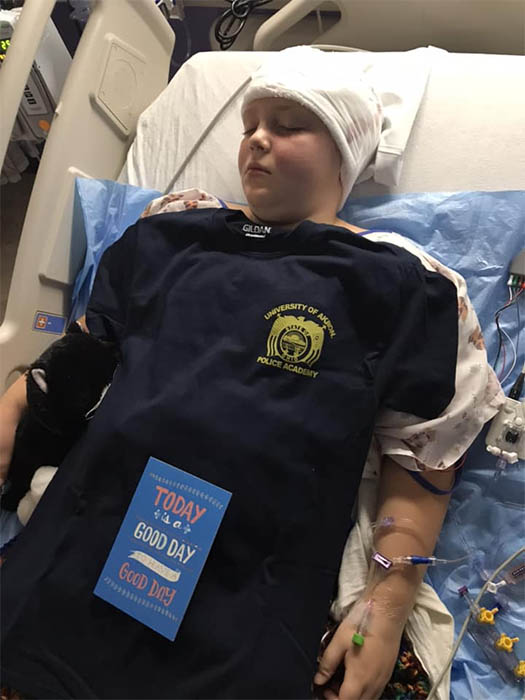 “He woke up after a successful 7 and a half hour surgery. He will make a full recovery and had no complications. This kid showed me how to be strong and handle the diversity life throws at you. Get well soon Tommy Gallagher. #TommyStrong”