Two young boys are showing the true power of friendship, love and acceptance, even if it is inadvertently. Their innocence stirred the hearts of people everywhere when they decided they wanted to pull a prank on their pre-kindergarten teacher. What they came up with showed not only how adorably mischievous the boys were but how they were truly color blind, and not in the medical sense.

In 2017, Kentucky resident Jaxon Rosebush, then 5 years old, had the sneaky idea to pull a prank on the teacher of his and his best friend, Reddy Weldon. He came up with a novel idea when his mother reminded him that he needed to get a haircut.

“He said that he wanted his head shaved really short so he could look like his friend Reddy,” Lydia Rosebush wrote on Facebook, according to CBS Miami.

“He said he couldn’t wait to go to school on Monday with his hair like Reddy’s so that his teacher wouldn’t be able to tell them apart,” she wrote in the post, which went viral. “He thought it would be so hilarious to confuse his teacher with the same haircut.”

Alongside her post was a picture of best friends Jaxon and Reddy. While both are about the same build and height, there is one glaring difference – Jaxon is white, and Reddy is Black.

“If this isn’t proof that hate and prejudice is something that is taught I don’t know what is. The only difference Jax sees in the two of them is their hair,” she ended her post by saying. 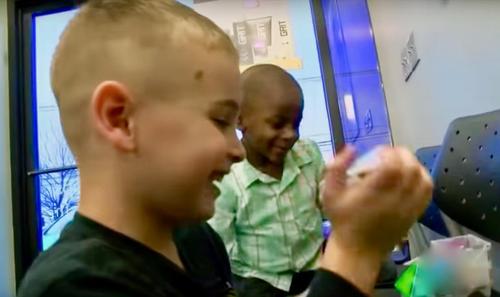 The innocence of the young boys touched hearts everywhere, and when the big day came to snip Jaxon’s hair, cameras were rolling to catch the friends taking the first step to pulling off their nefarious plan.

As soon as you see them, it’s obvious the boys are inseparable friends who love spending time with each other. Constantly laughing and simply having a ball in each other’s presence, they truly are like brothers.

Jaxon told his mom that if he got the same haircut as Reddy, then their teacher might mistake them for each other. She told CTV News, “He just said, ‘I’m getting it cut like Reddy. I’m going to look like Reddy,’” Lydia said.

Jaxon’s plan was simple enough: he wanted his teacher to see both him and Reddy in class, and with the same haircut, she would not be able to tell them apart and mix up their identities.

“I just laughed,” she said. “Jax is really funny and he just says funny things and he has no problem letting you know his opinion on things.”

Finding his innocent request was too sweet not to share with the rest of the world. She told her friends on social media about it, and soon the story went viral. 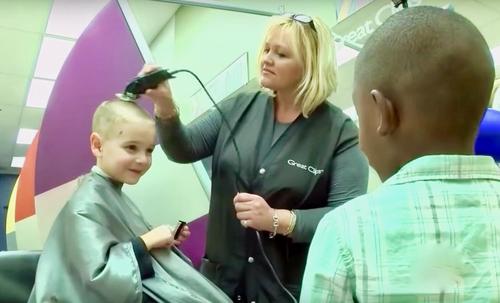 Jaxon’s mother told CTV News she was overwhelmed by the attention the story of her son and his best friend were receiving online but that it was a good indication that people see the goodness in others and appreciate such an innocent outlook on life.

“This is crazy. It’s been shared all over the world,” she said. “It’s complete insanity. … I think a lot of people, especially today, could learn from the innocence of children. Like, of course, they see that they’re different. They’re 5. They’re not stupid. They see each other, but they don’t care. It doesn’t matter.”

Online, viewers were taken by the friendship between the two boys and praised their wholesome ways.

“It takes two little boys to show people what love is. It’s a shame that everyone else can’t be like this,” one commenter wrote.

“So beautiful, a joy for the heart, racism of any sort is learned behavior, these boys are still perfectly pure!!” another comment read.

“That is just so precious! How sweet is it that they think the teacher won’t be able to tell them apart. This story makes my heart flutter. These boys obviously come from GREAT homes and have wonderful morals. They are gonna be awesome gentlemen when they are older especially if they continue to see each other and others like they do now. Love it love it love it!” another viewer wrote.

As for the master plan? Lydia said all went swimmingly.

“It’s been all over the news here so (the teacher) thought it was super cute and she played along with them trying to switch places,” Lydia said.

What do you think about Jaxon’s prank? Have you ever been surprised by the innocence of a child? Let us know, and be sure to pass this on to family and friends.