Controversial Message Scrawled On The Back Of An SUV Goes Viral

People all over the country share their beliefs and views by slapping bumper stickers on the back of their vehicles.

However, one SUV owner has shocked millions of Americans after posting a controversial message on the back of their truck.

An image of the back of the SUV was snapped by another driver who uploaded the image to Reddit, where many people commented on the message, with some even applauding the driver for sharing their controversial view.

The message on the back of the SUV stated the following: “This is America… we don’t redistribute wealth… we earn it!” 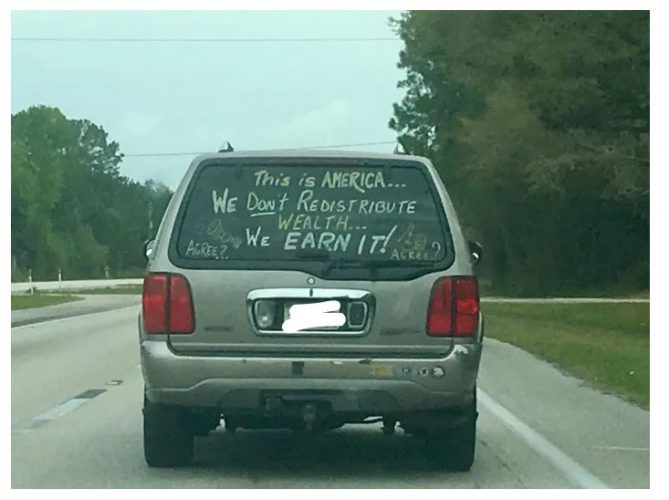 The Reddit user who snapped a picture of the message shared the image along with a note saying: “Saw this patriot while driving.”

While progressive politicians believe that the wealthiest Americans should pay more in taxes to support social services and programs, conservatives do not want to increase taxes on America’s richest citizens. Dozens of people shared their reactions on Reddit, with a lot of people showing their support for the SUV owner who wrote the message in the first place.

“Yeah, for the guy that has the guts to display this saying on his rear window!!!! More people should do/say the same exact thing, and just maybe it might get through to ALL—-well, some of the many freeloaders that think the world owes them a living!!!!” one reader commented.

“We are redistributing wealth by giving so much money to too many young people that can work but don’t want to. They, in turn, have too much free time on their hands, and some get into trouble.

Need to see cuts, and it would certainly help with our drug problems. They need to be worried about keeping a job to put food on the table, not their next drug deal!” another wrote.

“True words for true Americans,” another person wrote. “This should be on every patriotic American vehicle.”

On Reddit, more people argued that this message should be understood by more Americans.

“I don’t know why it’s so difficult for liberals to understand.

This nation was supposed to be unique in that the government stays out of our way so that we may be productive.

Every entitlement program is simply a means to redistribute wealth.

Stephan Molyneux is exactly right when he says government entitlement programs are a gross violation of our property rights,” one Reddit user commented.

However, the message was controversial for some readers.

These people argued that it’s not as easy as stated to earn wealth in America for certain people in certain groups.

“So let me get this straight, we’re trying to fight the one percent Globalists, but are cool with these same Globalists hoarding all of our resources? Sick logic, guys…

There is nothing wrong with bringing nuance to an argument instead of going ‘hurr durr, f**k these cucks wanting handouts’ without fully grasping the situation.

Being able to sustain yourself is what everyone should strive for.

I don’t want any handouts, but seeing things in black and white doesn’t do either side any good,” one user wrote.