Gracie isn’t scared to show her natural body.
Her father talks about being proud of her.

Tim McGraw wears many hats, from singer and songwriter to producer and actor. He has been married to fellow country music star Faith Hill since 1996, and they have three daughters. McGraw and Hill have many awards and accolades to their names but are most proud of their girls.

Maggie McGraw, born on August 18, 1998, is the second daughter who graduated from Stanford University in 2021 with a Master’s degree. And the baby of the family is Audrey McGraw. Born December 6, 2001, she graduated from high school in June 2020. Since then, she has modeled for a fashion campaign and appeared in a music video for her dad’s song, “7500 OBO.”

Gracie McGraw is the eldest of the brood. Born on May 5, 1997, the young lady is a graduate of NYU. Following in her father’s footsteps, she moved out on her own to pursue her acting career and has since appeared in Tyler Perry’s “If Loving You Is Wrong.” Posting about his daughter, the “Friday Night Lights” star said:

“Gracie, our oldest daughter, is an actress in L.A., and she makes me proud every day because she’s such a strong, independent young lady who speaks her mind.”

McGraw, who is still in awe of how fast his daughters have grown up, is inspired by how each of them is branching out and cutting her own path. The joy of any parent raising kids in show business is to see them grow into level-headed adults who respect themselves and others.

Describing his eldest daughter, the “Flicka” actor said Gracie is sweet, talented, and has “a crazy big heart” in an Instagram post marking her 25th birthday. He encouraged her to keep chasing her dreams and being an inspiration.

The young singer has become something of a body-positivity advocate, showing others how to love and evolve in how they view their bodies.
Friends and fans of the stars joined in wishing Gracie a happy birthday even as she posted her own photos and videos celebrating with friends in Mexico. The talented young lady seems to be making inroads into the entertainment industry with her parents’ support. 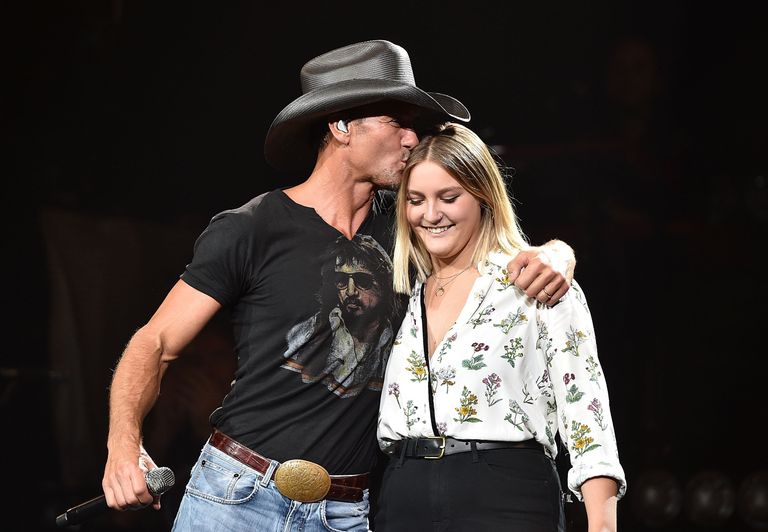 McGraw invited Gracie to sing with him on stage during one of his shows back in 2015. The father/daughter duo sang “Here Tonight,” one of the titles on his “Damn Country Music” album. Speaking about how he and his wife support their daughter’s aspirations, he said:

“The more Faith and I talked about it and really started digging into it [we realized] how much it made sense to us and our family and our beliefs, and how we want our daughters to be represented.”

The couple made an effort not to force their children to do anything but to allow them to find their way. McGraw, who also posted a road-trip duet with his daughter singing a ballad by Barbra Streisand and Barry Gibb on YouTube, is obviously impressed by Gracie’s strong, melodious voice.

Criticized for Her Body

Gracie loves documenting her life on Instagram, but the ones that show off her natural body tend to receive the most attention. One netizen who felt that her photo was too revealing said that she didn’t get the point of her “showing her body to thousands of people.”

There seems to be so much aimed at making young women feel bad for not reaching an unattainable goal.
Others have gone as far as to make an unfair comparison between Gracie and her mother, who, at 55 and after three kids, “looks like a model.” Commenting under candid shots of her body, one even called the young lady “extremely unhealthy.”

But the eldest McGraw girl is comfortable in her own skin, even with stretch marks, rolls, and cellulite. She captioned a mirror selfie wearing a two-piece bathing suit with a quote from Norah Ephron, adding:

“I’ve never been comfortable in a bikini but I got this one for $10 and I’m feeling glorious.”

She seems to take the negative comments in stride and has her fair share of fans who think she is beautiful and relate to her authenticity. They encourage her to keep posting and ignore the haters and trolls.

Tim McGraw’s Daughter Defends Her Body
The young singer has become something of a body-positivity advocate, showing others how to love and evolve in how they view their bodies. Speaking about how she learned to accept the parts of her body that she had wished to change, Gracie said:

“I was always deemed as ‘unhealthy’ because I had a little more weight on me, which really made me question myself more and more. In reality I was actually a healthy person but what was truly unhealthy about me was the way I was thinking.”

Gracie also shared her observation that clothing stores are not inclusive. Many fail to carry clothing sizes for fuller-figured women. Some staff body shame women who wear larger sizes. This discourages some from shopping and damages their confidence.

And most stores have followed a trend of making their clothes smaller than before so that even though one does not gain any weight, they have to go up a size or two. This makes the consumer feel that they are bigger than they really are.

There seems to be so much aimed at making young women feel bad for not reaching an unattainable goal. But Gracie has said the trick is not to entertain the negative thoughts. Remember, you are more than your dress size.

Whether you have cellulite, rolls, dips, or dimples, your “flaws” are beautiful. She says that when you focus on the positive, you will begin to appreciate yourself and remember to smile again.

From telling a story about how she gave herself a disastrous haircut to describing how a rude clerk made her feel unwelcome in a clothing store, Gracie McGraw uses her voice not just to sing, but to make her followers think, laugh, and learn.