Demi Moore is an icon in her own right, and after celebrating her milestone 60th birthday in November 2022, she’s defying cultural norms and feminine expectations with a new swimwear line honoring health and beauty at any age.

Moore made her leading lady debut in “Ghost,” where she starred alongside Patrick Swayze. Her performance earned her a Golden Globe nomination. Goldberg ranked “Ghost” as one of Moore’s most outstanding performances, while her roles in “A Few Good Men” and “About Last Night” were ranked second and third.

Ever since then, she’s dominated the screen, appearing in movies such as “Striptease” and “G.I. Jane.” At one point in the late 1990s, she was the highest-paid actress in Hollywood. She later enjoyed a resurgence with supporting roles in movies including “Charlie’s Angels: Full Throttle” and “Rough Night.”

Moore has been married three times, first to Freddy Moore, then to fellow superstar actor Bruce Willis and lastly Ashton Kutcher. These days, you’re most likely to find her chilling at her Idaho home with her family. Now, the star is set to take on a new and exciting role in life – being a grandmother. 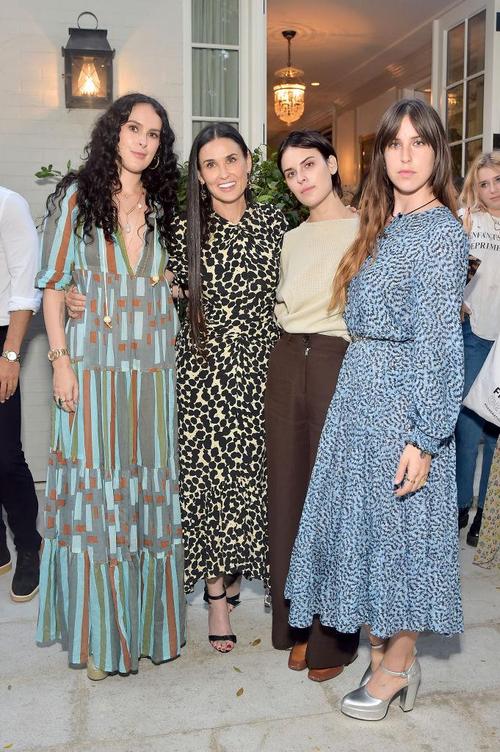 It’s safe to say Moore knows the importance of family and friendships more than anyone after all the ups and downs she went through over her life. Now at 60 years of age, she enjoys a good relationship with all her daughters, her ex-husband Willis, his wife Emma Heming and their children Mabel, 10, and Evelyn, 8.

Willis and Moore’s love story began in 1987. The pair tied the knot in November of that year and welcomed three daughters into the world: Rumer, born in 1988, Scout, born in 1991, and Tallulah, born in 1994. While Moore and Willis appeared happy in the public eye, there were some complications behind the scenes. They shocked the world in June 1998 when they announced their separation and filed for divorce two years later.

Despite their split, Willis and Moore continued to co-parent their daughters to stunning effect. In an interview with Larry King, Rumer said, “I never had to split up vacations or split up birthdays.” She went on to say they always did events as a family unit. “They always made an effort to do all of the family events still together and made such an effort to still have our family be as one unit, as opposed to two separate things, which I think really made an impact.”

Alongside Willis, Heming and their children, Moore’s big blended family gets along well and even regularly takes photos together for social media. Photos posted by Moore and their daughters on Instagram showed the entire family hanging out at home as one unit for 2022’s year-end holiday season. Now, the “Indecent Proposal” star is set to add a new member to the already large family in the form of her very first grandchild. 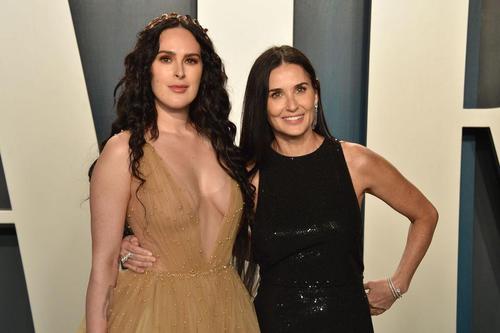 On Dec. 20, 2022, Moore’s eldest daughter Rumer took to social media to announce her impending pregnancy with her partner Derek Richard Thomas with a carousel of black and white photos. Captioned simply with a sprout emoji, one photo showed Thomas giving Rumer’s baby bump a kiss and another with his face full of joy and excitement. A third photo showed Rumer’s silhouette with the bump in full view as she stood by a window.

The “Once Upon a Time in Hollywood” actress and Thomas, a musician and producer, confirmed their romantic link with adorable social media posts, with Rumer hinting at their burgeoning relationship in May 2022, which was all but confirmed by Thomas in a touching birthday post which he captioned: “In the short time we’ve been together you have filled my life with joy and peace. Everything is just so easy with you. We sing, we dance, we play and most of all we laugh. Thank you for being you 😘 you’re a magical human I’m so glad you came into my life :-)”

The child will be Willis and Moore’s first grandchild.

The photos were reposted by proud mom Moore, who delightfully captioned her post, “Entering my hot kooky unhinged grandma era 🌱” Scout followed suit in her repost of the photos, and wrote, “🌱Activating hot, kooky, unhinged Aunt Scout era 🌱” while she thanked Rumer and Thomas “for co-creating my new best friend.” In the same vein, Tallulah, too, reposted the photos, with the caption, “entering my hot kooky unhinged auntie era 🌱”

Not to be outdone, Heming also celebrated her stepdaughter’s good news, reposting the photos with the caption: “Baby news is happy news!!! Congratulations @rumerwillis and @derekrichardthomas We are elated over here! 🐣” showing once again just how strong the Willis, Moore and Heming family unit is.

We’re so happy for Moore and her impending grandmotherhood! What are your thoughts on her huge blended family? Let us know, and be sure to pass this along to friends and family, too.