“Band of Brothers” star Donnie Wahlberg proves himself worthy of love and admiration from fans and his family. The actor became “another dad” to his second wife’s son, who the biological father abandoned upon the diagnosis.

Donnie Wahlberg is related to the well-known Hollywood actor, Mark Wahlberg. However, he has also established a career in music and acting through determination and discipline.

He was married to Kim Fey, who he had known for five years prior, and together they welcomed two sons. Fey and Donnie met when the latter searched for a Spanish speaker to jump in on one of his brothers, Mark’s tracks.

Unfortunately, Donnie’s marriage to Fey, his longtime friend, and partner, failed in 2008 when they jointly filed for divorce, citing irreconcilable differences.

The Ventura county courthouse handled the case, and eventually, both parties reached an out-of-court settlement. The mother of his sons, Xavier and Elijah, requested primary custody with visitation rights for their father. She also sought spousal support and attorney’s fees.

Following the divorce, the exes remained friends, co-parenting in a healthy atmosphere. However, it took quite some time before Donnie became involved with another woman—Jenny McCarthy, whom he met in 2013.

Jenny McCarthy, an actress, and TV personality, also experienced a failed marriage before meeting Donnie, her current husband. The former “Playboy Playmate” star met her ex-husband, film director John Asher in 1999 when he directed her in “Diamonds.” 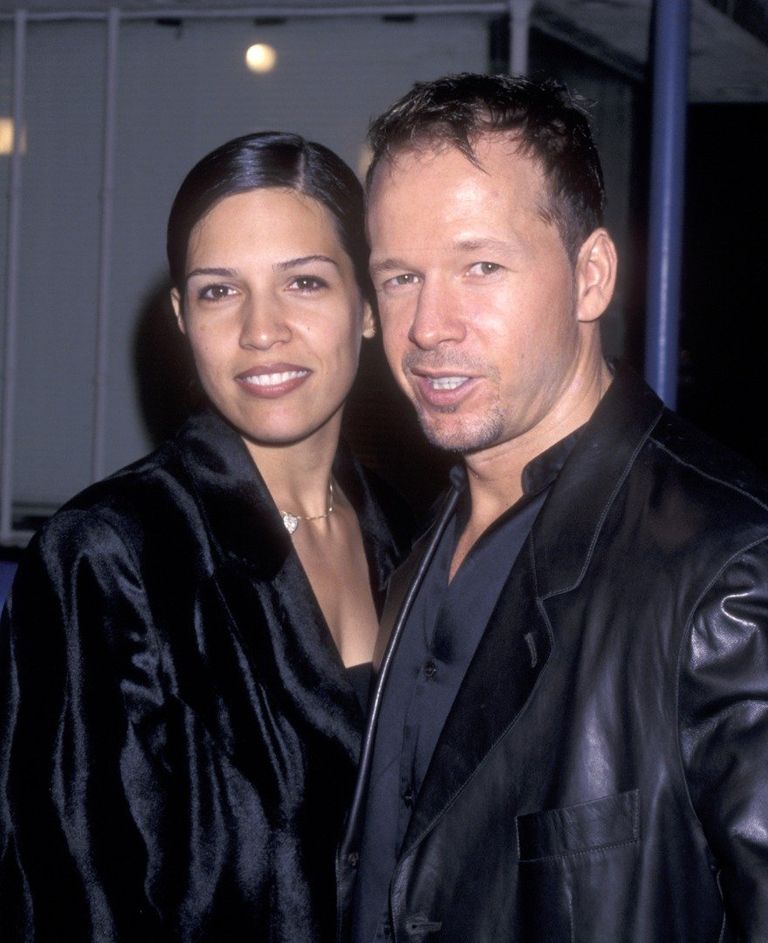 The duo tied the knot that same year and later welcomed Evan, diagnosed with autism. They remained married for six years, but in 2005, McCarthy filed for divorce, citing irreconcilable differences.

In her book “Louder than Words: A Mother’s Journey in Healing Autism,” she shared tales of her marriage and how everything changed after her journey to motherhood.

McCarthy’s son was diagnosed with autism in 2005, and at first, she was more stunned than sad. Still, it did not get in the way of her love for the young man.

The actress put up a bold face while working on shows, paying attention to her son, and taking him for regular checkups and programs at UCLA. 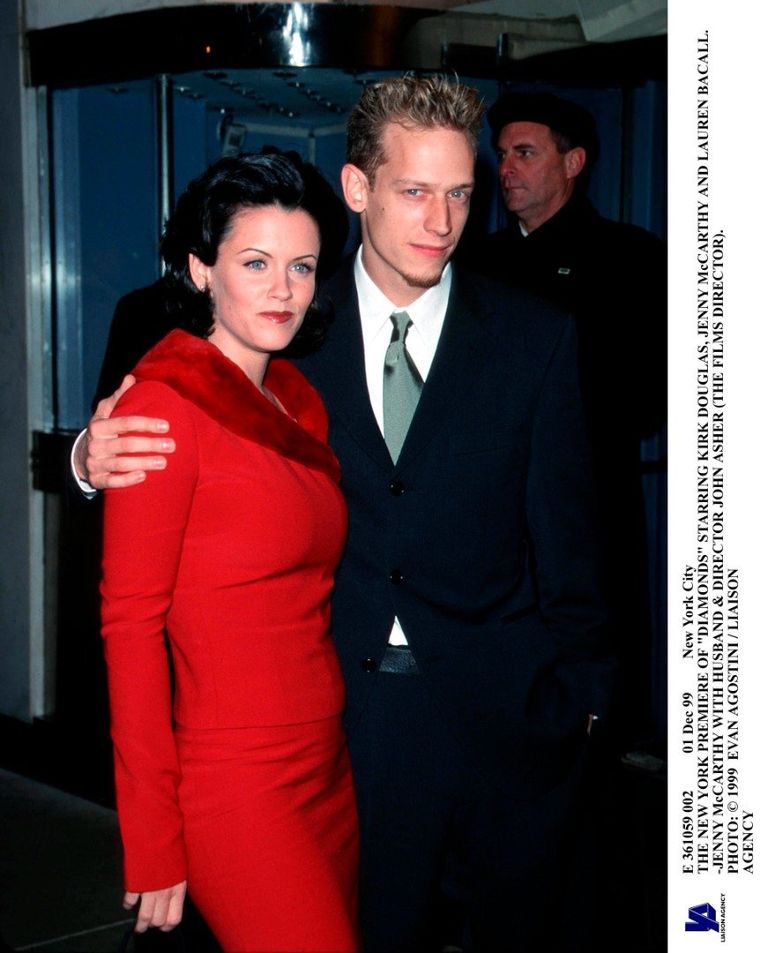 It strained her union with the director, and it fractured their bond. While recalling the reasons for their split, she said:

“John was starting to get angry at me because he felt ignored. The only fantasies I wanted to imagine were Evan being able to say, ‘I love you, mommy.’ I didn’t care if I never had sex again.” 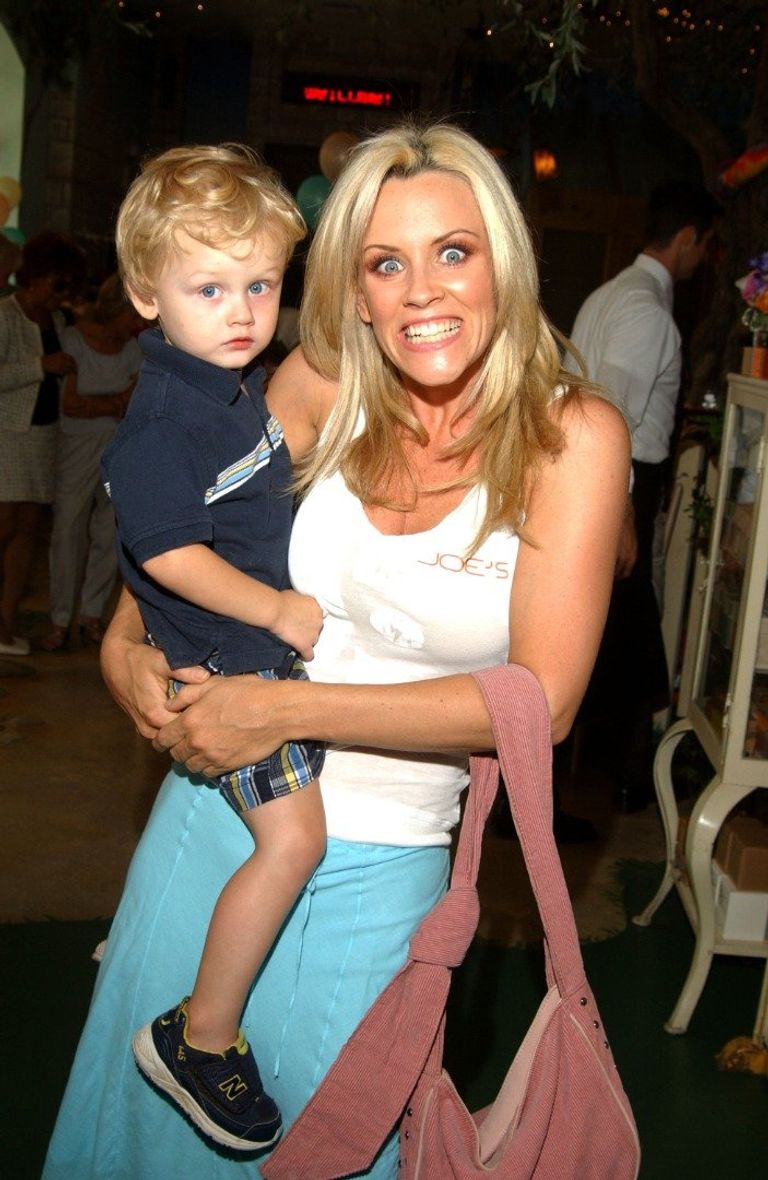 At McCarthy’s request, Asher moved out of their home, and she continued to pay their son’s hospital bills independently. Following the end of her marriage, the actress fell in love with comedy actor Jim Carrey—a more concerned lover who shared a likeness for Evan.

That was not all; Carrey was so expressive with his love for his beloved partner that he hired a helicopter to write a heart-melting message for her on one for their Valentine’s Day celebration. 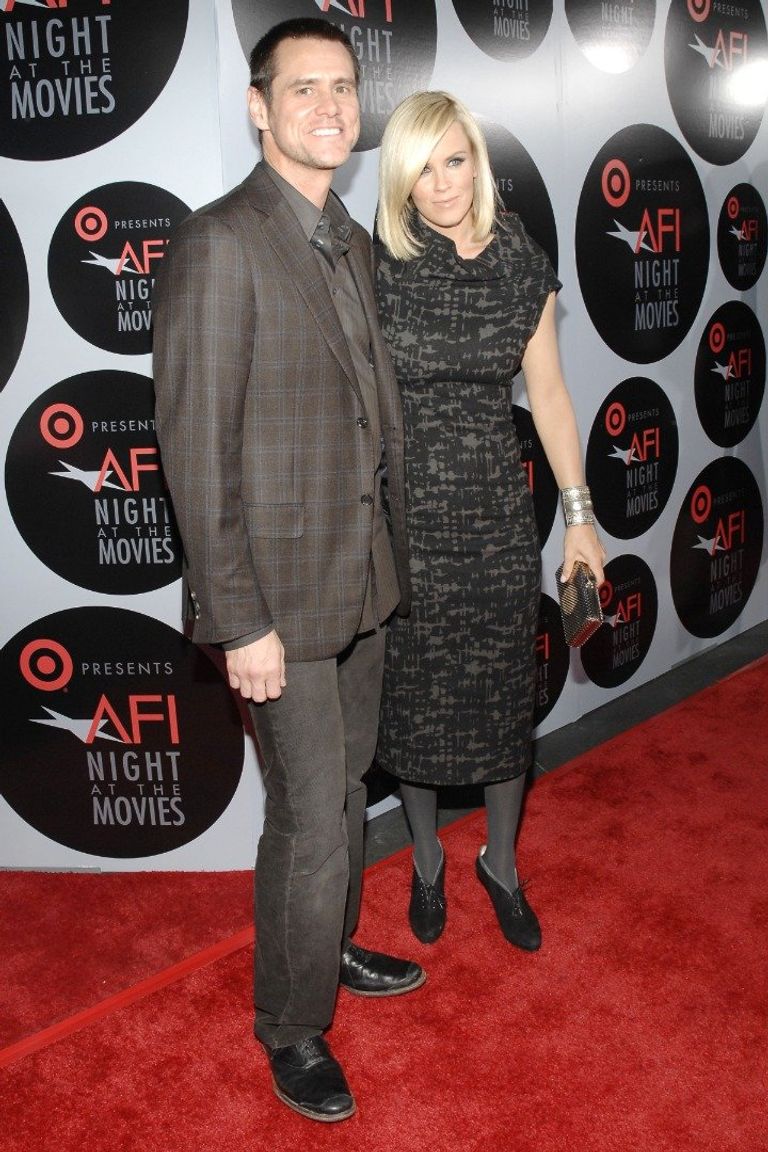 Despite their promise of never getting married, they displayed immense commitment in the relationship. Carrey admired Evan, his lover’s son, while McCarthy shared a great affection for Jane, the actor’s daughter from a previous relationship.

The couple’s love story earned lots of “awws” and “wows,” and when it ended in 2010, fans found it shocking to accept. The former lovers did not engage in a nasty drama but shared a warm message announcing their separation and continued compassion for each other. 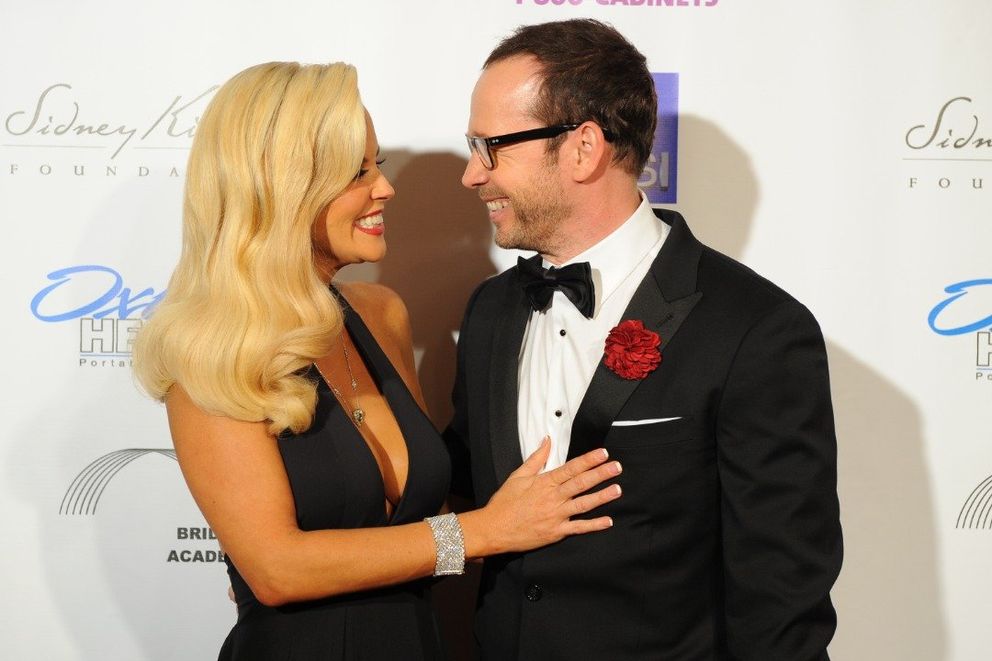 McCarthy’s seemingly perfect relationship was filled with a few struggles. Consequently, the TV personality explained that Carrey stopped seeing her son and failed to adjust after telling him.

Another reason that might have contributed to the failed relationship was Carrey’s depression, which he openly admitted to battling. Again, McCarthy shared that the connection became dull and was less fun. 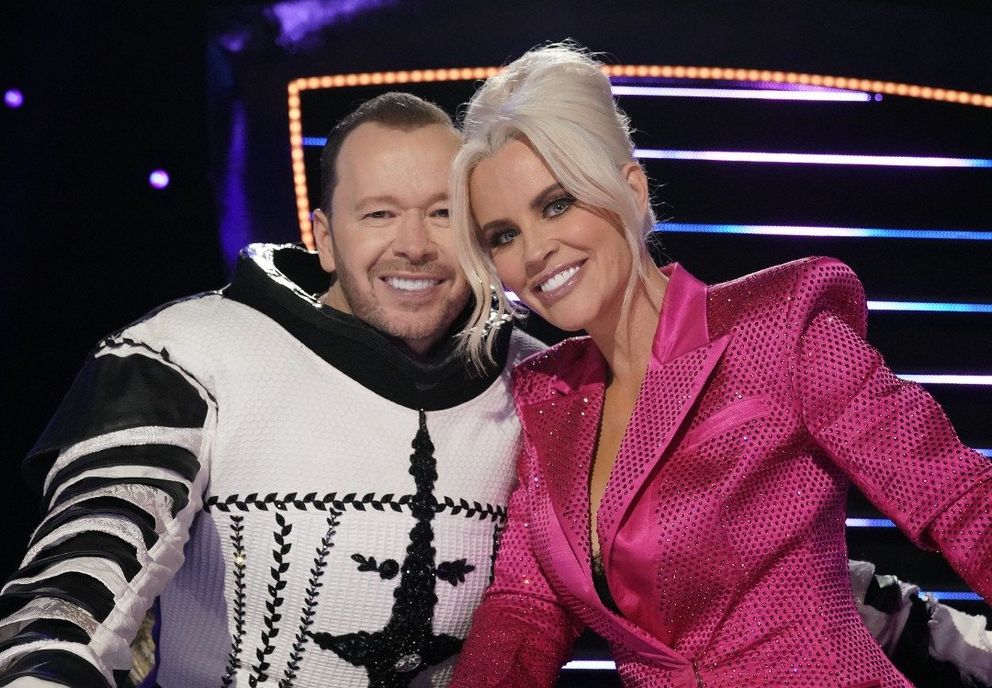 Donnie and McCarthy had a similar story. The TV stars had both wed in 1999 and shared an offspring with their exes.

When they met in 2012, Donnie was smitten with the onscreen star but only made a move a year later, after reuniting on “Jenny McCarthy Show.” 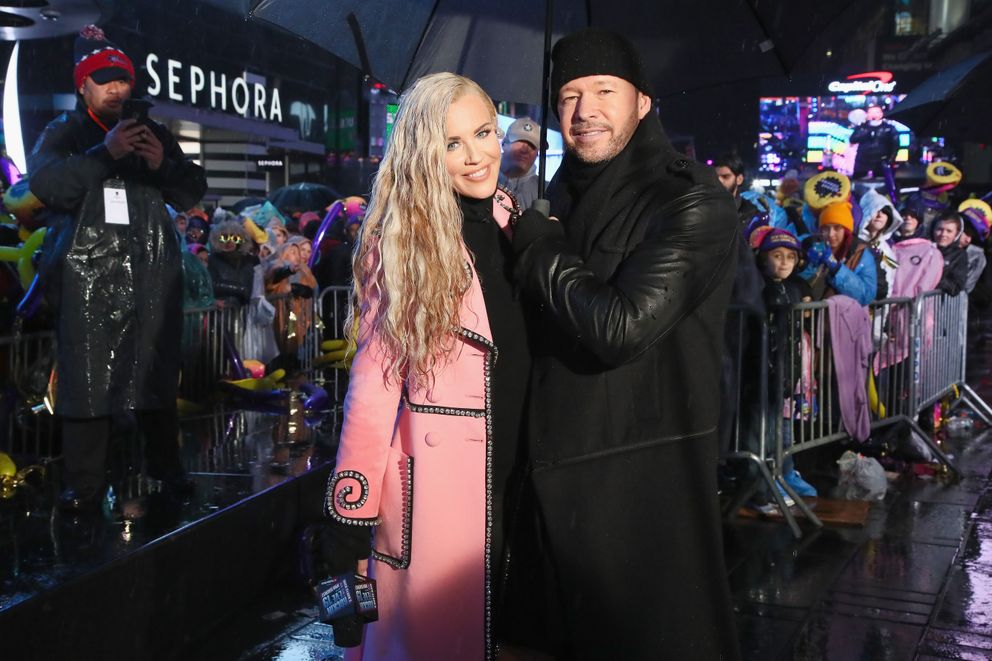 In 2014, the couple became engaged. Evan helped Donnie with the proposal, showing that the actor was very acquainted with him. McCarthy’s version of the surprise proposal was adorable.

According to her: “This weekend I was sitting with Donnie … and he went into the other room and out came Evan with a card that said ‘Will’ and he handed it to me.”

She continued: “Then Evan ran away, and Evan came in with a card that said ‘You.’… I just started crying, and then Evan came back into the room with the word ‘Marry’ — but spelled wrong.” 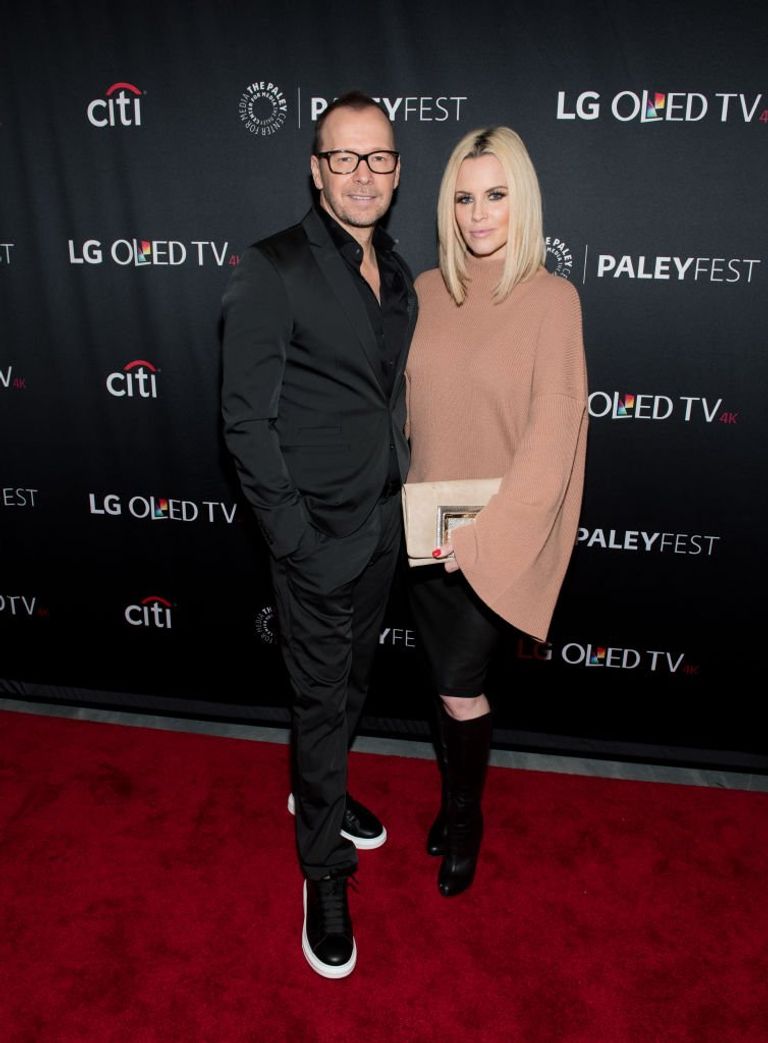 In the end, she figured it out and excitedly screamed, “Yes!” Evan supported her by adding, “I have another dad,” which made it a moment filled with emotions.

Before the year ended, they married at a Sunday wedding ceremony in St. Charles, Ill. Chicago, with the little man present to walk his mother down the aisle.

Ever since becoming a family, Donnie has been in awe of his wife. The singer is constantly serenading her with praises that show a happy family.

In his words: “Besides being the best wife that I could have ever imagined having, she’s also the best stepmom and mother. She’s a great partner, and to simplify it, having someone to build traditions with my children and it being Jenny is probably the thing I’m most grateful for.”

Similarly, McCarthy sees her husband as the best husband and father, with whom she renews her vows annually. The power couple claim that it helps ignite the “new love” spark in their marriage.

Like Donnie, the actress also comments on the features that keep him on the top of her list. Expectedly, it concerns his compassion towards Evan, her autistic child.

In 2019, the mother of one gushed about how her husband surprised her with an overwhelming Christmas gift. She said:

“One Christmas, early on, Donnie handed me one of the greatest gifts ever, which was…that he was taking care of Evan’s college tuition.”

RELATIONSHIP BETWEEN EVAN AND HIS “OTHER DAD”

As a father of two sons, Donnie did not find it difficult connecting with another boy; however, Evan made it very easy. The “Band of Brothers” star confessed that he shares a deep bond with his “affectionate” stepson and connects in ways McCarthy would never dream of.

He also compared the connection between his sons and his wife, claiming that they keep a healthy and lively communication and closeness.

Donnie’s relationship with Evan brings McCarthy great joy; she’s expressed her fear of finding the perfect man in the past. After almost a decade of marital bliss, the mother of one consistently commends her husband for being the ideal and most incredible guy.

The admirable duo experienced a home filled with love, sacrifices, and understanding and would not jeopardize it for anything. In 2017, they talked about not expanding their family to enjoy their golden years and the parenthood of their growing sons.

JOHN ASHER ON HIS AUTISTIC SON

The way Evan’s parents handled his diagnosis strained their marriage, and the film director confessed that he made some mistakes following his failed marriage with McCarthy.

Years later, Asher confessed that he dealt with the diagnosis differently from his ex-wife, which led to their divorce.

Both father and son now have a good relationship, and Asher has used his platform to enlighten other parents. For example, while speaking about his movie “A Boy Called Po,” made in honor of his son, he said:

Asher remains unmarried but has focused on strengthening his bond with his only child. Thankfully, Evan has the best care he could dream of, loving parents, a caring stepdad, and amazing step-siblings!