When a young girl lost her leg after a brutal shark attack, she remained courageous through the ordeal and didn’t let the tragedy dull her spirits. But only 24 hours after amputation, the brave teenager did something that surprised everyone around her.

They say life is what happens to us while we’re busy making other plans. It’s true that life is unpredictable and filled with endless surprises, many of which ambush us when we least expect it. Still, life is a precious gift that should never be taken for granted because we only get it once.

Nothing lasts forever, but sometimes, we might forget it when going through challenging times; good and bad experiences are a part of being alive. Interestingly, the story we’re sharing today is about a youngster who refused to give up in the face of adversity.

On June 30, 2022, Addison Bethea, 17, was out looking for scallops in shallow Taylor County waters near Keaton Beach, Florida, when she met with a tragic accident. A nine-foot shark was said to have attacked her, clamping down on her right leg.

The youngster said she hopes to get back in the waters once she’s fully recovered.
But instead of feeling scared, the teenager tried her best to fight off the shark and loosen its grip on her leg. Addison said she used her knowledge to punch the shark in the nose, but when she couldn’t do it, she started poking its eyes.

Despite her best efforts, the Florida teen couldn’t get rid of the shark, and when she tried to latch it off, she was bitten in the hand. That was when she screamed in pain, which alerted her brother, Rhett Willingham, 22, a firefighter and EMT.

Without wasting time, he ran toward the waters and saw his sister struggling to save herself. Willingham said he sprang into action, fought off the shark, and pulled Addison onto another boat. Afterward, he applied a tourniquet to her leg and took her back to the shore.

Addison said she was fortunate that her brother was nearby and that he took her to safety as quickly as possible. Soon afterward, she was airlifted to Tallahassee Memorial HealthCare.

The Florida teenager expressed that she knew her brother would come to her aid because he had always played the role of a hero in her life.

According to the Bethea family, Addison underwent two surgeries at TMH to save her leg, but due to the severe damage done to her thigh area, the doctors said they would need to amputate part of her leg.

Per the hospital, the surgery would enable the teen girl to use a prosthesis for her lower leg. Eventually, Addison had a successful surgery in which her right leg was amputated just above the knee.

Per Addison’s mom, Michelle Murphy, she became a little emotional when she first learned about the surgery. Still, she ultimately embraced it and has managed to stay positive amid the ordeal.

Despite the devastating injuries, Addison seemed upbeat as she lay in her hospital bed, surrounded by toy sharks. She told CNN:

“Everyone who knows me knows I take humor in everything, so, yeah, I just like stuffed sharks. Just making light of the situation.”

Addison’s father, Shane Bethea, expressed that while it was difficult to see his daughter in pain, he felt good to see that the incident didn’t dampen her spirits. He also thanked the TMH staff for caring for his baby girl. He wrote:

“The surgeons and the medical staff can’t get enough praise from us for the wonderful care of our baby girl.” 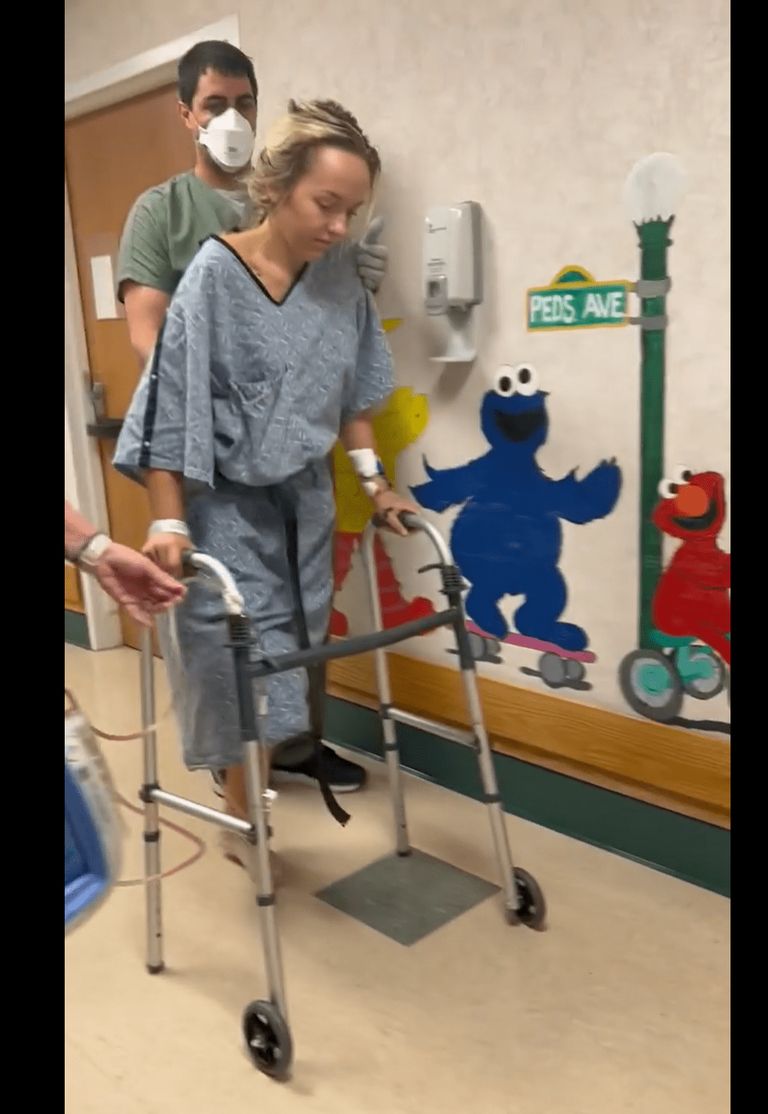 On July 7, 2022, the Bethea family posted an update on their daughter’s recovery on Facebook, where the teenager was seen taking her first steps using a walker. The caption read:

“Our girl took her first steps today and managed to make it all the way down the hallway! She is such a warrior, nothing is going to stop her from gaining back her life.”

ON THE ROAD TO RECOVERY

Even though Addison still has a long road to recovery, her family is overjoyed with her incredible progress. Per a statement from TMH, Addison, a cheerleader and tennis player, is in excellent physical condition and her vitals are strong.

A GoFundMe page has been set up for the teenager to help cover her medical expenses. More than $73,000 of the $100,000 goal has been raised, and donations continue to come in.

The youngster said she hopes to get back in the waters once she’s fully recovered. We are in awe of this brave teenager’s energy and good spirits, and we hope she recovers soon.

While many young people would have given up in similar situations, Addison is a warrior for choosing to stay strong even after losing a leg. Please share this story with your family and friends to show your support for this young girl.