Hero Boy Who Saved Sibling In Dog Attack Feels Face Scar Is ‘Something To Be Proud Of,’ Says Father

“Captain America” star Chris Evans took the time out of his day back in July 2020 to send a personal video message to a 6-year-old boy named Bridger Walker after the youngster rescued his little sister from a dog attack. In the process of saving his little sister from the charging German shepherd, he was bitten on his face and needed 90 stitches. Evans, Captain America himself, made sure to tell the young man how heroic his actions were. And, to make Bridgers day, Evans sent a “Captain America” shield to the youngster, who lives in Cheyenne, Wyoming.

Evans, along with other celebrities, first heard about Bridger’s heroism on Instagram, where his aunt, Nicole Noel Walker, posted photos of Bridger with his sister, along with a caption that explained the incident. Like Evans, fellow Marvel superstar Tom Holland, the British actor who plays Spiderman, wanted to honor Bridger’s real-life heroism, and so the actor called Bridger to personally commend his actions.

Almost two years after he risked his life to save his sister, Bridger’s father, Robert Walker, opened up to People Magazine regarding the young man’s recovery, the outpouring of support he and his family have received and what’s in store for the future.

As graphic photos taken after the incident show, Bridger’s face was severely swollen and cut-up due to his encounter with the rogue German shepherd. Bridger will likely have a scar on his face for the rest of his life — but the young boy seems to think it was all worth it.

In his interview with People, Bridger’s dad told the publication that his son doesn’t even want the scar to fade all the way.

“My wife and I asked him, ‘Do you want it to go away?’ And he said, ‘I don’t want it to go all the way away,’” Robert told People. “Bridger views his scar as something to be proud of, but he also doesn’t see it as being representative of his brave act. He just perceives it as, ‘I was a brother and that’s what brothers do.’ It’s a reminder that his sister didn’t get hurt, and that she is okay.”

“It almost bothers him sometimes when he’s called a hero, because he [thinks], ‘Maybe I could have done more to shield her,’” the father of five added.

Bridger was rewarded for his selfless bravery thanks to his aunt’s viral Instagram post. After detailing Bridger’s story in 2020, celebrities from across the Marvel universe made it a point to thank Bridger for his heroism. But beyond the world of Marvel superheroes, Bridger also received vital help from medical practitioners. In an act of kindness, New York City-based dermatologist Dhaval Bhanusali offered to provide free treatment to the boy’s face and fly him to his office on the East Coast.

“We still have a little bit more work to do on the superficial, redness part of it, but structurally everything looks so much better,” Bhanusali told People. “I always told Robert, ‘When Bridger’s in junior high or high school, I want this to be a story he tells, not a memory he has to relive every day.’ And I think we will have that situation.” 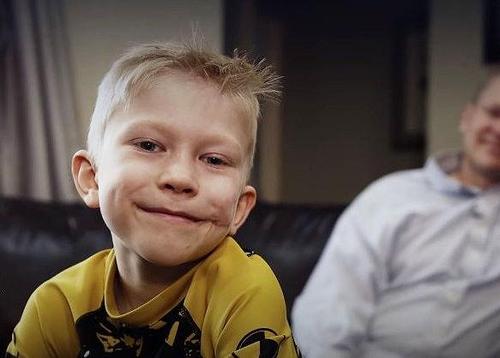 With all of the positivity surrounding Bridger’s heroic act, the family said that receiving videos from stars has been life-changing for Bridger. “Chris Evans, his video was amazing and he sent the shield. Bridger couldn’t have been more delighted,” Robert said.

“When he talked to Tom Holland, he was probably the most starstruck because that was a live call so that one certainly left an impression… His emotional recovery was really a worldwide effort and that was so special to us,” the proud dad added. Robert admitted that the family was blown away by how many people reached out following the injury.

“For thousands — if not millions — of people to reach out from around the world, to a stranger that they’ve never met because they’re concerned about the wellbeing of a 6-year-old boy in the middle of Wyoming… there’s something special there,” he shared.

Not only has Bridger received endless praise, but his surgeries have also left his injuries and his face nearly brand new.

“In a year, Dr. Bhanusali and Dr. Maughan have been able to take care of the scarring almost completely,” Robert said.

“Our primary concern coming home from the hospital was, ‘Is he ever going to have a smile again, or is it always going to look injured?’ And now, seeing his smile perk back up, that was more than we could have hoped for,” he revealed.

Bridger’s dermatologist, Dr. Bhanusali, said Bridger is the bravest kid he has ever met.

“I probably showed more pain in my face doing it than he did,” he said. “That kid is the bravest little dude I’ve ever met in my life. I don’t think people quite understood the level of injury it really was.”

What do you think of this young man’s heroism? Did you hear about his story when it first came out in 2020? Let us know — and be sure to pass this on to friends and family members.