While children can sometimes be a handful, it’s easy to forget that they, too, are capable of amazing feats. Some perform beyond expectations academically or in sports or the arts. And then, there are those extra special boys and girls who are hit with tragedy at such a young age but manage to overcome them with unexpected bravery, patience and persistence.

This was the case for little Henry, who was diagnosed with leukemia in 2020. The young boy endured 865 days of treatment, comprising 42 rounds of chemotherapy and 23 blood transfusions, before finally being declared cancer-free.

In honor of Henry’s remarkable achievement, the Little Wishes team at the Children’s Hospital at Erlanger in Chattanooga, Tennessee, organized a mini-celebration. In an adorable viral video taken during the gathering and posted on May 27, 2022, Henry can be seen jumping up and down with a big smile on his face as the staff around him clap and cheer. He was also wearing a T-shirt emblazoned with the words “cancer-free” to mark the special occasion.

As the staff sang “No more chemo for you, no more chemo for you” to the tune of “Happy Birthday To You,” Henry was seen sitting beneath a banner that reads “SURVIVOR.” Many of the staff are seen filming the joyous moment on their phones, happy to see Henry himself so happy.

The camera then pans to his emotional mother, who is seen wiping away tears of joy and relief after Henry and their family’s long and hard struggle against the disease for more than two years. 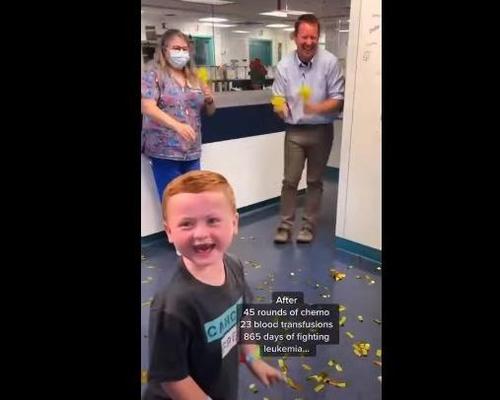 After the staff finish singing, they give Henry a huge round of applause that he thoroughly deserves. Laughing and smiling, Henry jumps up and runs around the room, waving golden decorative pom-poms.

The staff then shower him with shining golden confetti, to the delight of the happy boy. He is then urged to ring a bell set against a wall with the names of other cancer survivors. In his eagerness, he overlooks a request for a picture with the bell and proceeds to ring it, drawing laughter from the crowd.

But that wasn’t all as, close to the end of the video, Henry is seen helping the staff sweep up the confetti on the ground, showing his sweet and considerate nature. The video ends with a photo of Henry signing the wall, marking the end of his treatment at the hospital and happier days ahead.

Many were moved by Henry’s story after CBS News tweeted the video, with comments wishing Henry well and praising his achievement.

@TonyThompson also lauded Henry for helping to clean up after the celebration, saying:

“The kid’s a superhero.”

Henry’s journey is truly remarkable, and his end-of-treatment celebration is the perfect beginning to a new chapter in his cancer-free life. We are excited for Henry to take on the world with the same joyful energy, infectious smile and laughter shown in the video. Here’s to Henry!

What did you think of Henry’s reaction in the video? Did it make you laugh or cry –— or both? Let us know and pass this on to someone who needs something to smile about!