After King Charles banned Duchess Meghan from being by the Queen’s side on her deathbed, Prince William, her husband’s older brother, extended an olive branch when he invited Harry and his wife to the Windsor Castle walkabout showing how he, the future heir to the monarch, was living by his late grandmother’s example. The foursome, including Princess Kate, surprised the public when they reunited after the Queen’s passing weekend.

Ever since the Duke and Duchess of Sussex stepped down from their senior royal roles in 2020, they’ve given interviews that put the Royal Family in a bad light. During their visit to the United Kingdom (UK), while touring Europe, the couple stayed not far from Prince Harry’s older brother, Prince William.

However, the Daily Mail said they hadn’t expected to see any Royal Family members until the Queen’s health took a turn on September 8, 2022. William flew in via private jet with Prince Edward, his wife Sophie, and Prince Andrew. 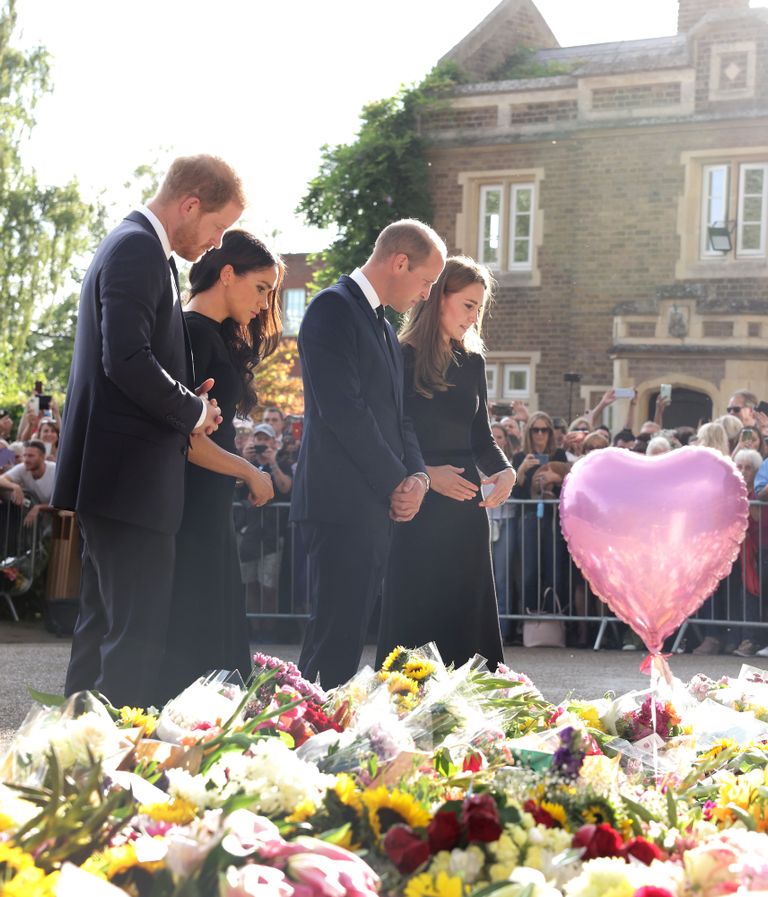 According to the publication, the foursome failed to arrive at Balmoral Castle, Scotland, before the monarch passed. Harry was expected to have flown in with the group but arrived separately and without his wife, Duchess Meghan.

He flew in by jet, approaching Aberdeen Airport when Buckingham Palace announced the Queen’s death. The duke took a flight from Luton Airport and only arrived at the estate an hour and a half after the palace released the statement. 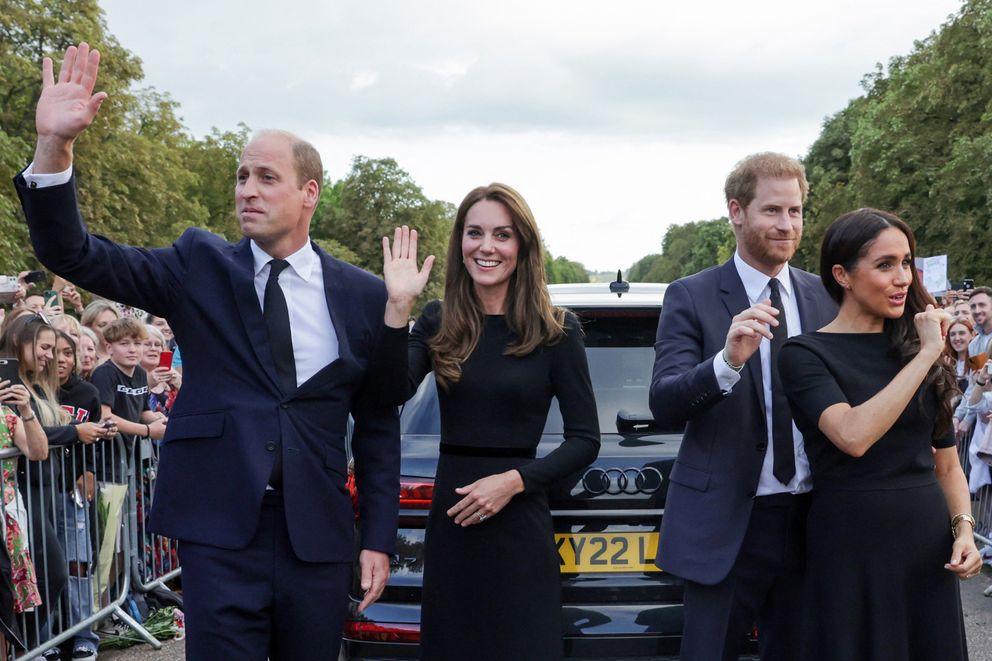 A famous saying that the late Queen had was “often the small steps, not the giant leaps, that bring about the most lasting change,” and the statement came into play after her death. William would’ve made her proud by how he embodied it.

On September 10, 2022, William, his wife, Duchess Kate, and the Sussex couple (known as the “Fab Four”) all came together despite their rift. The surprise reunion was allegedly done to quell the public’s focus on the couples’ feud. 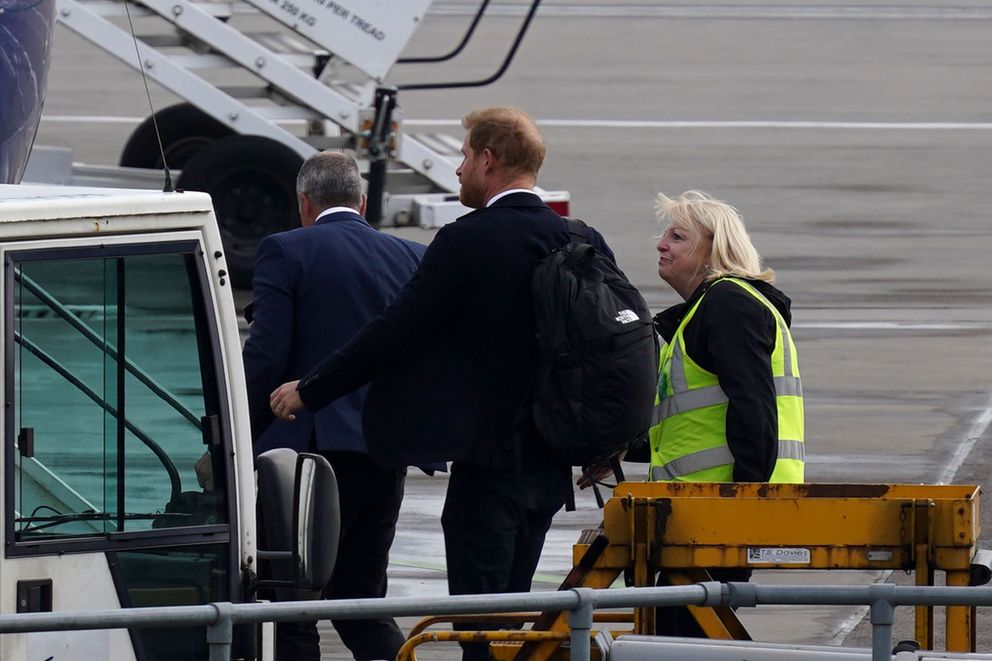 Harry was supposed to have gone to his grandmother’s deathbed with Meghan, but that was changed at the last minute. He traveled alone and left Balmoral after being there for 12 hours.

According to a Telegraph source, William was the one who invited the Sussex couple to join him and his wife at Windsor Castle for the Queen’s flower ceremony. The world was surprised to see the four arriving together in a car that William drove, with an insider stating:

“The Prince of Wales thought it was an important show of unity at an incredibly difficult time for the family.” 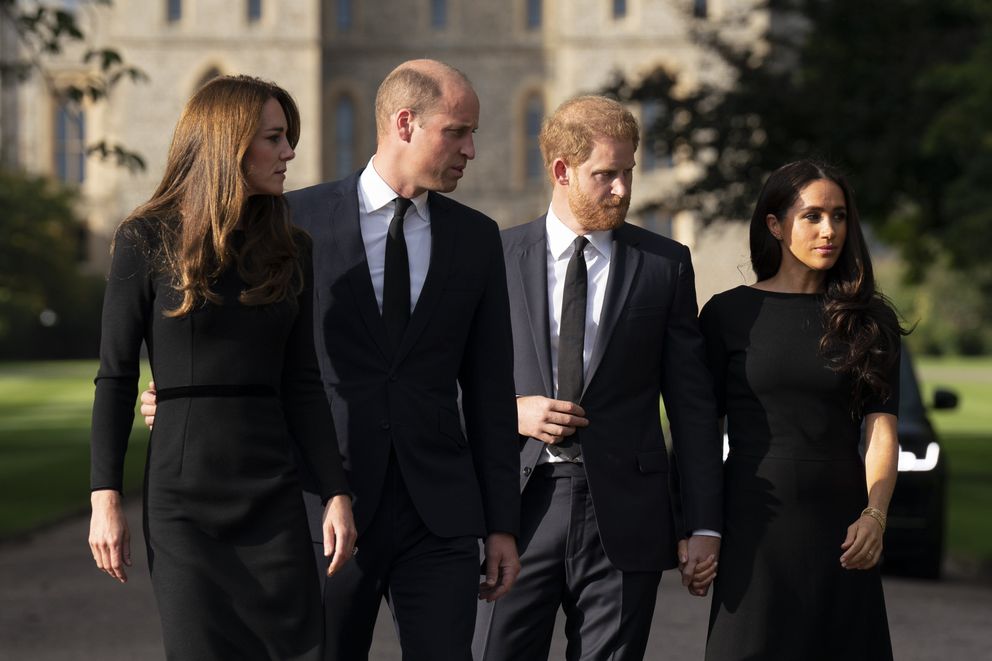 The two couples spent 40 minutes meeting the public after the crowd waited hours to see Kate and her husband. Despite the two pairs arriving and leaving together, they allegedly didn’t speak to each other much.

The Telegraph noted the “stark difference[s]” between the two couples, who looked a “little tense” as they moved around. Meghan and her husband held hands, while Kate and William were more businesslike in their approach. 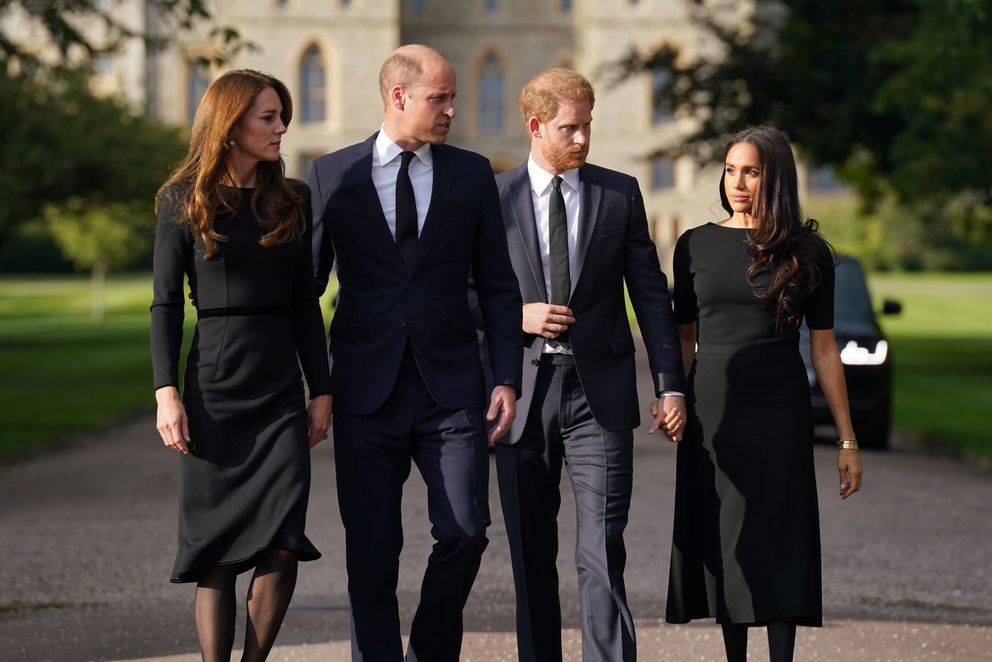 It was hoped that William and Harry’s joint appearance would start helping them heal their rift a bit despite the many challenges they might encounter on the way. However, the publication thought it was too late for the pair to have a complete reconciliation because their reunion came at a cost.

According to Page Six, William and Harry’s father, King Charles III, was the one who told Meghan’s husband that it wouldn’t be “right” or “appropriate” for her to go to Balmoral to see the Queen off. 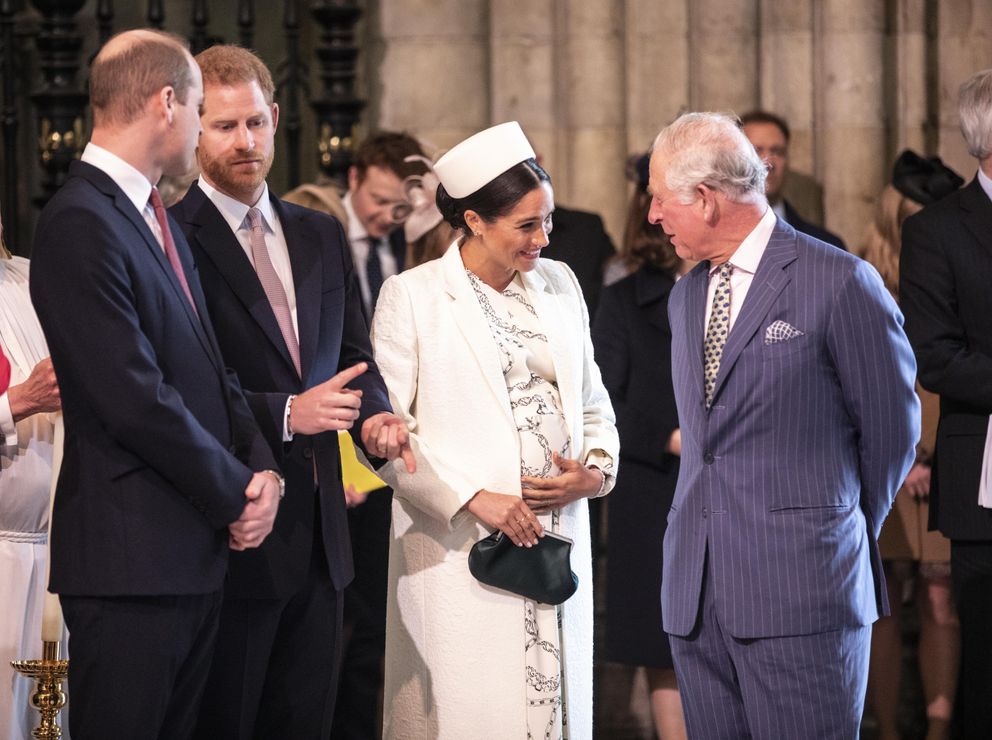 It was reported that His Majesty The King mentioned that Kate wasn’t attending the send-off and suggested they keep the get-together to the closest family members. King Charles allegedly made it clear Harry’s wife wouldn’t be welcome.

By September 10, 2022, William and Harry’s father had been sworn in as the new monarch. His siblings, Andrew, Princess Anne, and Edward, thanked mourners who paid their respects at Balmoral. 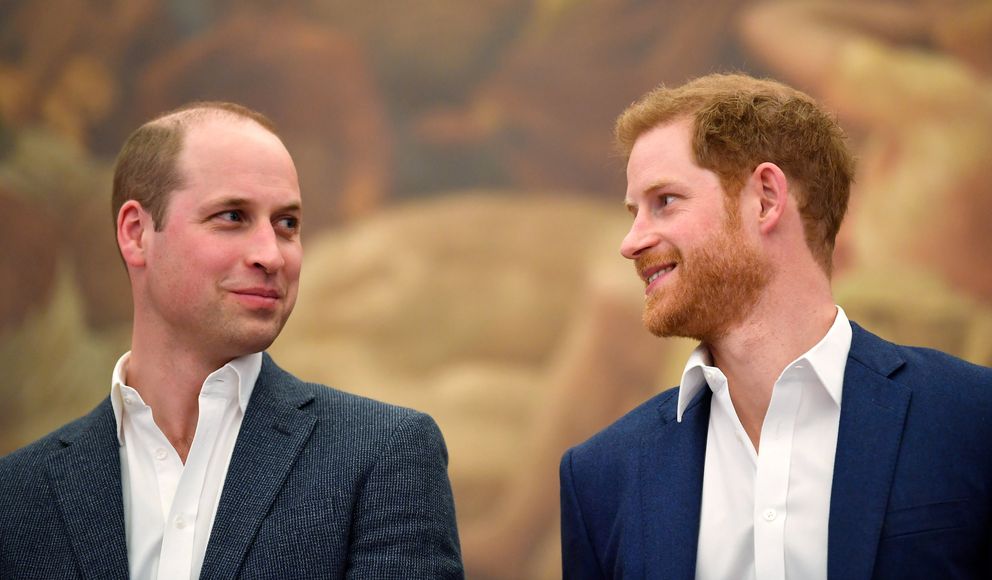 Kate’s husband allegedly put aside his negative feelings against his bother and Meghan and took it upon himself to suggest to Harry that they view flowers in Windsor together with their wives, and Meghan’s husband agreed. A Daily Mail source claimed:

“It happened very quickly – remarkable really considering they didn’t see each other in Scotland.” 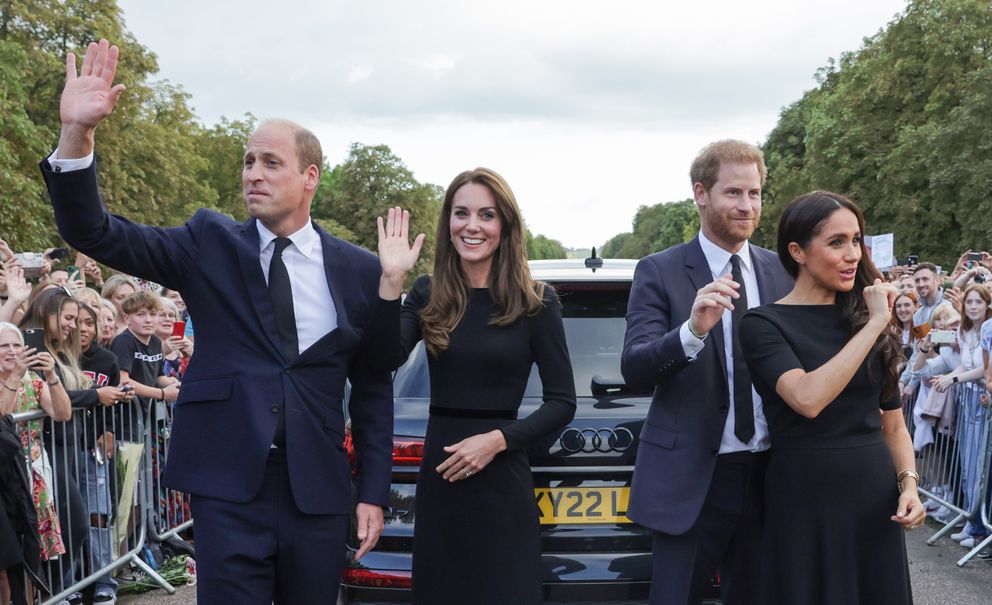 The publication alleged that the gesture from William wasn’t influenced or directed by his father, as other reports stated. A royal source denied these claims and clarified that William didn’t only act after learning Harry was reportedly set to have his walkabout with a television TV crew.

Extensive Negotiations Happened before the “Fab Four” Got Together

Even though the Sussexes and the former Duke and Duchess of Cambridge (now known as the Prince and Princess of Wales) managed to get together for the flower ceremony at Windsor Castle, the feat wasn’t easy. According to The Times, the two couples’ joint arrival was delayed.

[Chris] Ship said he heard it was difficult for [Prince] Harry and his brother [Prince William] to put away their differences so they could step out together in public. 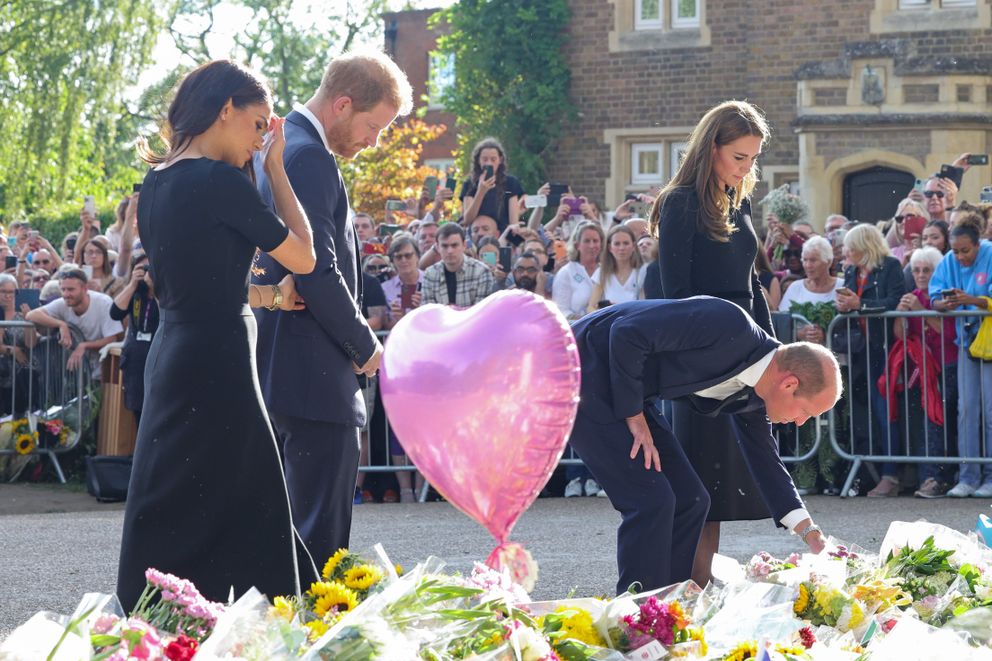 The two pairs allegedly delayed their arrival at the walkabout by nearly 45 minutes because beforehand, they “required extended negotiations.” A bystander at Windsor Castle, Nicola Standen, speculated that the late Queen would’ve been proud that her grandsons came together.

Robert Jobson, a royal author, said he was pleased that William had reached out to Harry, asking that they put on a united front as the family griefed. Jobson described the gesture as:

“A typically magnanimous move by William in memory of our late Queen.”

Prince William, Princess Kate, Prince Harry and Meghan Markle viewed flowers together Saturday. This was the first time the four have been seen together in public since Harry and Meghan stepped down as senior members of the royal family. @scobie tells us how significant this is. pic.twitter.com/zekHHOqthh

A former BBC presenter, Simon McCoy, shared an image of the dukes and their wives and titled the post “Wonderful.” ITV’s royal editor Chris Ship was slightly skeptical, saying the reunion could be “very short-lived.”

Ship said he heard it was difficult for Harry and his brother to put away their differences so they could step out together in public. Omid Scobie, a royal reporter and co-author of “Finding Freedom,” noted how the decision to invite the Sussexes to the walkabout was made “in the eleventh hour.”

Scobie shared how the moment was significant for the history books because of the strained relationship between William and his younger brother. There are probably people who hope the get-together was an opening for many more.