Kids Line Up Onstage And As They Turn Around, Girl In Red Dress Has Audience In Splits

Some people were born to be stars. Their genes have strung within them the uncanny ability to entertain others, and this innate talent can be hard to come by. While most of us might feel stage fright and winnow down even the smallest of entertaining talents just to avoid being embarrassed. Not the born stars though! Every opportunity under the spotlight is taken with zeal and vigor, and it’s really great that they also love the thrill they receive from basking in the limelight.

One little girl from New Jersey has shown early on that she was born to be an entertainer in her life. Lucy Cardillo goes to the Resurrection Catholic School in Cherry Hill, NJ, and she demonstrated her incredible talent at her elementary school during a show for the Christmas choir in 2017. As part of her class recital for the holiday season, the entire group sang the song “Blitzen’s Boogie” together, but Lucy added that extra flair to the performance that has caught the hearts of millions of people.

Lucy’s mom, Kelly Cardillo, luckily recorded the whole performance for netizens to watch, and before she knew it, Lucy had taken the internet by storm! After she uploaded her video to Facebook, her original post garnered over 20 million views and hundreds of thousands of reactions and shares. Though the original video is now no longer available, copies of the performance are still available on other streaming sites, and Lucy’s excellent theatrics continue to rake in fans. We are sure that this video will make your day too! 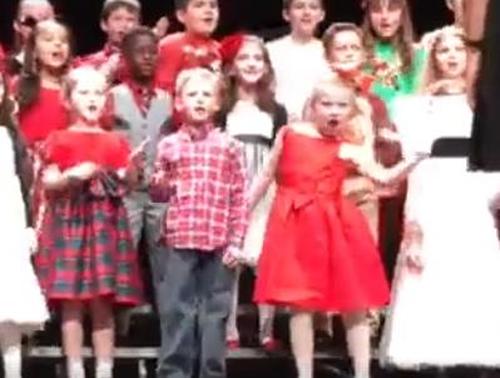 We can all be thankful that Kelly Castillo had her camera on hand and decided to share with the world the great performance by her daughter. Castillo was both shocked and proud as her daughter set the stage ablaze with her dance routine. Castillo’s little girl has a big personality and was clearly excited by the Christmas season. The video begins with the group of kids, presumably Lucy’s classmates, who are turned away from the audience. The upbeat music to “Blitzen’s Boogie” starts up, and just before the singing begins, the group of students turns around to face the audience. Lucy, however, jumps 180 degrees and lands on her feet, ready to take on the song with a whole new energy.

According to ‘The Philadephia Inquirer,’ the original video had the caption, “This is my Daughter at her school Christmas concert. She brought the house down. See if you can guess which one she is,” written by Castillo. It isn’t hard to spot the star! Dressed in a bright red dress and white tights, Lucy also dons her hair with a “JoJo Siwa” bow. Her over-the-top moves are a stark contrast to her classmates’ mores subdued, practiced moves. Her arms take a life of their own as they move to the tune of the reindeers’ boogie, and her face is adorably full of confidence and determination as she sings along. “Blitzen’s Boogie” is a favorite among elementary school teachers who want to put on a holiday show due to its upbeat tempo and a swinging beat. 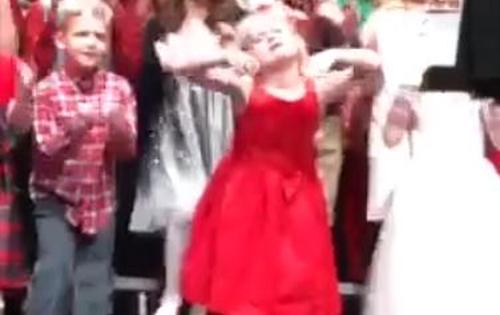 The song is about all of Santa’s special reindeer, and it is a special ode to Blitzen, which makes it a very special song. Generally, the reindeer that is the most well-known is Rudolph, thanks to the catchy song about his red nose that dominates Christmastime radio. We believe that Blitzen’s catchy boogie could definitely give Rudolph’s song some valid competition. As the song continues, Lucy’s adorably funny movements take on new dramatics as the song goes on, and everybody in the audience loves it! We hear cheers and supportive whoops from everyone. If the recorded video is so much fun to watch, we can only imagine how much everyone loved watching this performance live!

It seems as though performance and entertainment genes run in the family! Lucy’s older brother, who was 10 years old at the time, did theater. Her mother, Kelly is a dance major and her father is a classical musician who graduated from the University of the Arts. With a family like this, it’s no wonder that Lucy is such a star! ‘The Philadelphia Inquirer’ reported that this performance almost didn’t happen as Lucy did not want to miss a holiday party that was organized by her jazz ensemble which was at the same time, but thankfully she was able to attend both events. Castillo said that she was pleasantly surprised that the school reacted so positively to Lucy’s performance. Her previous school had asked Lucy to tone down her performance enthusiasm according to her mother. We are glad that she is now somewhere her talents are appreciated! 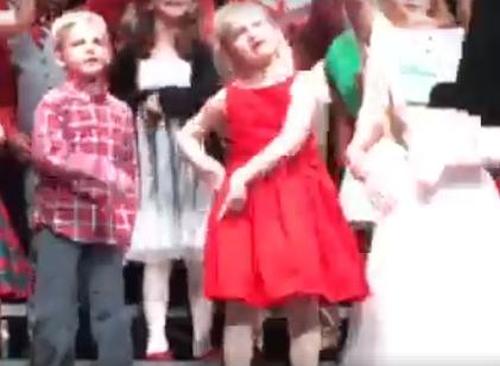 Speaking of her daughter’s performance, Cardillo said, “She’s a natural performer. She’s very comfortable being on stage.” Her mother also said, “That’s her personality. But she doesn’t always perform like that. I think she just really felt that song.” The news outlet also reports that Lucy’s idol is JoJo Siwa, who’s bow could be seen in Lucy’s hair during the performance. In an exciting turn of events, Lucy and her family were actually invited by Siwa to meet her in Hollywood! Inside Edition reports that Lucy’s adorable performance had caught the eye of the “Dance Moms” starlet, who wanted to make sure that she helps Lucy’s dreams come true!

Lucy was flown down sometime at the end of 2017, where she met Siwa and wore matching outfits with her. The family also visited the Hollywood Walk of Fame at the time. Though she has a big personality on stage, Castillo told Inside Edition that Lucy is actually quite a shy girl. About her famous recital performance, Lucy said, “I like being on stage,” and added, “I was having so much fun.” It is always wonderful when performances like this help both the performers and the viewers. While Lucy had a great time dancing, she was also able to brighten so many people’s days through this video. Lucy also said that when she grows up, she wants to be a dancer just like Siwa. With such incredible talent at such a young age, we are sure that the sky is the limit for Lucy. As she continues with her bright future, we wish Lucy the very best for everything up ahead!

What did you think about the inspired performance given by Kelly Castillo’s daughter at the Christmas program? Did you find yourself laughing and dancing along with the young girl? Send the video of the young girl’s performance to everyone on your friend’s list. You will surely add some enjoyment to their day.