As the highest awarded country music singer, a devoted wife, and mother to six children, one would be forgiven for thinking that Loretta Lynn had it all. Sadly, word broke yesterday that she had passed away, aged 90.

Over the course of her life, she was nominated 18 times for a Grammy and won three. She was also married to the same man for 48 years, but revealed in her biography and in interviews that it was “one of the hardest love stories.”

Loretta met talent manager Oliver Vanetta Lynn Jr., commonly known as Doolittle Lynn, when she was a teenager. A month later, she married him in 1948 when he was 22 and she was just 16 years old.

Loretta was utterly devoted to this man despite his constant cheating, something not all women would forgive.

The country music legend gifted fans with her talent for over 60 years and continued producing music right to the very end – only three years ago, she released her 50th studio album “Still Woman Enough.” Fans were left heartbroken when she was forced to cancel her tour in 2017 due to health issues, yet she still bounced back, a testimony to her determination to succeed.

Indeed, Loretta seemingly put the same drive and determination into her marriage, despite being wed to a man who constantly cheated on her. In her 2002 autobiography Still Woman Enough, she revealed that ‘Doo’ had frequently cheated on her and once left her while she was giving birth.

The two had met at an auction over pie and Doo was immediately drawn to the beautiful brunette so they didn’t waste much time tying the knot, but even after they were newlyweds he sent her back to her parents’ house so he could woo other women.

His drinking was a problem in their relationship, and was said to lead to physical fights between the two.

“Every time Doo smacked me, he got smacked twice,” Loretta said. During one fight, she emptied a skillet of creamed corn over her husband’s head. Another time she struck him: “I heard teeth hittin’ the floor and thought, ‘Ooh, I’m dead. He not gonna put up with this.’ But he laughed.”

When asked why she didn’t leave him, Loretta always maintained her love for him, and that she had six children to consider.

“I put up with it because of six kids,” she once explained. 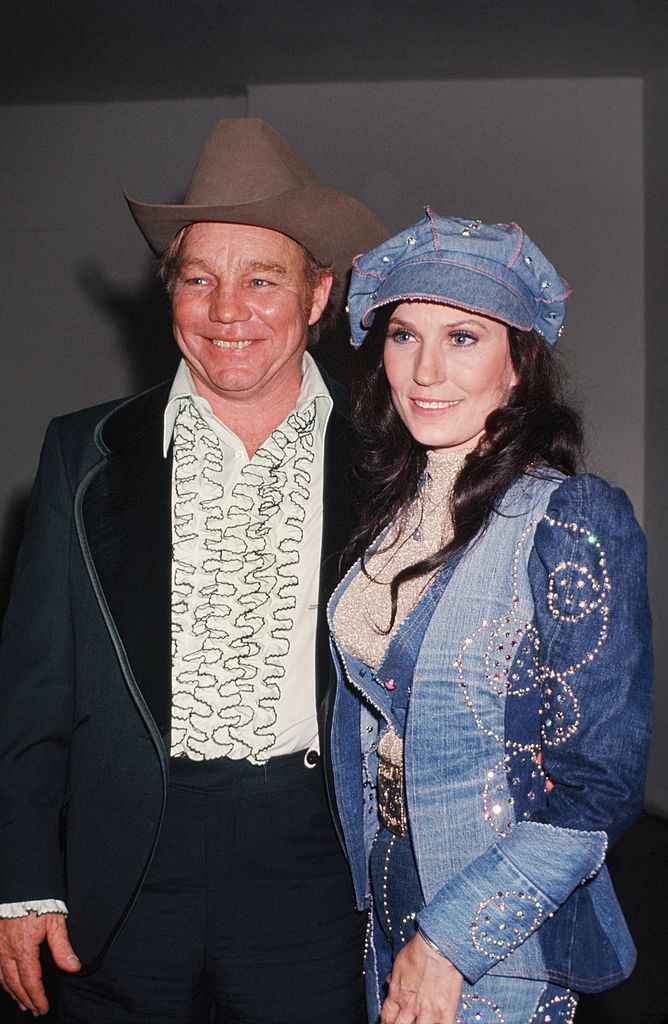 She also credited her husband with her career as he believed in her, even buying Loretta her first guitar, a $17 purchase from Sears.

In one of her autobiographies, she recalled:

”I married Doo when I wasn’t but a child, and he was my life from that day on. But as important as my youth and upbringing was, there’s something else that made me stick to Doo. He thought I was something special, more special than anyone else in the world, and never let me forget it. That belief would be hard to shove out the door. Doo was my security, my safety net,” she said.

“And just remember, I’m explainin’, not excusin’… Doo was a good man and a hard worker. But he was an alcoholic, and it affected our marriage all the way through.”

But Loretta said without Doo she would never have even sung in front of anybody as she was so shy.

Born in the coal-mining hills of Kentucky as the eldest daughter of eight children the singer was raised in abject poverty, with her mother having to use newspaper as wallpaper to keep the cold out of their tiny cabin.

She met her husband and thought she had found her happy ever after. Tragically, he would never settle for the beautiful and talented woman he’d married: he always wanted more.

She dealt with heartbreak after heartbreak, violence, and rejection but she never gave up and even channeled her feelings into her music, stating she never wrote a song without including her husband with her lyrics, charting his affairs and even the time she attacked another woman who was interfering in their marriage.

According to her: “If you can’t fight for your man, he’s not worth having.”

Not only did Loretta have to deal with her philandering husband, but also suffered the heartache of two miscarriages. She was a mom to four children by the time she was 25 and in 1963, when she thought she was done with childbearing, she fell pregnant with twin girls.

Loretta stayed in her marriage until Doolittle died in 1996 at the age of 69. The loss was hard to bear, and her kids thought she would never recover from it.

“Three days after my husband died, I left Hurricane Mills and come to Nashville,” she said in an interview in 2000. “After bein’ here awhile, I said to a friend of mine, ‘It seems like I been here a couple months already.’ And she said, ‘You been here a year.’”

Thankfully, she has been able to pick up the pieces and is now focused on caring for and supporting her family, including her six children and three grandchildren, while still making music.

We’re sure gonna miss Loretta Lynn and her music. What a legendary musician and iconic country figure.

Rest in peace, Loretta, and thanks for the memories!

It’s hard to imagine staying with a husband like Loretta’s but her devotion to this one man is admirable. Please share this woman’s incredible story with all the country fans you know.