It’s every person’s dream to go to prom with their crush or someone intimately close to them. After all, prom is one of the most important highlights of a student’s high school life. Of course, you can take whomever you want to, like your best friend, although it’s unusual to take a family member to prom. But for a junior student from Virginia, he did just that and took his grandma to what could be one of the most touching prom moments ever.

In 2017, a student from Stafford High School in Fredericksburg, Virginia named Stephen Vigil was about to mark a milestone in his high school life when he found about a piece of devasting news: his 91-year-old grandmother Julia Vigil had been diagnosed with pancreatic cancer.

Since his grandmother was only given six months to live, he made the most out of the time he had left with her by taking her to prom.

“She doesn’t have much time left, so I didn’t even have to think about the decision to take her to prom. I’m so glad we’ll both have these memories,” he told The Free Lance-Star.

Jarman wasn’t just a grandmother to Virgil – she stood as his best friend. So, it made sense that he chose her to be his date.

“Ever since I was a baby, we’ve been like best friends,” Virgil told InsideEdition.

Apart from the fact that he wanted it to be one of the most memorable moments in his life, Virgil found out that his grandmother didn’t go to her own prom. 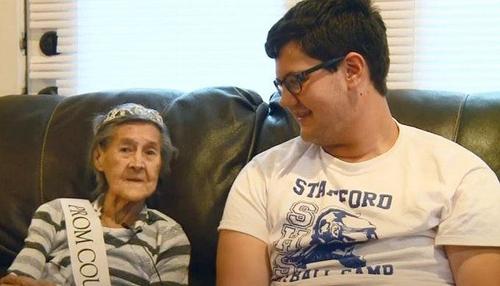 Of course, Jarman got surprised when Virgil asked her to be his date.

So, Virgil and his mom sought permission from the school principal to allow him to take his grandma with him to prom. “I had never been to prom in my life,” Jarman told WUSA9.

“I wanted to bring my grandmother to prom because I wanted to do something special for her,” Virgil told HuffPost.

Apparently, the school doesn’t usually let anyone above 21 years old in. But it was a different case for Virgil and Jarman.

“This was a bit different. I think it was important for Stephen and I really wanted to make it happen for both of them,” the school principal, Joseph Lewis, said.

When Virgil and Jarman entered the venue, the latter received a tiara and a sash especially made for her.

But what made the prom even more special was it was also the eve of Virgil’s 92nd birthday.

Jarman also proved she’s the sweetest grandmother as she picked a blue dress to match her grandson’s vest and bow tie.

Virgil also asked the DJ to play one of Jarman’s favorite songs: Elvis Presley’s classic hit ‘Can’t Help Falling In Love.’ And yes, they danced to it.

“She almost had me crying as she was singing it along with me while we was dancing,” he said.

Indeed, it was a memorable night not just for Jarman, but also for Virgil.

“I won’t forget that night with my grandmother,” Virgil said.

Weeks before prom, Virgil and Jarman went on a week-long trip to Florida courtesy of Dream Foundation, an organization that grants the wishes of the terminally ill.

Sadly, Jarman passed away less than three months after they attended prom together – but she died knowing her grandson did something magical for her.

Were you also moved by what Stephen Jarman did for his grandmother? Let us know your thoughts and pass this on to your family and friends who might love to read this story!