When you’re looking for a house, there are many things to consider, such as how much room you need for your family and the quality of nearby schools. For some people in Texas, having a pool is a must. Most people also prefer updated kitchens and bathrooms. The first thing one notices, however, is the exterior and the paint color of the house. Another factor that some people might consider is whether or not the neighborhood has a homeowner association, abbreviated as HOA. This can be a positive thing because the homes and properties in the neighborhood are kept in better condition. It even sometimes pays for features like playgrounds, pools and tennis courts.

On the other hand, some people like to have more free reign to do whatever they want on their property, so for those people, an HOA can be viewed as a negative when looking to buy a house. For a resident of Pflugerville, Texas, an HOA was something he tried to avoid. Emilio Rodriguez intentionally bought a house that did not have an HOA because, apparently, he has eccentric aesthetic tastes.

Texas resident Emilio Rodriguez decided to paint his entire house Pepto-Bismol-pink back in the spring of 2019 and received backlash from his neighbors for his eccentric choice. The iconic color is anything other than subtle, and despite much of the criticism he has received, he is happy to have his house stand out in Austin, Texas. Because Rodriguez’s neighborhood is one without a home owner’s association, there is little nothing that anyone can do to stop him from keeping his house painted so brightly.

Read on to learn more about Rodriguez’s pink house and how his neighbors are saying it doesn’t fit in with the other houses in the neighborhood. 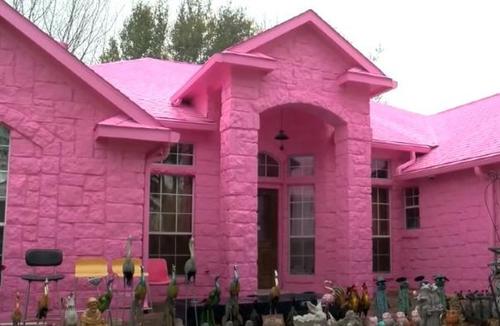 When Rodriguez moved into his house, it sported a beige exterior that made it similar to the other homes in the neighborhood. However, now the house is much more unusual. It’s not a light, creamy shade that you might expect. It’s a very loud and intense Pesto-Bismol pink that you might expect on an elementary school girl’s lunch pail.

Rodriguez stated that his favorite color is pink, so he specifically looked for a house in a neighborhood without an HOA so that he could paint it that way. At first, he only painted the back of the house, but he later did the same in the front of the house. Even the roof and the rain gutters have been painted in this obnoxious Pepto-Bismol color.

“I love this house. I don’t know why people don’t like it,” Rodriguez told KEYE.

When asked about the reaction of the neighbors to this nausea-inducing color, Rodriguez didn’t seem to comprehend why anyone would object to it. He explained that it is part of a cultural movement to “Keep Austin Weird.” Despite the neighbor’s finding the color disturbing, Rodriguez told KEYE the color actually has a soothing effect for him, going back to when he needed to have lots of surgeries as a teenager:

“When I have to do medical stuff I can look up at the pink house and it kind of calms me down a little bit.”

With this in mind, Rodriguez plans to paint even more areas of the property pink. He told KEYE:

“The driveways’ going to be pink I’m getting all the grass removed for pink tile blocks I’m going to have pink spot lights on the trees pink car. I will paint my wheel chair pink.” 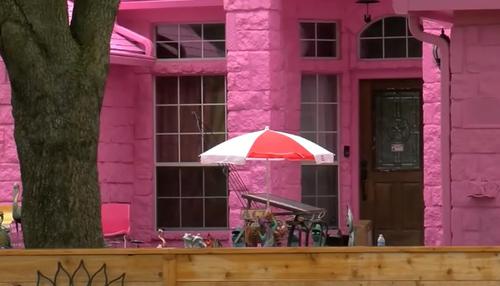 The house certainly stands out among the rest for its unusual color. However, even when people insulted Rodriguez’s choice, he found a way to put a new spin on it. Speaking with FOX 7 Austin, he said, “People say it looks like Pepto-Bismol but I’m going for pink slime.”

It’s also a color that doesn’t seem to be going away any time soon. “Even if they made an HOA right there I’m already grandfathered in so we’re set,” he explained. “I did my homework beforehand.”

Many neighbors have gone to visit the home just to see it in person as it’s quite the unusual color for your standard neighborhood house. While some people have found it intriguing, others have found it incredibly distracting.

Neighbor Anita Garcia said, “‘Beetlejuice’ movie or maybe ‘Edward Scissorhands’ – just really different.” She added, “To each his own… but yeah I wanted to see it for myself. It was real.” Garcia explained how she even drove her grandchildren to the home so they could all sneak a peek at the Pepto-Bismol looking exterior.

Neighbor Emanual Alvarado has also stopped by to see the pink house in person. “This is definitely adding a twist to the neighborhood,” he simply stated. He also added some supportive words urging others to try to change their negative perspective.

“I would suggest to neighbors to be open minded because, you know, I think (you) should invest energy into being different and being yourself and not let being yourself be suppressed about what society thinks is normal,” Alvarado said.

Isn’t this an unusual house color? What is the craziest house color you have ever seen? Do you think you would object to a neighbor making radical aesthetic changes to the exterior of their home? Let us know your thoughts! If you were amused by this story, be sure to pass it along to your friends and loved ones!