Mark Wahlberg Called Beloved Mom Every Day until She Died – She Raised Him, Donnie & Siblings in Poverty

Mark Wahlberg was not born with a silver spoon and lived a life of crime in his early years. However, he grew up recognizing the importance of family. The actor never stopped loving his mother and chatted with her until she died.

It has been over two decades, and the Wahlberg family still holds the position as one of the successful dynasties in Hollywood.

Alma and Donald Wahlberg did not have much money, but they had a large family, including their nine children, whom they raised in Dorchester, Boston.

Many years later, her sons emerged as a force to reckon with in the entertainment industry, bringing glory to their family name and themselves.

Mark Wahlberg, named the highest paid actor in 2017, is an award-winning star with many Oscar nominations and other trophies, including a BAFTA and Boston Film Critics Awards.

Incredibly, his acting credits stretch across different genres. His notable works include “The Departed”, “Planet of the Apes”, and the nice action transformers remakes.

Apart from being able to play any role, he is a versatile entertainer. Mark was formerly a rapper famously called “Marky Mark.” His bandmates were known as the “Funky Bunch.”

Additionally, the TV icon has some producing chops. He worked as the executive producer on the “Boardwalk Empire” crime drama and the HBO series “Entourage.”

The movie star shares some of his reality via a TV show with his fans. Mark, a restaurateur who co-owns the Wahlburgers chain, has appeared in the TV series about the business.

Interestingly, Alma’s other son, Donnie, is equally successful as the prominent actor. Donnie shuffles between working behind the scenes and in front of the camera.

While he is an actor known for “The Sixth Sens”, ” Zoo Keeper”, and “Ransom”, he is also a singer and songwriter. Similarly, his career includes record and film production.

Paul, another clan member, is an actor, professional chef, and reality TV star. He has worked in high-class restaurants and co-runs the family’s restaurant business with his other brothers, Mark and Donnie.

Arthur, Alma’s eldest son, also dabbled into acting and has earned roles in a few films. He is also a comedian, reality TV star, and entrepreneur.

Mark’s other brothers, Jim and Robert, also have flourishing careers. Robert is an actor, while the former sits on the board of the Mark Wahlberg Youth Foundation, which was founded to help youths in inner cities.

Mark grew up in a large family made up of step-siblings from different men. At a younger age, he believed he was the youngest of nine children between Alma, his mom, and Donald, his dad.

As he grew older, Mark realized that there was a better path. He pledged to go back to high school to motivate his kids. Thankfully, in 2020, he bagged a high school diploma.

However, he soon realized that he was the sixth child of his parents. Three of his other siblings were born out of wedlock long before Alma married his dad.

Mark was convinced that his family was larger than he was made to believe, and he did not meet his siblings all at once. He said:

“There are a couple of kids floating around that I just met at Christmas. I was like, ‘Jesus, how many kids do you have?’ Now there are 12 in all, but there are probably a couple more; my dad was in the army and spent a lot of time overseas. There’s a lotta people in my family.”

Apart from growing up in a large home, the Wahlbergs were raised in poverty. Mark had to share a room with his five brothers. Eventually, he realized a way to get over everyone, including his family.

At an early age, Mark witnessed one of his brother’s detention in a youth facility. He sent home some Nike and Converse factory rejects during his time there.

Although some sizes were too big, the actor admitted that “we were actually happy my brother was locked up, because we would get free sneakers.” 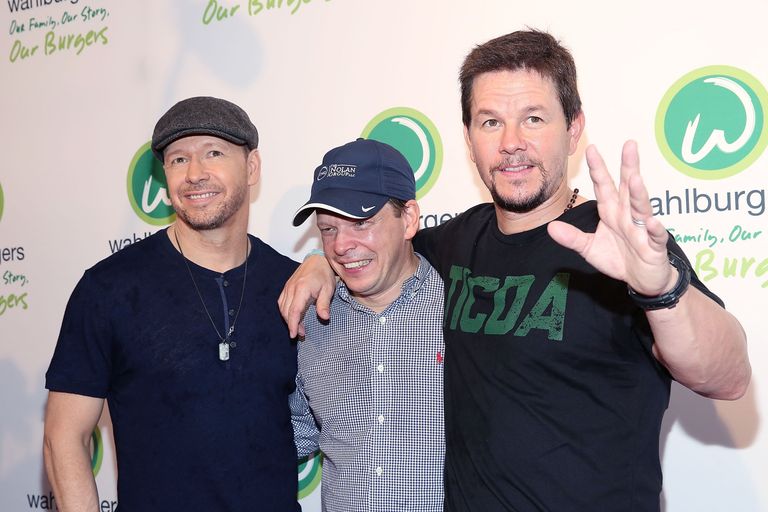 Even though their parents did not have much, the couple worked hard to provide for the family. Sadly, when Mark was ten years old, his parents divorced.

The “The Departed” star stated that he loved his parents similarly. He was not loyal to only one camp — yet it did not stop him from falling apart and heading toward a destructive path.

Alma acknowledged that the divorce was painful for her, and she was preoccupied with her pain. This impacted her parenting; she found it challenging to control her kids from an eccentric lifestyle.

Soon, a 13-year-old Mark gave in to peer pressure. He tried drugs and was hooked on substances for some time. While recalling his childhood story, the actor shared:

“By the time I was 13 or 14, I stopped going to school. My older brothers taught me how to get high when I was ten and gave me a couple of beers. Being the youngest, the smallest, and the most eager, I always tried to impress the older guys.”

As he grew older, Mark realized that there was a better path. He pledged to go back to high school to motivate his kids. Thankfully, in 2020, he bagged a high school diploma.

The “Ted” star was determined. He hired a tutor and studied while working on “Two Guns”, yet he kept it a secret. “Nobody knew because I felt like I don’t like to count my chickens before they hatch, so I didn’t want to say that I was doing it until I finished it,” he said.

In the end, Mark emerged victorious, describing it as “a huge achievement”. Following his high school degree, he proposed that he would love to attend USC to study film.

Even though there were some highs and lows while growing up, Mark and his siblings never strayed from their roots. They loved their mother till the end.

In 2018, the then 76-year-old matriarch explained to Sheinelle Jones, host of Today’s exclusive series “Through Mom’s Eyes”, that she taught her kids to be responsible and always check up on her. In her words:

Consequently, the Wahlberg clan learned more than responsibilities. They struggled to carve a niche for themselves in their careers.

Despite their various degrees of accomplishment, they remained close and respected their mother, who also featured in a few of her sons’ TV series.

Mark Remained Close to Alma until Her Demise

During the same interview with Jones, Alma praised Mark for fulfilling his duties as a good son. She claimed he would often call her whether he was far or near. According to her:

“Mark calls me from all over the world. Every single day for the past two and a half years. I don’t care if it’s 3 o’clock in the morning!”

Their relationship was unshakeable until she died in 2021. The previous year, Donnie had shared an Instagram post signifying that his mom was struggling with some mental health issues.

The singer wrote that his mother had trouble remembering much during his visit and acted confused, but somehow, she maintained her personality.

Alma’s battle with dementia lasted until her demise. However, her children had nothing but sweet and remarkable words to chime about their mother.

Mark shared a smiling photo of his mom in a pink coat and wrote, “My angel, Rest in peace.” His older brother, Donnie, scribbled a lengthy writeup where he honored the deceased with loving words while maintaining that she shaped his life.

In an interview, Mark revealed that his mother’s death was heartbreaking as he would not chat with her daily. But he added that his sister is now on speed dial.

The actor revealed that she became an “enormous support system for our entire family. She was also my mom’s primary caregiver. So it hit her the most”.

Mark, a father of four, is taking a cue from his mother’s parenting. The actor never fails to bond with his kids and ensures to be present for them, no matter how busy he gets.