It began as a satire, morphed into comedic drama, made Emmy history through 11 seasons, and ended with a final episode watched by TV’s biggest audience for a scripted series.

Fifty years after its debut, “M*A*S*H” is still saluted as one of television’s finest (half)-hours.

Adapted from director Robert Altman’s Oscar-nominated 1970 film, “M*A*S*H” premiered on Sept. 17, 1972. It told of the boisterous and messy life at a South Korean-set Mobile Army Surgical Hospital (explaining the title acronym) during the Korean War of the early 1950s.

The ensemble cast – Alan Alda, Wayne Rogers, McLean Stevenson, Loretta Swit, Larry Linville and Gary Burghoff – was mostly unfamiliar to TV viewers. Among them, only Stevenson had a small-screen profile, thanks to a two-year supporting role on “The Doris Day Show.” (As naïve-but-efficient Corporal Walter ‘Radar’ O’Reilly, Burghoff was the lone principal cast member from the film to transition to the series.)

Happy birthday to us:USA TODAY turns 40: Celebrating 40 moments that mattered most to our newspaper 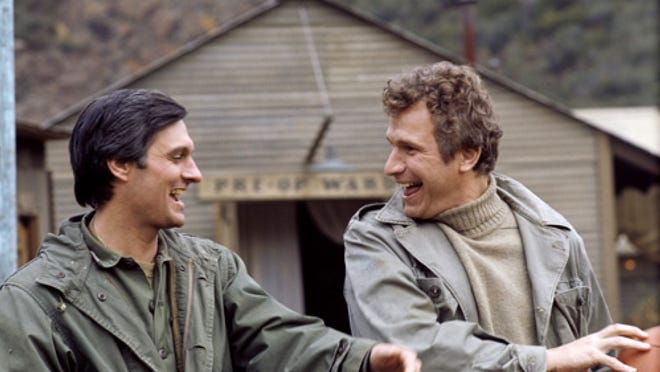 In a 1998 interview with the Television Academy Archive, writer and co-creator Larry Gelbart, who was tasked by producer Gene Reynolds with adapting the film, said he told Reynolds that he’d take on the assignment “only if what we did could be true to the spirit of the motion picture.” In a phrase: anarchy in a war zone.

But Gelbart, a respected veteran writer of both live 1950s TV (“Caesar’s Hour”) and of 1960s Broadway (“A Funny Thing Happened on the Way to the Forum”), said that because the country was still fighting in Vietnam in 1972, “there was no intention to trivialize that effort by simply doing another gang comedy set in an Army background.” So “M*A*S*H” would have to walk a fine line. Reynolds and CBS agreed. A pilot and series pickup followed.

Early ratings for the show, scheduled on Sunday nights opposite NBC warhorse “Wonderful World of Disney” and ABC’s long-running “The FBI,” were disappointing to dismal. Not helping: CBS’s decision to position the show between another film-to-series adaptation – the poorly received and short-lived “Anna and the King,” based on “The King and I” and starring that film’s Yul Brynner – and “The Sandy Duncan Show.” (Trivia alert: “Anna and the King” was also produced by Gene Reynolds.) “M*A*S*H” was little noticed.

But it was more than a bad time slot that “M*A*S*H” was battling. Viewer expectations and TV conventions were also at issue: In honoring the spirit of the Altman film, the series version zigged where other more conventional sitcoms zagged, teetering between high jinks and pathos. Case in point: “Sometimes You Hear the Bullet,” its 17th episode, broadcast in January 1973, in which lead surgeon Hawkeye Pierce dealt with the death of a patient who was also a childhood friend. It featured what became known by fans as the “Two Rules speech,” given by M*A*S*H leader Henry Blake (Stevenson) in an attempt to console a tearful Pierce. (“All I know is what they taught me at Command School. There are certain rules about a war. And rule number one is, young men die. And rule number two is, doctors can’t change rule number one.”)

“M*A*S*H” finished its first season in 46th place, out of 75 network TV series. But it also was showered with nine Emmy nominations. Eking out a renewal, it was rewarded with a better time slot for its sophomore season, paired on Saturday nights with “All in the Family,” then TV’s highest-rated show, where “M*A*S*H” became the smash it would remain for another decade. At the 1974 Emmy Awards, it was named Best Comedy, with Alda winning as Best Comedy Actor.

“M*A*S*H” continued to rewrite the rules of TV comedy in success, changing both how it could be written and shot, through the eyes of a patient, with on-camera interviews about life in a war zone or shown in real time, complete with an on-screen ticking clock or with a dramatization of nightmares. It also weathered multiple cast changes: Stevenson, Rogers, Linville and Burghoff left during the series’ middle years, with Harry Morgan, Mike Farrell, and David Ogden Stiers added to the cast. Lower-profile roles played by Jamie Farr (Corporal Klinger) and William Christopher (Father Mulcahy) were later expanded, too.

It was Stevenson’s departure after the third season that saw “M*A*S*H” in ultimate defiance of sitcom convention: “Abyssinia Henry” killed off Blake just as the bumbling commanding officer was heading home to the States.

Devotees tend to draw a line between two distinct eras for the long-running series (which lasted nearly four times longer than the Korean War itself): Seasons 1 through 5, when it was chiefly a military satire shaped by Gelbart (who left in 1976) and run by Reynolds (who left in 1977); and Seasons 6 through 11, influenced if not overseen by lead actor Alda, who’d become the face of “M*A*S*H” as well as its frequent writer and director. Under Alda, the series drifted into broader social commentary about the human condition (PTSD, sexism, racism) and the general fog of war.

(Alda made Emmy history with wins in three separate categories throughout its run : acting, writing, and directing.)

By Season 10, Alda, coming off a successful movie directorial debut (“The Four Seasons”), was ready to leave the show. But CBS squeezed out a shortened 11th season, to be tied up with a war-ending 2½-hour finale that Alda directed. Following months of publicity and drum-beating, “Goodbye, Farewell, and Amen” aired on Feb. 28, 1983. Nearly half the country – 105 million people — tuned in to see their longtime favorites finally go their own separate ways.

When “M*A*S*H” premiered in 1972, it was the latest in a line of CBS comedy fare aimed at better reflecting a changing country, ushered in by the success of “All in the Family” a year earlier. Gone were longtime older-skewing rural-sitcom mainstays (“Petticoat Junction,” “The Beverly Hillbillies”). That September brought big-city character comedies that provoked (“Maude”) or showcased more sophisticated storytelling (“The Bob Newhart Show”). By the time “M*A*S*H” ended, in a three-network TV universe, the kind of dramatic comedy that “M*A*S*H” helped introduce had become a prime-time staple. By the end of the decade, there’d even been an official term introduced – the “dramedy” – to describe the hybrid.

Of the eleven principals seen over the course of the show’s 251 episodes, only five – Alda, Swit, Burghoff, Farrell and Farr – survive.

And “M*A*S*H”’s record as the TV show with the most-watched series finale stands.

There are thousands of TV shows available on streaming services for audiences to enjoy at their leisure in 2022, but some notable titles are absent from the likes of Netflix, Amazon, Hulu, HBO Max and other streamers. These 20 TV series, from mid-century classics to more recent beloved programs, aren’t available to stream with a subscription to a paid service, or even on free ad-supported streamers. If you want to revisit them, you’ll have to buy them digitally or on DVD (where available).

“Get Smart” (NBC,1965–69; CBS, 1969–70): Created by Mel Brooks and Buck Henry, this parody of spy movies was a riotous hit starring Don Adams. “Smart” is only available to buy digitally, not on any paid or free subscription services. 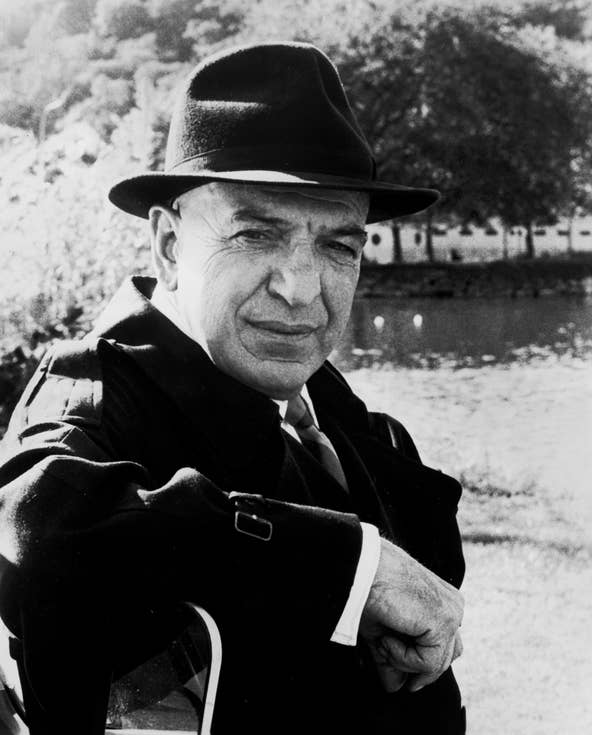 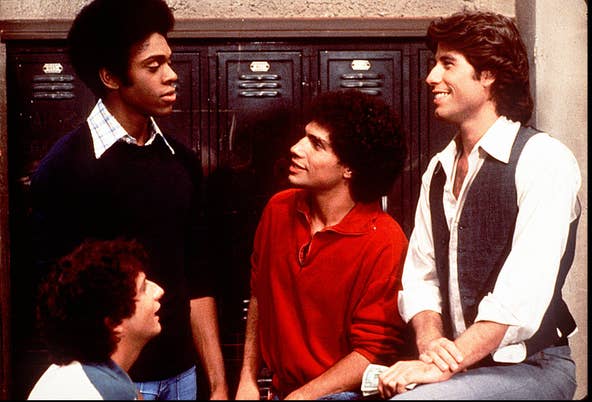 “Welcome Back, Kotter” (ABC, 1975-79): John Travolta starred alongside Ron Palillo, Lawrence-Hilton Jacobs and Robert Hegyes in this sitcom about a remedial high school class. “Kotter” is only available to buy digitally, not on any paid or free subscription services.
ABC 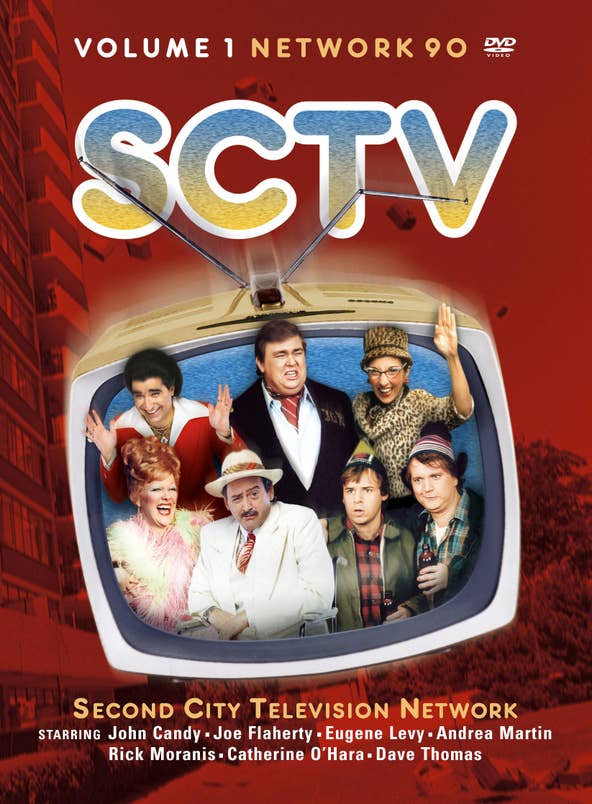 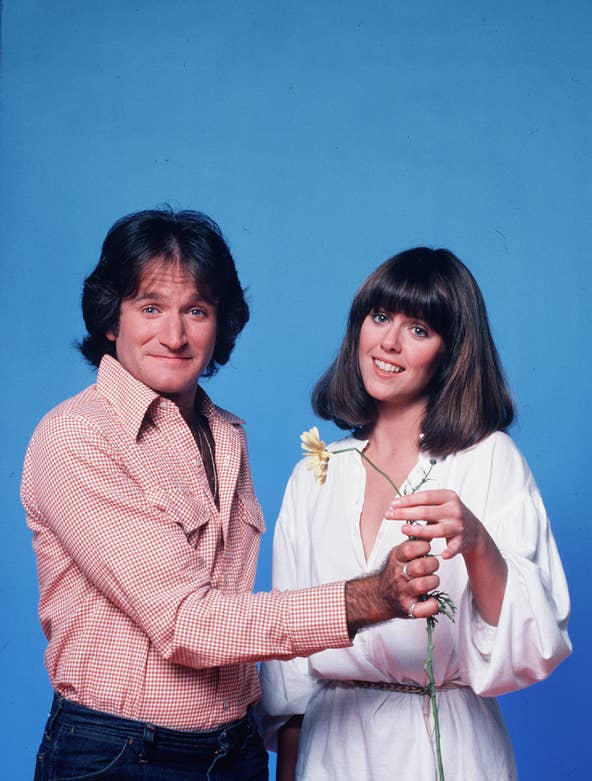 “Mork and Mindy” (ABC, 1978-82): Robin Williams and Pam Dawber starred in this “Happy Days” spinoff in which Williams played an alien from the planet Ork. “Mork” is not available on paid or free subscription services or to purchase digitally.
GPN 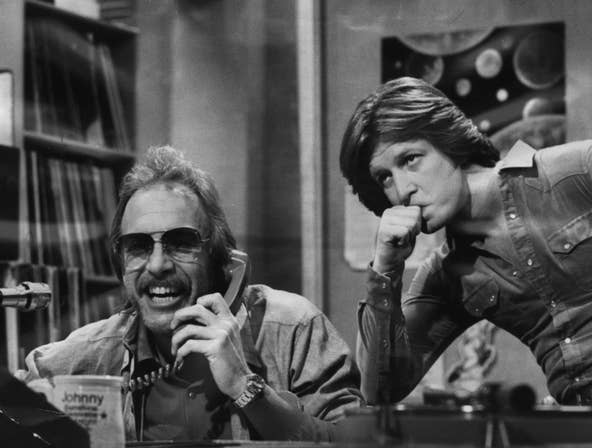 “WKRP in Cincinnati” (CBS, 1978-82): The sitcom followed the staff of a struggling Ohio radio station, starring Howard Hesseman and Gary Sandy. “WKRP” is only available to buy digitally, not on any paid or free subscription services.
CBS 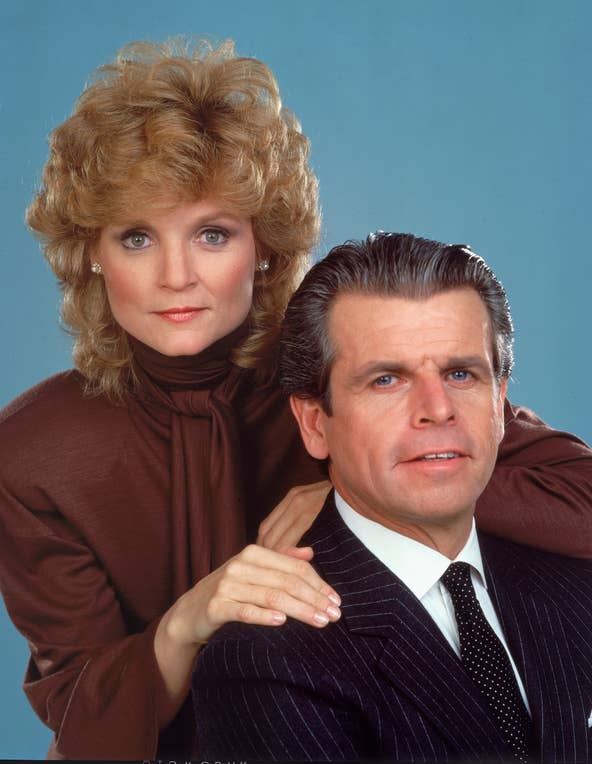 “Knots Landing” (CBS, 1979-93): This spinoff of “Dallas” was set in the Los Angeles suburbs and followed four married couples in one cul-de-sac, including Constance McCashin and William Devane. “Knots” is not available on paid or free subscription services or to purchase digitally.
CBS 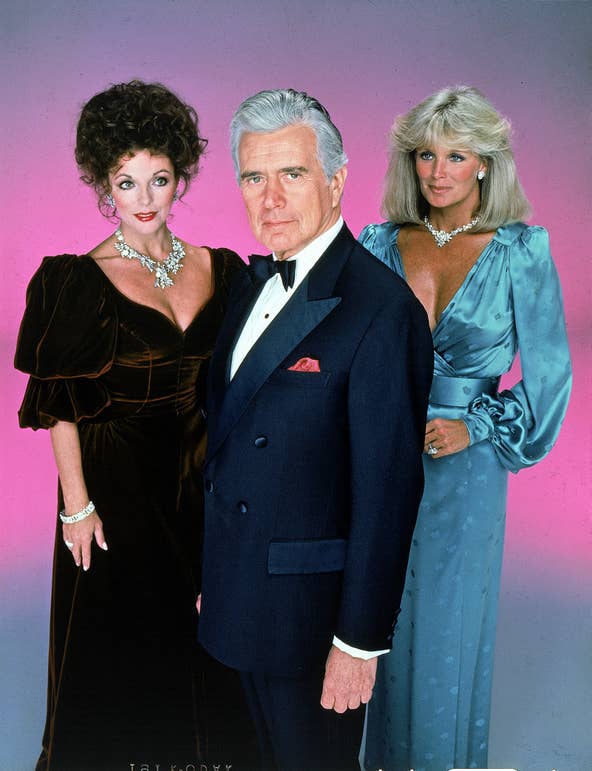 “Dynasty” (ABC, 1981-89): Joan Collins, John Forsythe and Linda Evans starred in this nighttime soap, which centered around the wealthy Carrington family of Denver. “Dynasty” is only available to buy digitally, not on any paid or free subscription services.
ABC 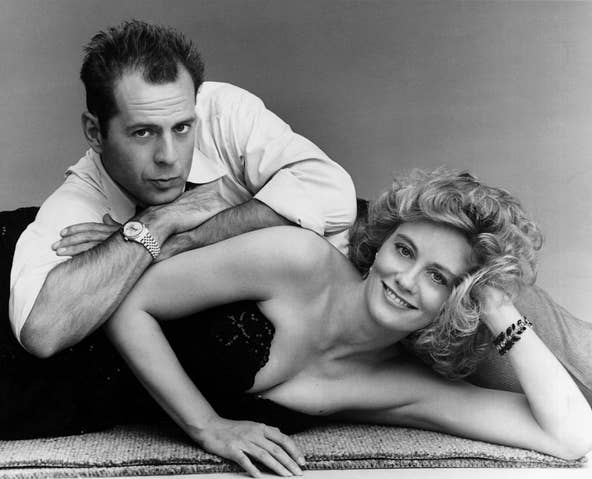 “Moonlighting” (ABC, 1985-89): Bruce Willis and Cybill Shepherd starred in this romantic comedy about a former model and a wise-cracking investigator who work at a detective agency. “Moonlighting” is not available on paid or free subscription services or to purchase digitally.
CAPITAL CITIES/ABC 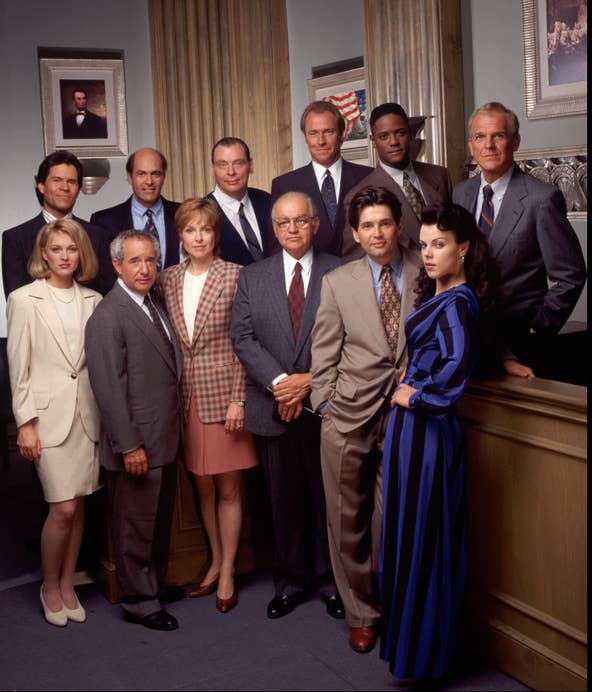 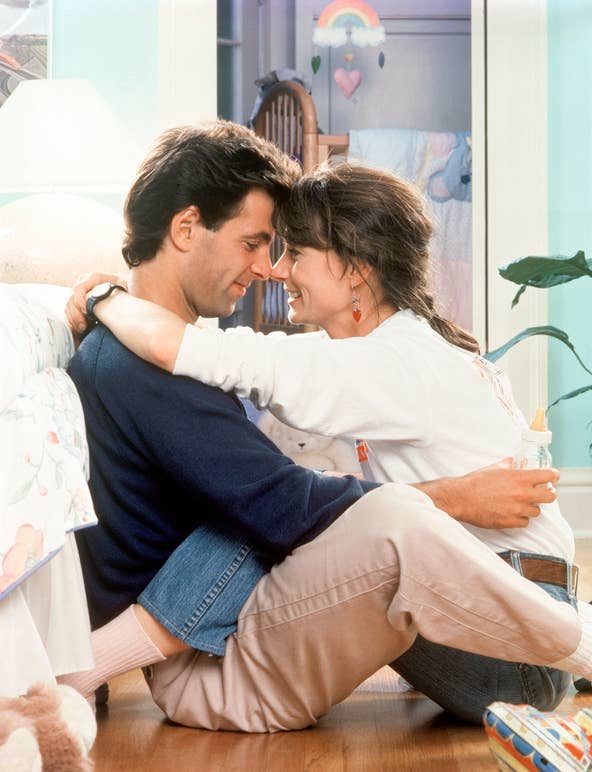 “thirtysomething” (ABC, 1987–91): The drama followed a group of seven adults dealing with this decade of their lives, including Ken Olin as Michael Steadman and Mel Harris as Hope Murdoch Steadman. “thirtysomething” is not available on paid or free subscription services or to purchase digitally.
ABC 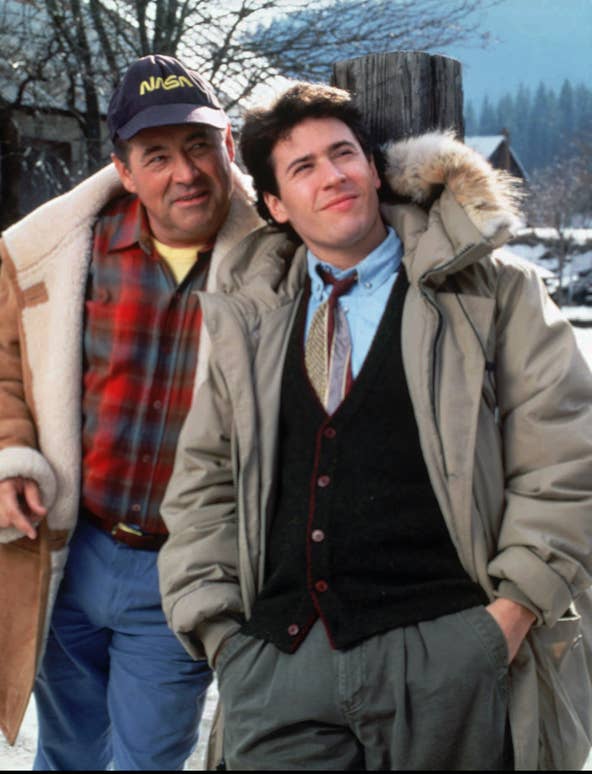 “Northern Exposure” (CBS, 1990-95): In this drama, set in a small Alaskan town, Rob Morrow (right) played Dr. Joel Fleischman, a New York fish-out-of-water in the rural community, among locals like Barry Corbin as Maurice J. Minnifield. “Exposure” is not available on paid or free subscription services or to purchase digitally.
CBS

“Homicide: Life on the Street” (NBC, 1993-99): Andre Bruagher starred in (and won an Emmy for) this dark crime drama. “Homicide” is not available on paid or free subscription services or to purchase digitally.
CHRIS HASTON/NBC

“Chicago Hope” (CBS, 1994-2000): From producer David E. Kelley, this medical drama was set in a Chicago hospital with a cast including Hector Elizondo, Christine Lahti, Adam Arkin and Mark Harmon. “Chicago” is not available on paid or free subscription services or to purchase digitally.
CLIFF LIPSON/CBS 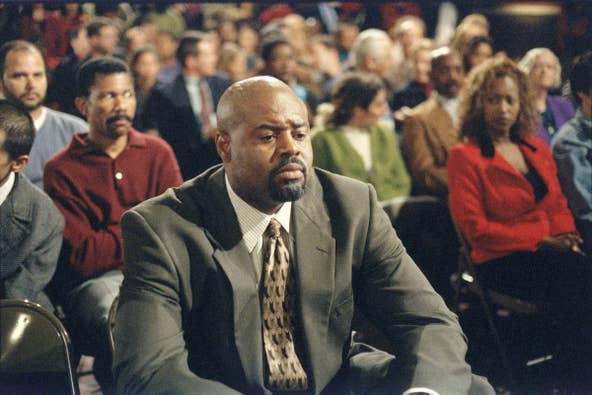 “Boston Public” (Fox, 2000-04): This drama, also from Kelley, was set at a public high school in Boston, and starred Chi McBride as Prinicipal Steven Harper. “Boston” is not available on paid or free subscription services or to purchase digitally.
RANDY HOLMES/FOX