Hilary Swank grew up poor and became a millionaire.
She still uses coupons and sews her own clothes.
Inside her modest life on the ranch in the mountains.

Despite her success as an actress and her reported net worth of millions of dollars, Hilary Swank remains frugal and self-sufficient, using coupons to save money and even making her own clothes. She leads a humble life on a ranch as she prepares to welcome twins.

Swank is a renowned American actress and film producer who made her acting debut in 1993. She gained fame for her performances in various television shows and films, including “Million Dollar Baby” and “Boys Don’t Cry,” both of which earned her Academy Awards for Best Actress.

Swank grew up in poverty, a difficult experience that helped shape who she is today. She endured numerous challenges because of her family’s financial situation, including experiencing “classism” from her friends’ parents.

Swank credits her mother with giving her the “gift of belief” and supporting her acting dreams. In pursuit of her Hollywood career, she and her mother boldly moved to leave their home and drive to Los Angeles.

They had limited resources and even relied on unconventional living arrangements to survive. They lived in their car and occasionally slept in vacant houses up for sale, always leaving before real estate agents arrived to show the properties to potential buyers.

Despite these difficult beginnings, Swank has become a successful actress, earning Academy Awards for her roles in “Million Dollar Baby” and “Boys Don’t Cry” and has an estimated net worth of between $40 million and $60 million.

One of today’s most recognizable Hollywood faces, she has appeared in numerous films and television shows throughout her career. In 2007, she received a star on the Hollywood Walk of Fame. She continues to take on prominent roles in the industry. 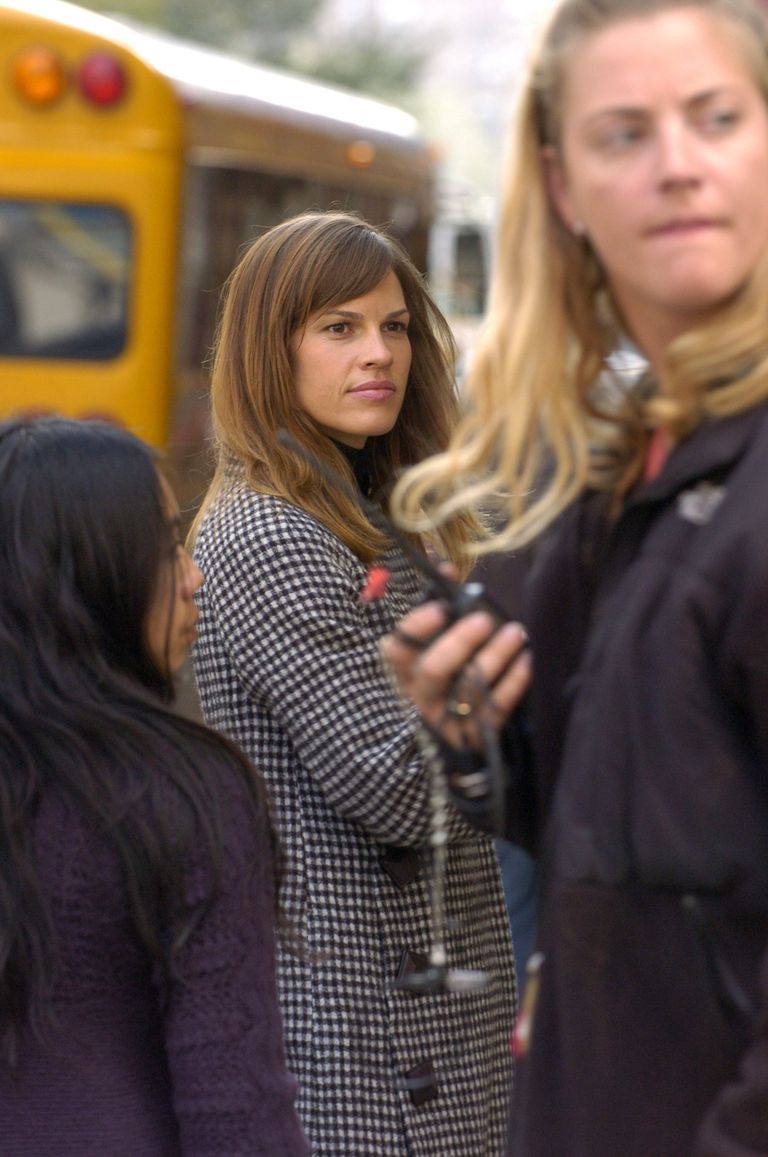 In addition to her acting career, Swank is known for her work as a film producer who co-founded her own production company, 2S Films. She also endorsed fashion and beauty brands.

Swank’s numerous noteworthy contributions have earned her a reputation as one of the most influential people in the world, according to Time Magazine in 2005.

She Still Uses Coupons & Sues Her Clothes
Despite her success, she remains down-to-earth and cites her parents as her heroes and role models for their perseverance and ability to keep her grounded. Swank appreciates her upbringing, stating that she wouldn’t change her humble beginnings for anything.

Swank is not only a woman of many talents, but she is also a role model for her humble and frugal nature. Despite having a massive net worth, she still enjoys using coupons to save money on groceries.

In 2010, she shared her coupon-clipping habits on the popular morning talk show “Live with Regis and Kelly.” Swank said she was not embarrassed about taking advantage of coupons, saying it was part of her childhood. She said:

But it’s not just about saving money for Swank. She also takes pleasure in making her own clothes, specifically through knitting. She has even shared glimpses of her hobby on her Instagram account, posting a photo of herself knitting happily in her backyard.

While people might assume that someone with a vast net worth wouldn’t bother with coupons or knitting their own clothes, Swank’s humility and down-to-earth nature allow her to enjoy the simple things in life.

Inside the Ranch Life
Swank recently moved to a secluded ranch in Colorado, where she enjoys a peaceful and eco-friendly lifestyle with her husband of four years, Philip Schneider. She said:

“It just called to us and we couldn’t stop thinking about it. It was great that we were in the middle of nature. We can’t see our neighbors, no one for miles—we just had [it all] right there.”

She had owned property in Colorado since 2016 but officially relocated to the state when California went into lockdown. The move was motivated by Swank’s desire for more space for her animals and to be closer to nature.

The acclaimed actress has been seeking out a land since she was in her mid-20s, hoping to find a place where she could be surrounded by the things that bring her the most joy.

That dream became a reality when she discovered a 168-acre piece of land in the wilderness of southwest Colorado. Nestled in the mountains, their home offered them the opportunity to be surrounded by nature and have plenty of space for rescue animals to roam freely.

Swank expressed a desire to rescue more animals in the future. Her passion for animal rescue burned brightly, fueling her determination to create a sustainable dream home that seamlessly integrates with the natural environment.

Swank listed her Los Angeles home as part of her relocation plan, initially purchased for $5.8 million in 2007. The six-bedroom, six-and-a-half-bathroom estate, which spans over 6,700 square feet, is now on the market for $10.5 million.

The property, described as a “resort-like vacation villa,” boasts breathtaking ocean views from nearly every room. The garden level includes a guest suite, gym, and a living room with a bar.

The place also has its own 16-seat movie theater room. The bedrooms have private balconies or verandas, a pool, a spa, a fire pit, and a fully-equipped cabana.

It was briefly on the market in 2012 and 2013 while Swank was living abroad in France, but she decided to take it off the market and continue living in the home upon returning to the United States.