Two quick-thinking cops quickly rescued four schoolchildren when their kidnapper ran through a red light. The abductor had enticed the youngest kid into her van, and the older children followed to protect the little one.

Often, we come across heartbreaking stories detailing unfortunate incidents, like abduction, where people are separated from their loved ones, leaving both parties scared and utterly shattered.

However, the pain and trauma become even more unbearable when such stories relate to parents losing their children and vice versa. In Detroit, Michigan, a mother was put through the same misery when her four kids didn’t return from school one day.

Four children between the ages of 11 and 5 were headed to school when a van pulled by the side of the road. A woman came out and convinced all four to get into her van.

She then took off with the kids, hoping nobody had seen her. However, someone managed to get hold of the woman just in time to rescue the children.

Detroit Police Officers Flannel and Parrish were at Minock and Grand River when they saw a van running through the red light. They made a traffic stop at Grand River and Greenfield.

The Detroit officers felt something was wrong, so they walked over to the woman and asked her a question they usually didn’t ask people after pulling them over. Detroit Police Chief, James White, shared:

“Are these your children? To which she said yes, and the children at the same time were shaking their head no (sic).”

According to FOX2 Detroit, when the officers asked the woman about violating the traffic rules, she told them she was in a hurry to drop her children off at the school.

Eighth Precinct Community also shared a Facebook post about the incident on December 3. According to the post, when the officers asked the woman the name of the school the children attended, she failed to give a “good answer.”

Keith Lindey, the father of one of the kids, also extended heartfelt gratitude to the Detroit Police Force for performing their duty and ensuring the safety of the four kids.
Neither of the four kids knew the woman, and it was later discovered that she had kidnapped them while they were walking to school. She had reportedly forced them into the van. 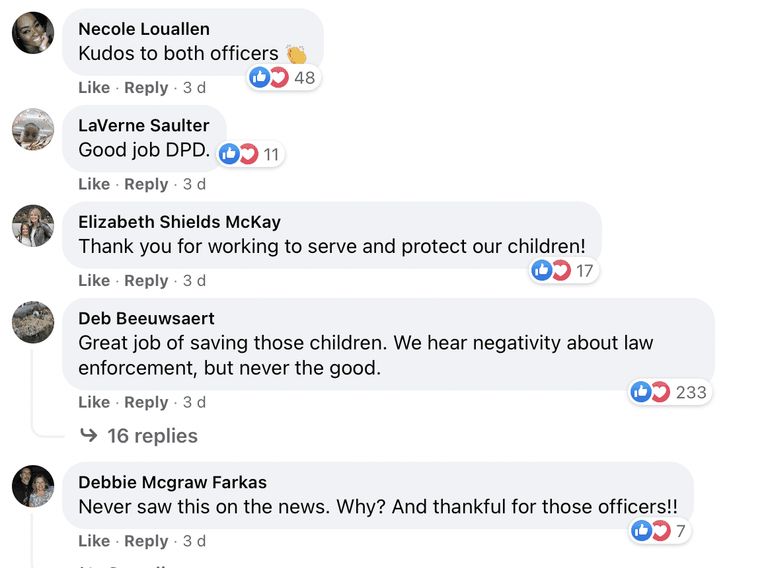 APPRECIATION FOR THE BRAVE OFFICERS

The Detroit Police Department hailed the heroic act of Officers Flannel and Parrish for rescuing the four kids. The caption of the Facebook post shared by the Eighth Precinct Community read:

“These 2 officers exercised excellent police investigate skills, in doing so they were able to take a kidnapper off the streets, and safeguard the 4 children from any hurt, harm and danger (sic).”

The children’s mother, Shayla Burleigh, thanked everyone who helped bring back her kids safely. She shared that the abductor had enticed her youngest kid, following which the oldest one decided to stick by his side to protect him.

Keith Lindey, the father of one of the kids, also extended heartfelt gratitude to the Detroit Police Force for performing their duty and ensuring the safety of the four kids.

Indeed, Officers Flannel and Parrish did an incredible job rescuing the kidnapped children. We need more kind-hearted and hardworking people like them. If this heart-touching inspired you, don’t forget to share it with your loved ones.