Poor Dad & Daughter Have Nothing to Eat, Stranger Surprises Them with Food & Money as Christmas Gift

Kindness and love are the most precious gifts we can give people because they only multiply in magnitude when shared. Moreover, they trigger a chain reaction, inspiring others to do the same. A Good Samaritan did just that when he made Christmas merry for a daddy-daughter duo.

In a world where we can be anything, choosing empathy and extending a helping hand can make a significant difference in people’s lives. It doesn’t matter how much you can give if your actions stem from genuine care and concern.

One day in December 2021, a kind-hearted man engaged in a similar activity when he saw a father with his little girl on the roadside. The noble recipient was none other than BI Phakathi, a filmmaker, motivational speaker, philanthropist, and vlogger hailing from South Africa. 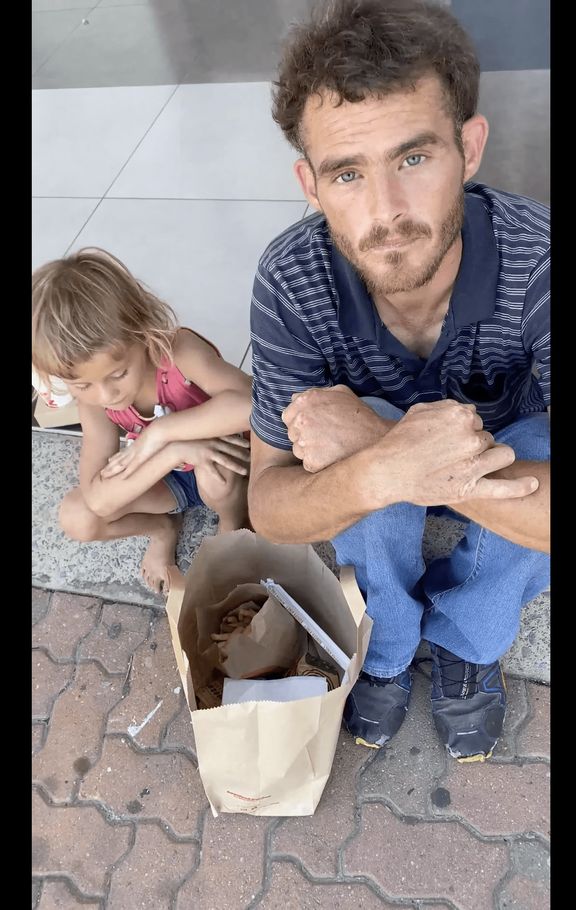 It was a bright sunny day when Phakathi noticed a man and his daughter with a small backpack and a few sweets. When he approached the pair, he poke-punched the man and greeted him and his kid with a warm Christmas greeting.

As was expected, the father was deeply touched and asked his kind-hearted benefactor if he was the renowned BI Phakathi.
Then, Phakathi asked the man how everything was on his side, to which he replied that he had been without work for the past three months. He went on to explain that despite being qualified in petroleum engineering, he was sitting without a job and no proper means of sustenance for his family. 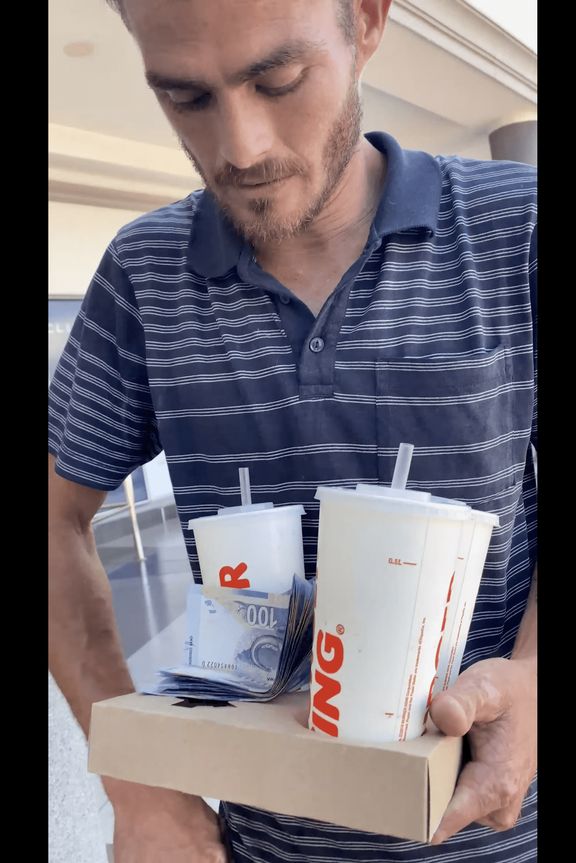 Surprising Them with Food
Seeing that the distraught father could use a little uplifting, Phakathi went to a nearby Burger King and bought meals for the daddy-daughter duo. After handing them food, the famous vlogger reminded them that it was Christmas and they deserved to rejoice.

Still, Phakathi couldn’t help but notice the dad’s mellow mood and asked, “So, tell me, what can I do for you to make things better for you?” To this, the man replied: “[You] already did for me.” But on Phakathi’s insistence, he said he needed nappies for his other child (who wasn’t shown on camera). 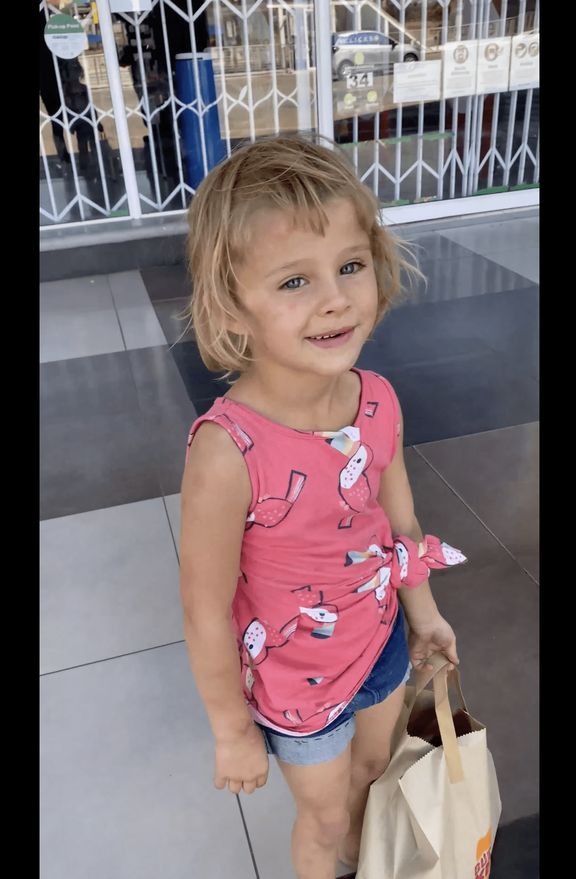 It’s Never Too Much
When the South African filmmaker asked the dad how much the diapers would cost, he responded that the cheap ones would be 35 rands. However, Phakathi took out a stack of cash instead of giving him the exact amount and handed them to the father. Seeing the huge amount, the little girl chimed:

In a light-hearted tone, Phakathi turned to the adorable child and gave her more money, reminding her not to harbor the thought that it was too much. The moment she took the cash, he added:

That’s your Christmas gift. Give it to daddy.” 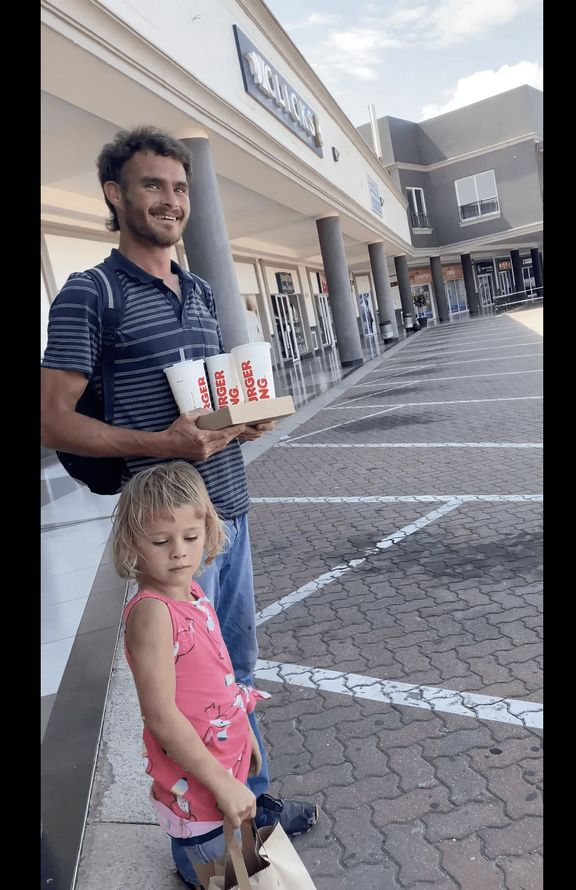 Supporting the Man to Start His Business

But that wasn’t all. Phakathi once again told the man that it was Christmas and everyone deserved to celebrate the festive occasion with their loved ones. Then, he mentioned that he didn’t wish to see the father and his little angel on the road and took out another pile of cash.

Phakathi told the man that he would be pleased if he could start his own business. “I can start my own business, but I don’t have [the] tools,” answered the man. Soon afterward, the kind philanthropist took out more money and gave it to the father, hoping it would help solve his predicament.

As was expected, the father was deeply touched and asked his kind-hearted benefactor if he was the renowned BI Phakathi. “No, I’m just Father Christmas. Love you,” said Phakathi and wished the dad and her little girl to take care of themselves and enjoy.

Phakathi posted the video on his official YouTube channel on December 26, 2021, where it became an instant viral sensation, racking up millions of views, likes, and comments from netizens far and wide. Many appreciated his generosity in helping the deserving man just in time for the holidays:

“This man is an angel. The world needs more people like him.”

“That’s the most humble and beautiful child I’ve ever seen. Hope she ends up having the life she deserves.”

“This was absolutely wonderful for you to go out and help these two people in need you have a big heart we need people more like you in this world (sic).”

“That little girl is so innocent, honest and humble. This breaks my heart seeing families struggling like this. Everyone has a right to have food and shelter.”

Undoubtedly, the spirit of the holiday season is giving and sharing whatever you have with someone who could use a little bolster and cheer. We loved sharing this magical Christmas story with you, and if it warmed your heart, we would be happy to hear your feedback.