Restaurant Owner Is Asked To Remove “Controversial” Sign From His Window

V Pizza, a pizza restaurant chain based in Jacksonville, Florida, came under fire after one of their Georgia franchisees posted a sign in the window of the location that left customers with a bad feeling in their stomachs.

Now, the franchise’s corporate office has come forward to criticize their Georgia colleague for posting the sign that complained about how hard it was for them to find employees during the COVID-19 pandemic due to the government help that has been made available to people who are struggling to make ends meet as a result of the collapse of America’s economy.

The controversial sign that was posted in the window of the Georgia location reads: “Sadly, due to government handouts, no one wants to work anymore.

Therefore, we are short-staffed. Please be patient with the staff that did choose to come to work today, and remember to tip your server. They chose to show up to serve you.” 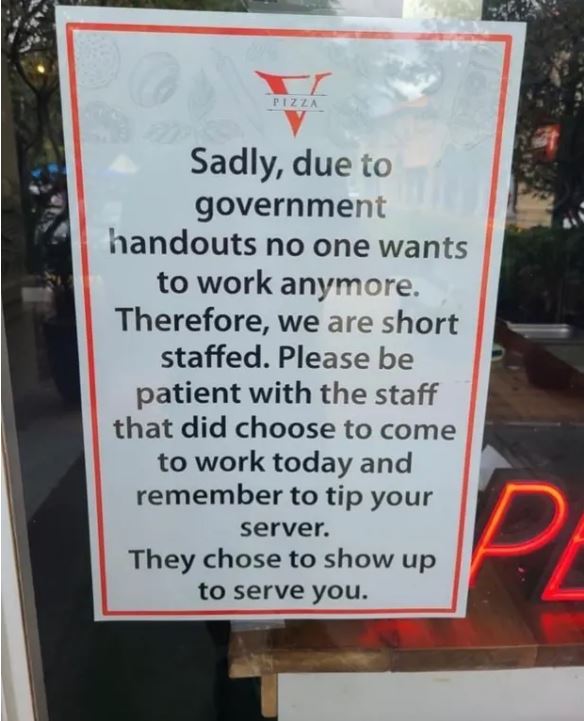 When social media users caught wind of the bad attitude wafting out of the Georgia pizza franchise location, the social media user took a snap of it and shared the sign to Twitter, writing:

“Bummer to see this coming from @VPizzaJax.”

Social media users were quick to point out the hypocrisy of the pizza franchise since several V Pizza restaurants received millions of dollars in Paycheck Protection Program or PPP loans from the federal government to keep employees on staff.

The company was able to use the government handout to rehire employees they had been forced to lay off as a result of the pandemic, and that the government assistance really helped their business stay afloat.

Paul Scott, the owner of the franchise, told News4Jax that he asked the owner of the Georgia location to remove the controversial sign from the business window after he learned from social media that it had been put up.

“That sign and the wording with it, there’s so much wrong with it,” he said.

“But, the one truth of the sign is everyone is having a hard time hiring because the reality is what we can pay our staff, you know, typically one of our staff members makes $14-$15 an hour if a person is sitting home and they have children that they’ve got to put in daycare and they’re able to get almost as much money staying at home and keeping their kids versus daycare.

Nobody blames a person for making a smart decision for their family.”

He added, “Yes, we are understaffed, there is no doubt, but we’re not so severely understaffed. Our people, the workforce, come in with a great attitude every day. As an owner, we try to support them in every possible way that we can support them.”

Throughout the pandemic, the state of Florida, under the leadership of Governor Ron DeSantis, gave an additional $300 per week to people on unemployment but was looking to remove that benefit to get people to “return to work.”

“Now, we’re transitioning from a kind of relief in the midst of a crisis to now having the more traditional re-employment outlook,” DeSantis said in a press conference in May.

Florida is currently the new epicenter of the pandemic in the United States.