Roseanne Barr is an American comedian and actress who is best known for her self-titled television series “Roseanne.” Barr won an Emmy Award and Golden Globe for Best Actress for her performance on the show. She began her career as a stand-up comedian in 1980 after already living as a full-time wife and mother. She drew on this experience for her comedy act, coining the phrase “Domestic Goddess” to refer to homemakers.

In 1985, Barr appeared on the “Tonight Show” and quickly gained popularity. This led to her own HBO special called “The Roseanne Barr Show.” The program won her an American Comedy Award for best female performer. The success of her stand-up career drew the attention of television producers, and Barr was offered her own ABC series titled “Roseanne.”

The comedy star has also made a name for herself as a presidential candidate of the Peace and Freedom Party in 2012. She earned nearly 70,000 votes in that year’s general election.

Barr has since lost popularity after she sent out a controversial tweet that caused ABC to cancel a reboot of “Roseanne” in 2018. The show lived on in another form, now called “The Connors,” which explains that the matriarch of the family passed away.

In 2021, Barr lives in Hawaii in the town of Honokaa on the Big Island. She is enjoying her time out of the spotlight and lives a life of luxury in her mansion that used to be a museum. Read on to learn more about Barr and her incredible home.

Barr’s sitcom “Roseanne” ran for nine seasons from 1988 to 1997. The show was very successful and had high ratings. Besides Barr’s comedic chops, the show had another highlight in the father of the Conners, played by John Goodman. Despite Barr’s harsh feelings toward the producers and writers behind the show, she still has only good things to say about her co-star Goodman.

She told Entertainment Weekly in 2008: “Goodman was the only person who read for the role. There were more planned, but the second I met that guy, I fell in love with him.”

One of the main reasons that Barr was angry about the show was because the “created by” credit went to writer Matt Williams instead of her. Barr explained, “We built the show around my actual life and my kids. The ‘domestic goddess,’ the whole thing.”

Barr was so angry that she wanted Williams to leave the show. She shared, “That’s when I said, ‘You better get rid of that guy or I’m leaving!’ Oh, we almost killed each other. He’s never apologized to me. I was the writer. It wasn’t that it was based off my life — it’s that I wrote it. I created it. I thought it up. I lived it. That’s why I hate everybody.”

Recently, Barr has spent much of her time updating her YouTube channel with interviews of political figures and celebrities, such as the comedians Tim Dillon and Ryan Long. Other than her presence on social media, Barr has kept out of the spotlight, however. 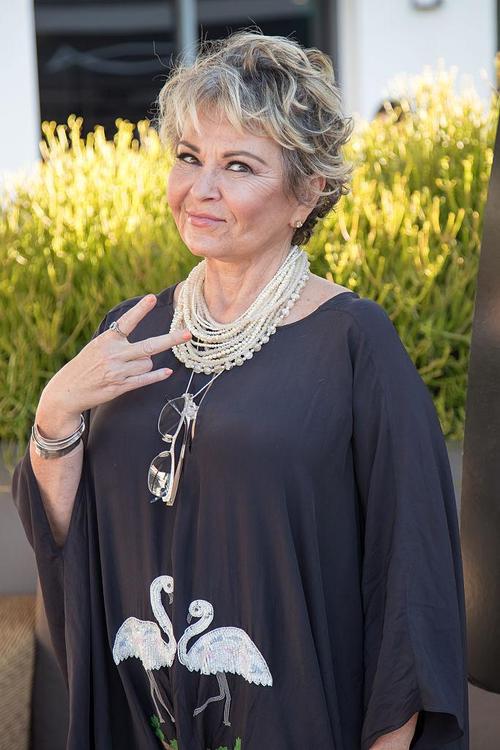 On top of her career issues, Barr has also focused a lot on her physical health and weight loss journey. When Barr first became famous, she was heavier but gradually worked on changing her appearance over the years. In 2006, Barr told WebMD, “I feel great for a fat, cranky, old, left-leaning Jewish grandmother.” She also jokingly said that her hero was “whoever discovered the cacao tree.”

Back in 2008, Barr and her manager spoke with The Guardian about dieting to get a gastric band fitted. Still, Barr found herself craving “the three Ds: dough, something dead and something dairy.”

The outlet reported that Barr had previously had a breast reduction, tummy tuck and nose job. Part of it was to get away from her partner at the time, Tom Arnold. “Every time I had a break I would have surgery,” she said. “I think just to get away from him and then when I came back there’d be nurses in the house and I wouldn’t be alone with him.”

Barr has come a long way in her personal life since then. In 2014, she told Today about her diet: “It’s radical and revolutionary. It’s where you eat less and move more – you know, just simple.”

The comedian added, “I just want to keep getting healthy and let go of excess baggage to carry around, so I’m lighter on my feet and in my life.”

Now, she is in a happy relationship and feeling better about herself. The pair have also made a comfortable home for themselves in beautiful Hawaii surrounded by nature.

Since leaving the spotlight in 2018, Barr has been enjoying her private life in Hawaii with her long-term partner Johnny Argent. The couple met online and have been together since 2003. In 2007, Barr purchased a 46-acre property with a gorgeous three-bedroom and three-and-a-half bathroom home. According to Virtual Globe Trotting, the property cost $1.78 million at the time it was purchased.

In 2018, Barr shared a video on YouTube that claimed her house was a museum before she moved in. In the video, she said, “I think it’s time for me to start telling the story of this museum. I bought and refurbished (it), and I think I’m going to be taking pictures of it so people can see it.” The video shows a sign in Barr’s home that used to belong to the museum owner.

Barr often shares photos online of herself around her home. These show off her eclectic sense of style. The posts also give us a nice glimpse into the layout and style of the star’s beautiful mansion. One of the highlights is her beautiful outdoor garden area, which is complete with patio furniture. You can see lush green plants in the photos, and it looks like the perfect spot to relax.

The home also features stunning views of the ocean and seems like a wonderful place to live. Barr’s career may have slowed down but her life hasn’t. The comedian has five children of her own and seven grandchildren who keep her busy. She loves to share photos of her family on her Instagram page as well.

What do you think of Barr’s Hawaiian home? Would you live in a house like this? Let us know, and feel free to send this on to your friends and family.