Steve Harvey carries many titles. He is a comedian, a TV show host, an author, and a dad, but none of it came easy. Once homeless, he’s scaled his way up to become one of America’s most adored celebrities.

Steve Harvey is the staple of daytime TV. An acclaimed host of “The Steve Harvey Show” and “Family Feud,” he has defied all odds to rise to the top, a long way from his homeless days.

As a child, he had an odd nickname, “Va-Va-Vroom,” due to his pronounced stutter. But a local deli worker came to his rescue when he taught him to pronounce difficult words at least thrice in his head before saying them out loud.

His family then moved to Cleveland, Ohio, where the renowned star later had a street named after him. He attended Glenville High School before going to Kent State University, then to West Virginia University.

As a young man, Harvey took on an untraditional roster of penniless jobs to make ends meet. He worked as a mailman, a carpet cleaner, an insurance salesman, a boxer, and an autoworker at a Ford auto plant. 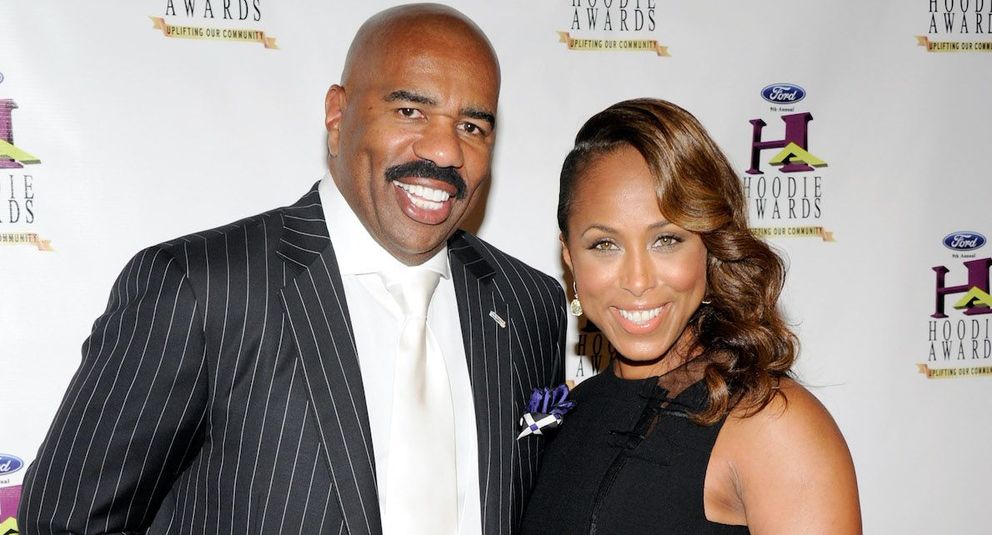 While many artists often begin working on their future careers from an early age, it was different for Harvey. He began his stand-up comedy career relatively late in his life. He was 27 when he landed his first gig.

The decision to quit his job to try his luck at being a comedian did not sit well with his wife, Marcia, and they separated. Harvey, however, still took the chance, landing his first gig performing at the Hilarities Comedy Club in Cleveland.

He had a few jobs here and there, but the money he was making was not enough. He was living on as little as 50 dollars a week as the rest of the money would support his twins, Brandi and Karli, now 40.

Harvey would end up homeless in this period, living in his 1976 Ford Tempo whenever he took on gigs that did not provide for accommodation. He would also steal fuel from gas stations if only to make it to comedy gigs.

For three years, he struggled to survive, showering at swimming pool showers and gas stations. He would use his cooler as a refrigerator and mainly survived on bologna sandwiches. But even at his lowest, he kept pushing. He said of the period:

“That was an ugly period, just very painful. Everybody has a moment when they turn back, when you say to yourself, ‘This is too much.’ I had it on several occasions.”

One time he sat down and started crying, but then, he heard a voice tell him to keep going, and he will reach places he’s never been before. He says it was like God was speaking to him, asking him not to give up.

And he held on, soon landing a high-profile gig at “Showtime at the Apollo.” After that, work kept coming. He eventually landed a sitcom, then a spot on “Cedric the Entertainer.” He’s never looked back.

FROM RAGS TO RICHES

Harvey’s story is one of resilience and the perfect example of going from rags to riches. He turned his life around by working hard, never taking a break because, as he says, he’s still running away from homelessness.

The “Act Like a Lady, Think Like a Man,” author worked his way up to the top, earning himself the title of “Hardest Working Man in Show Business,” and he doesn’t seem to be slowing down. Today, Harvey sits at the helm of a multi-million-dollar empire.

Estimated to be worth 100 million dollars, Harvey has amassed his wealth from working as a stand-up comedian, a bestseller author, a movie actor, and a radio and TV host.

Away from his work, Harvey prides himself in having a close-knit blended family with a lovely and hard-working wife, seven children, and five grandchildren.

Like his success, love has not always come easy for Harvey. He’s been married three times and divorced twice. He married his first wife Marcia in 1981, while he worked as an insurance salesman.

The “Act Like a Success” author was still trying to make his way into comedy and thus spent a lot of time on the road. It is one of the reasons their marriage couldn’t work. They separated in the late ’80s, finalizing their divorce in 1994.

The two share three children, twins Brandi and Karli, and son, Broderick Harvey Jr. Since their split, Marcia has kept a low profile and has made her mark in the industry as a published author. 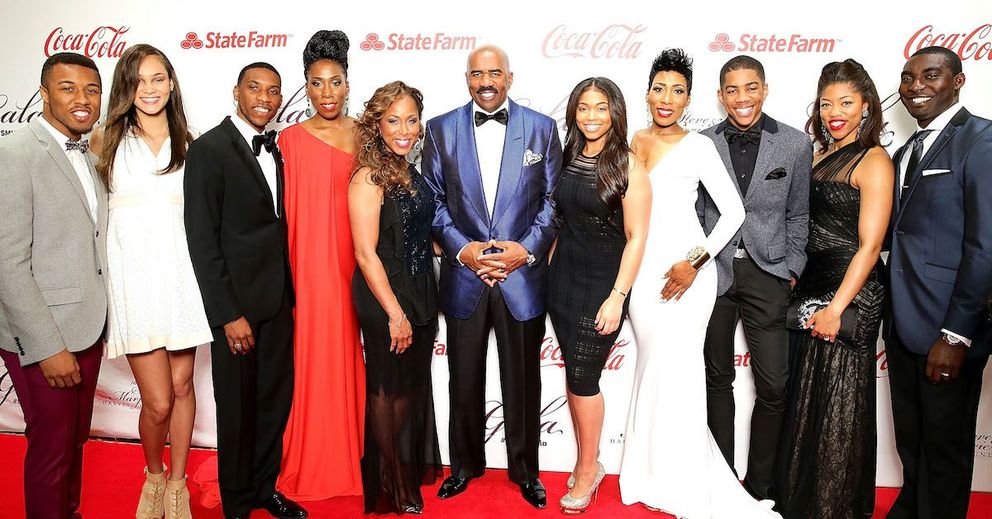 Harvey began courting his second wife, Mary Shackelford, before finalizing his divorce from his first wife. The two married in 1996 and had one child, Wynton. Their marriage lasted nine years, and in 2005, they parted ways.

THE THIRD TIME’S THE CHARM

Harvey fell in love again after a very messy divorce from his second wife when he met his third and current wife, Marjorie Bridges.

According to the couple who’s been married for 15 years, it was love at first sight for Harvey, and the moment he saw Marjorie, he knew he was going to marry her.

The proposal was just as magical as their first encounter. Harvey flew Marjorie out to Cabo, Mexico, and on their first night there, he hid a diamond ring in her dessert.

Even though the two did not have children, Harvey fully adopted Marjorie’s children, Morgan, Jason, and Lori, from her marriage to Darnell Woods.

Besides being doting parents to their seven children, the two are also grandparents to five. These include Jason’s three children with his wife, Amanda.