Prince Harry showed off his credentials as a dog lover this weekend, when he was filmed petting two pooches during a walkabout in Windsor.

The Duke and Duchess of Sussex joined the Prince and Princess of Wales as they went to the castle to look at floral tributes left for their grandmother, the Queen, who died last Thursday at Balmoral.

During the walkabout, the once-named ‘Fab Four’ were filmed greeting members of the public, who shared their condolences.

And Prince Harry, 37, seemed particularly enthusiastic about meeting two attendees in particular – a golden Labrador named Louis, and a small grey dog whose identity is not known. 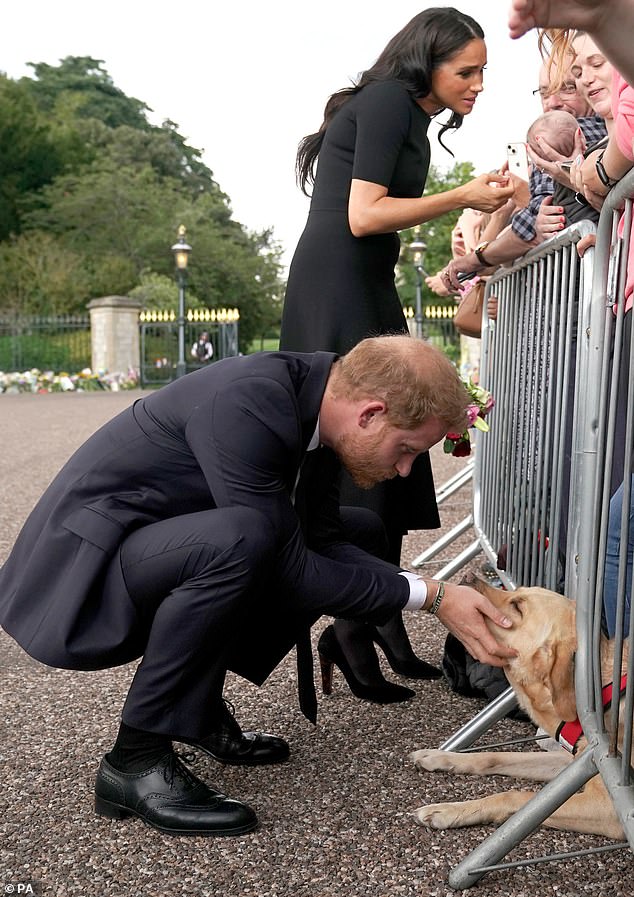 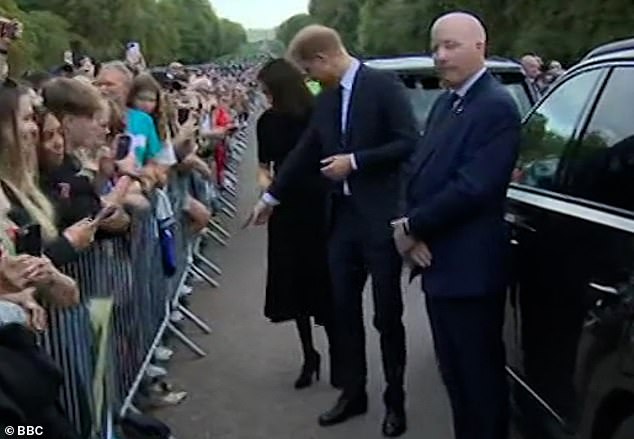 Prince Harry (centre) is seen pointing out a small grey dog to Meghan (left), who also seems excited to see the animal

In one of the clips, the royal is seen crouching down to give Labrador Louis ear scratches, with the canine appearing appreciative of the royal attention.

According to the Daily Star, the Labrador is called Louis, and belongs to Sarah Gracie, from Surrey, who shared images of the prince and her pooch on Twitter.

She wrote: ‘When our little pup Louis met Meghan and Harry as we paid our respects to The Queen.’

Meanwhile, a second clip shows both the Duke and Duchess getting excited about a small, grey dog.

As the couple walk past a crowd, Harry spots the small animal lying on the ground, and points down.

Meghan then follows suit, pointing at the dog, before the pair appear to start talking to the dog’s owner.

Just before the camera pans away, Prince Harry appears to be moving towards the animal, perhaps to pet him. 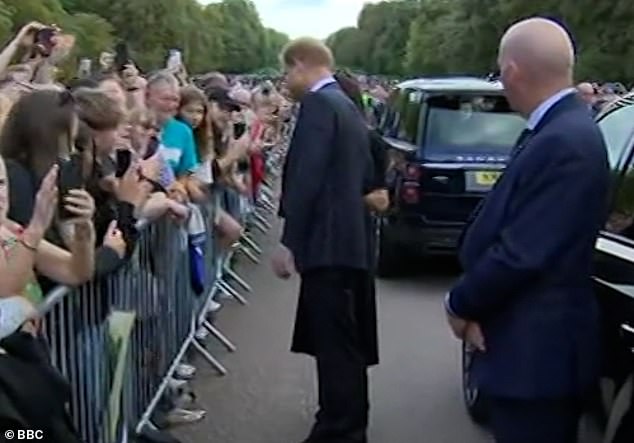 The California-based couple were filmed walking past the dog, who appeared to catch Harry’s eye, and he stopped to look down at the animal 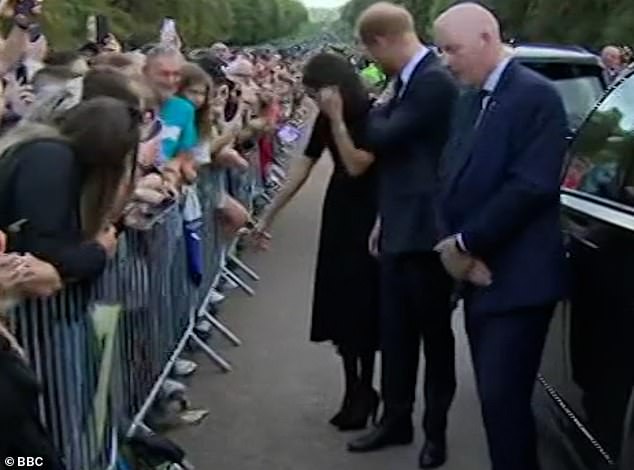 After seeing the dog, and pointing it out to Meghan, the Duchess then appeared excited herself, pointing at the small grey pooch

The Duke and Duchess of Sussex are both thought to be dog lovers, and earlier this Summer were praised after adopting one of 4,000 beagles rescued from an animal testing centre in the US.

The seven-year-old pooch, named Mamma Mia, is now reportedly living with Harry and Meghan and their children Archie and Lilibet at their $14m, seven-acre mansion in Montecito, California.

The couple already have a pet beagle named Guy and a Labrador called Pula. The family also have chickens, who are thought to have been rescued from a factory farm.

Mamma Mia was one of 4,000 that had been bred at the Envigo breeding and research facility in Virginia. 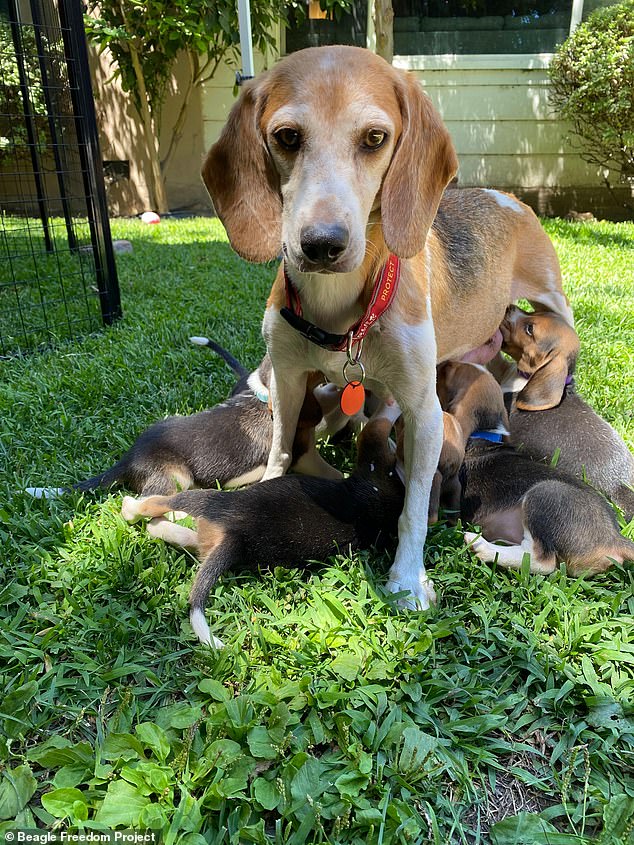 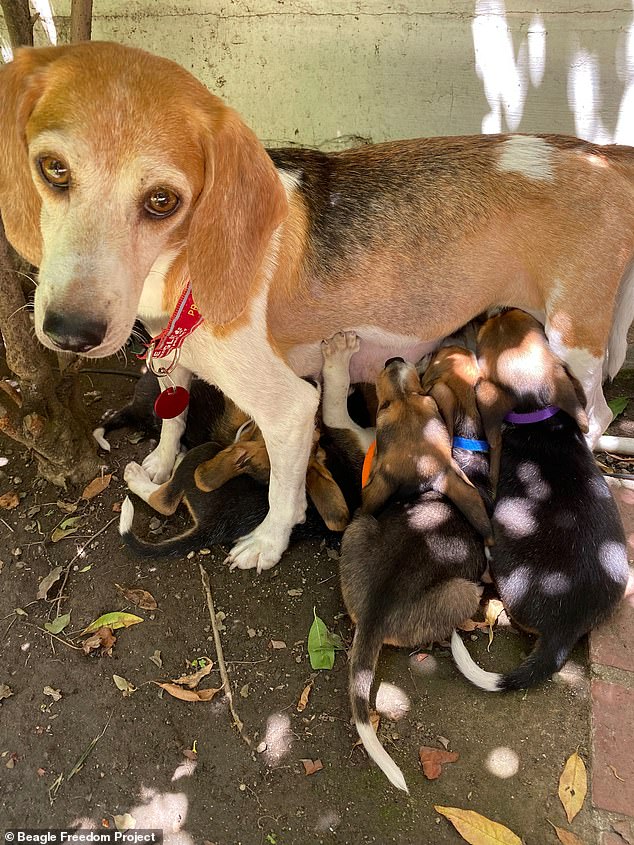 Meghan and Harry are said to have made an after-hours visit and played with Mia, who had been brought there with eight of her newborn puppies

The dogs were bred so they could be sold for use in pharmaceutical and biotech research.

Several inspections of the Envigo facility over the past two years found dozens of violations of US federal regulations.

The animals were rescued in July and taken in by organisations including the Beagle Freedom Project, who looked after 25 of the dogs.

Shannon Keith, an animal rights attorney who runs the project, told the LA Times: ‘The duchess called me personally.’

She added: ‘She calls on my cell with no Caller ID and says, ‘Hey Shannon, this is Meghan.’

Ms Keith said they talked for 30 minutes and she wondered if it was Megan Fox, but it was indeed the Duchess of Sussex.

Meghan and Harry are said to have made an after-hours visit and played with Mia, who had been brought there with eight of her newborn puppies. 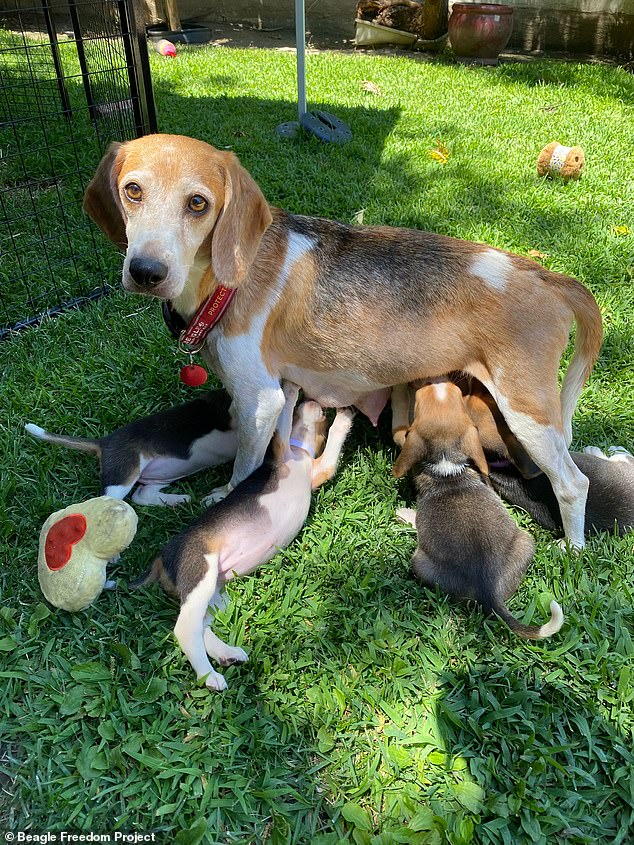 The animals were rescued in July and taken in by organisations including the Beagle Freedom Project, who looked after 25 of the dogs. Above: Mia with her puppies 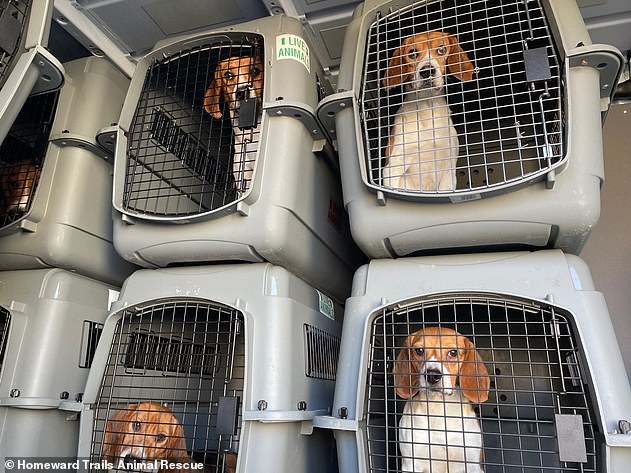 Ms Keith told the Los Angeles Times: ‘The duchess is holding Mia and was like, ‘We’re adopting her.”

‘She was like, ‘No, we don’t want a Christmas puppy. We want ones we can help who are older.”’

Animal-lover Meghan has adopted a number of rescue dogs over the past few years and brought her American rescue beagle Guy to the UK when she married Harry.

The former actress chose animal welfare charity Mayhew as one of her first patronages.

When she moved to England to be with Harry she had to leave Bogart – a Labrador-shepherd mix – in the US.

Meghan has previously said the pair of rescue dogs ‘mean the absolute world’ to her and has referred to them as ‘my loves’ and ‘my boys’.

Share or comment on this article: Sweet moment Prince Harry called Meghan over to look at a dog during Windsor walkabout