When a youngster took the painstakingly difficult decision to end her suffering, she knew her mom would take it too hard. But before saying goodbye, the mother-daughter duo shared a special moment that would forever be etched in their minds.

Life is filled with moments of sheer wonder, surprise, ecstasy, and sorrow. It’s often said that pain and grief change people most unexpectedly. Nothing lasts forever; however, the void a loved one leaves behind stays with us long after they’re gone.

While we can’t turn back the hands of time, the least we can do is enjoy our favorite moments while they last and cherish them for the rest of our lives. The story we’re sharing today centers around a similar theme. 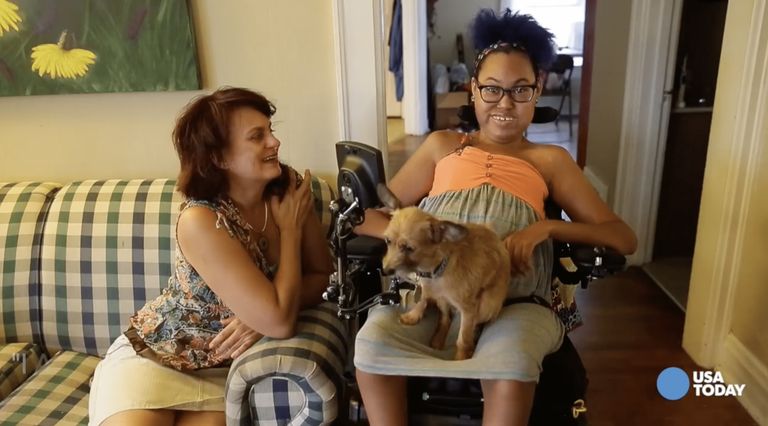 Jerika Bolen lived with her mother, Jen Bolen, in Appleton, Wisconsin. “My Chemical Romance” was her favorite band; she enjoyed following YouTube celebrities. She had purple hair, wore green lipstick, and liked going to the mall. Her Facebook feed was filled with memes and beauty tutorials.

But soon after prom, Jen had a soul-crushing realization.
In addition to spending time with her mom, Jerika loved being around her girlfriend. Per Jen, her daughter always flashed a smile in public and photographs, but only she knew what was behind that smile.

At eight months old, Jerika was diagnosed with Spinal Muscular Atrophy type 2, an incurable disease for which she used a wheelchair. Her brain functioned normally, but everyday movements like breathing and swallowing brought her excruciating pain.

She could talk but had never walked and only had movement in her head and hands. When Jerika turned eight, her pain became highly unbearable. Despite numerous surgeries to ease muscle control and movement, her pain was at 7 or 8 on a 10 scale on most days.

There were times when the pain went as high as 9 or 10. Jen shared that her daughter continued to undergo different procedures, but none of them alleviated her suffering. When Jerika was five, Jen started nursing school for financial reasons and to better care for her little girl.

For a long time, Jerika said she stayed strong and kept fighting for her loved ones, particularly her mother. But over the ensuing years, her pain only worsened, and after her 38th surgery, Jerika decided she had endured enough.

In June 2016, the then-14-year-old Jerika shared the news with her mother with her counselor’s help. After hearing that her young girl wanted to go off life support, Jen’s world was turned upside down. Still, she told her daughter:

Jen and Jerika’s family and friends had seen her fight bravely. Her grandmother, Sue Bolen, expressed:

“She’s a very unselfish little girl and she’s tougher than anyone I’ve ever known.”

While Jen supported her teen daughter’s decision, she felt deeply sad and shattered. The Wisconsin resident recalled that her daughter never wavered in her decision to stop the treatment and became much more confident afterward.

Eventually, Jerika transitioned to hospice, and her pain became harder to manage. Like most youngsters her age, she had always longed to attend high school prom. Little did she know that her heartfelt dream would come true in the most remarkable way.

To fulfill her baby girl’s dream, Jen set up a GoFundMe fundraiser and planned Jerika’s prom, titled “J’s Last Dance.” On July 22, 2016, Jerika felt like a real-life prom queen in her gorgeous emerald dress and tiara, surrounded by family and friends at the Grand Meridian ballroom in Appleton, Wisconsin.

Her favorite YouTuber, Richie Giese, also made a special appearance. The mother-daughter duo shared a touching last dance to make the night memorable. “I got to dance. I got to meet my idol,” expressed Jerika.

For any early risers that couldn't make it to Jerika Bolen's prom here is the photo gallery. https://t.co/5eUv7zhk3O pic.twitter.com/yKLAKt7je8

When Jerika’s prom night story went viral, she garnered love and appreciation from people worldwide. But soon after prom, Jen had a soul-crushing realization. She recounted:

“Now that prom is over, I know that the time is getting closer. That’s the only way I’m going to be able to move on with my life — knowing that I’m letting her out of this suffering.”

After being visited by her grandparents, watching fireworks and movies, and enjoying sleepovers and an unforgettable prom night with her mom, Jerika died peacefully at Sharon S. Richardson Community Hospice in Sheboygan Falls in September 2016.

Before leaving, the Appleton teenager left tokens of love for her family and friends, including stuffed bears with touching notes. The one for her mother said:

DANCING IN THE HEAVENS

Three weeks after her daughter’s death, Jen revealed that she had a beautiful dream where Jerika was in a wheelchair, and she followed her. After some time, she said her baby girl got up, took a few steps, and began twirling with a smiling face.

When Jen woke up, she said she felt contented to know that her young girl was okay and free of all pain and suffering. Indeed, losing a loved one is not easy, and the pain of saying goodbye to your child can take an emotional toll on parents.

Our heart goes out to Jen and her entire family, and we are sure that young Jerika is dancing and smiling at her mom and all of us from the heavens.