When comedian Chris Rock made fun of Will Smith’s wife’s medical condition, he took things too far. After Smith realized that Rock was poking fun at Jada Pinkett-Smith’s alopecia, which results in hair loss for many Black women, Smith rose from his seat in the audience, climbed up on stage, and delivered a slap across Chris Rock’s face that was heard around the world.

But could Smith’s slap have been faked? Sources are now coming forward with evidence to suggest that Smith and Rock might have staged the incident for publicity’s sake.

According to a report by Rare, “slow-mo video pretty well shows that Rock was ready for this entire thing.” In the video below, you’ll be able to see Smith’s Oscar slap in slow motion and determine for yourself whether Rock was prepared to take the hit on national television or not.

One image that has been floating around the internet that may or not be real has some people casting doubt on whether or not the Oscar slap was faked. If the doctored image of Chris Rock is to be trusted, it appears that the comedian is wearing a cheek guard that would have helped him absorb the impact of the slap that Smith delivered with his right hand. However, it seems that this image was edited to purposely cause confusion and spark rumors.

Critics argue that Smith was simply defending his wife’s honor. Rock had made a joke about Pinkett-Smith’s disease called alopecia which causes her to lose hair on her head. The disease is a prominent problem within the African American community as Black women all over the world have to deal with the struggle associated with alopecia and face the world with thinning hair or bold baldness. 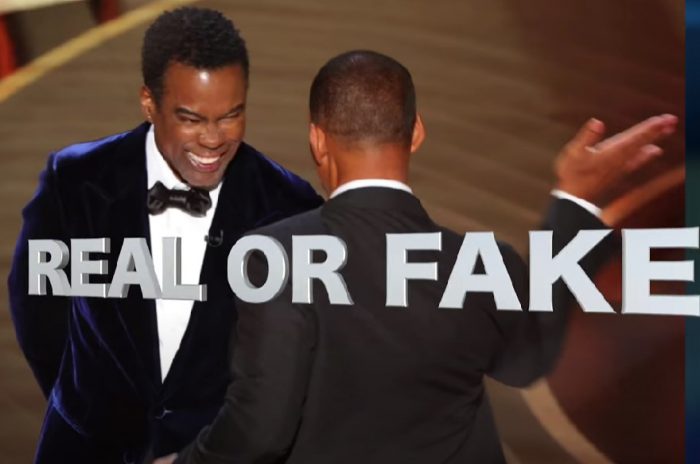 Rock joked that Jada Pinkett-Smith looked like G.I. Jane with her shaved head. In the movie, Demi Moore shaves her own head to better fit in with the Army. It was her choice to shave her head. Pinkett-Smith did not have a choice to go bald. She was forced into baldness by a disease that affects her hair follicles and causes them to thin and stop growing.

Although Smith initially thought the joke was humorous – he was filmed laughing at Rock’s dig – his wife was not happy about the joke about her disease. As soon as Smith realized that the joke had hurt his beloved wife’s feelings, he did the honorable thing of rising up and challenging Rock with a slap to the face.

But writers for Rare suggest that Smith and Rock might have cooked up the ploy from the beginning.

“But defending his wife against a longtime friend? Nah. These guys are boys.”

But if the incident was indeed faked, who benefited from all the publicity? In truth, the entire movie industry received the benefit because people were finally paying attention to the Oscars after so many years of boycotts and disgruntled viewers.

Although there is some speculation that the slap could have been faked, most people agree that it was as real as real can be. Smith was simply defending his wife’s honor – it just so happened to occur while the event was being recorded for national television.