Not far from his house, Dave hung a laminated sign in the woods. He wanted to address his concerns to the “anonymous passerby” who had complained about a treehouse he and his sons had built in order to get local authorities to agree to have it torn down. The person had filed a complaint with Dave’s homeowner’s association, which did not care that he and his two sons had built the treehouse – and now Dave wants his message to reach the anonymous “Karen” who had his creation destroyed.

The laminated letter was posted to a tree and said the following: 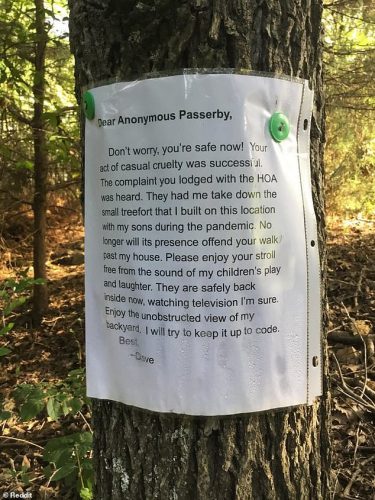 “Dear anonymous passerby, Don’t worry, you’re safe now! Your act of casual cruelty was successful. The complaint you lodged with the HOA was heard. They had me take down the small tree fort that I built on this location with my sons during the pandemic.

“No longer will its presence offend your walk past my house. Please enjoy your stroll free from the sound of my children’s play and laughter. They are safely back inside now, watching television, I’m sure. Enjoy the unobstructed view of my backyard. I will try to keep it up to code. Best, Dave.”

Americans know that their local HOA or homeowner’s associations can be very powerful. These organizations are in charge of specific neighborhoods and help keep things in order for all residents. However, sometimes power gets abused, as is the case for Dave, who simply wanted to build something with his sons while locked away with them during the pandemic.

On Reddit, hundreds of people came to Dave’s defense and urged him to keep on fighting the person branded a “Karen.”

“Dave, Fight back. Don’t let the Karen win,” wrote one commenter. “Take over the HOA and change the rules. Work from inside the system if you must. Don’t let the children down. I really really need to know you didn’t let this idiot have her way. Let me know if you need help. Dave’s of the world UNITE!”

“This is infuriating,” wrote another.

“Boomers: Why don’t the kids these days play outside like we used to instead of just sitting in front of the tv all day?” another person wrote, adding: “Also Boomers: Let’s destroy the outside and make so many rules that it’s no longer fun to play outside!”

“Some people need everyone to be as unhappy as they are. How dare you be happy?” commented another person.

HOA rules have been the bane of many Americans’ existence for some time. In Racine, Wisconsin, a gay couple was asked to remove their pride flag per the HOA rules. The story of Memo Fachino, 35, and Lance Mier, 36, went viral recently.

“Due to some neighbors flying BLM flags, Thin blue line flags, and other opinion flags, our HOA decided last month that we’re only allowed to fly the USA flag, and nothing else,” they wrote. “The day after the decision, we receive an email that someone reported our Pride flag (that we had in our house since 2016) and that we needed to take it down.”

Do you think this man should have fought to defend his treehouse from the neighborhood “Karen”?