Tony Bennett, 96, Says ‘Life Is a Gift’ as He Still Recognizes Wife & Kids despite Alzheimer’s Diagnosis

Guinness world record holder and America’s most gifted jazz singer, Tony Bennett, was diagnosed with Alzheimer’s disease a few years ago. Despite the diagnosis, he maintains an optimistic viewpoint on life—thankfully, the singer still recognizes his loved ones.

Tony Benett has lived a full and fulfilled life. He remains one unmatched and the country’s most skilled jazz singer with a knack for impressing through his performances of indigenous pop standards, show tunes, and big bands.

Last month, the living legend clocked 96! Interestingly, his social media page shared a charming photo of the ever-vivacious singer holding a mic in one hand as he stared brazenly into the air.

The accompanying caption read, “It’s Tony’s 96th Birthday today! Celebrate by listening to his birthday playlist and post your birthday wishes to Tony!”

Many fans, including high-class celebrities, honored the legendary superstar and poured out their love and appreciative words. Movie connoisseur Robert DeNiro shared a heart-melting message with his friend.

The actor wished the celebrant a happy birthday and added a little prayer. He confessed that there was a plan to take Tony on an outing, but it was canceled due to the pandemic. DeNiro explained that he is still hopeful to meet the celebrant. He said:

“I want to see you soon. So I’m hoping we can do that. Lots of love. Happy Birthday. Don’t go wild,” before blowing an adorable kiss to his friend.

Amazingly, Stevie Wonder also honored the outstanding jazz hero with a one-minute birthday song. The singer played a melodic tune with customized lyrics for the celebrant, whom he referred to as “my friend Tony Bennett.”

While many may think Tony’s list of friends includes aged male singers, that’s not the case. A few years ago, fans were introduced to an unlikely friendship between the music icon and a younger female singer, Lady Gaga.

As mentioned earlier, Tony is known for traditional pop standards and has released albums in the big band, jazz, and show tunes. In comparison, Lady Gaga is a skilled pianist, pop star, and classically-oriented singer.

The duo met in 2011 after Lady Gaga’s performance at the Robin Hood Foundation gala in New York City. The songstress has done a fine rendition of Nat King Cole’s “Orange Colored Sky”.

In 2012, the singers talked about working together, and the following year, they teamed up for a duet performance at President Obama’s second inauguration.

Soon, they worked on a jazz album, “Cheek to Cheek”. Then, last year, they both thrilled fans with a follow-up album titled “Love for Sale”. It was recorded in New York.

While working on this piece of music, Lady Gaga confessed that she was in awe of the aged singer. They documented his last stage performance with a tribute song delivered by Lady Gaga, who later escorted him off stage.

Even though it was challenging to witness his failing health, she revealed that sharing his final onstage presence was more than what she wanted. In an emotional tone, she said:

“Just simply being the woman that got to walk him off stage, that’s enough for me.”

The jazz legend reached out to his fans in appreciation after the announcement in a video that also featured his singing partner.

In the same video, Lady Gaga spoke highly of the icon. She praised his work ethic, adding that he inspired her. According to Guinness World Records, the singer holds other world titles.

Per NBC News, he is “the oldest person to reach No. 1 on the U.S. album chart and to enter the U.K. top 20 album chart, as well as the longest time between U.K. top 20 albums (39 years) and between the release of an original recording and a re-recording of the same single by the same artist.”

Tony Never Allowed His Disease to Define Him

Tony was diagnosed with Alzheimer’s disease in 2016. This illness is characterized by memory loss, affecting the victim’s cognitive state. The carrier slowly loses its ability to talk and comprehend and eventually fails to recognize loved ones.

Tony and Susan first crossed paths in 1966, before she was born. The singer was introduced to her dad and pregnant mom during a meet and greet.

Thankfully, the legendary singer does not exhibit all the features of the disease. Instead, he calmly observes his environment, and with the help of his much younger, loving wife, Susan, he is living a remarkable life.

According to Gayatri Devi, M.D., the neurologist who diagnosed the singer in 2016, Tony is an exceptional man who surpassed her expectations. She said:

“Multiple other areas of his brain are still resilient and functioning well. He is doing so many things, at 94, that many people without dementia cannot do.”

Devi described him as the “symbol of hope for someone with a cognitive disorder.” Truly, Tony is an inspiration to many people. Despite the diagnosis, he continued to perform music professionally and went on to produce an album.

Thankfully, Tony has a great team consisting of his wife, who cares for him, his eldest son, Danny, who manages his business, and many others.

Susan confessed that it is not always easy, but she is grateful to be surrounded by helpful hands and a husband who is often cheerful. She added:

“He recognizes me, thank goodness, his children, you know, we are blessed in lotta ways.”

The 96-year-old reminds his wife that he is fine whenever she explains his condition. But above everything else, he believes “life is a gift – even with Alzheimer’s”, and shows gratitude to his family for their support.

Tony and Susan crossed paths in 1966 before she was born. The singer was introduced to her dad and pregnant mom during a meet and greet. 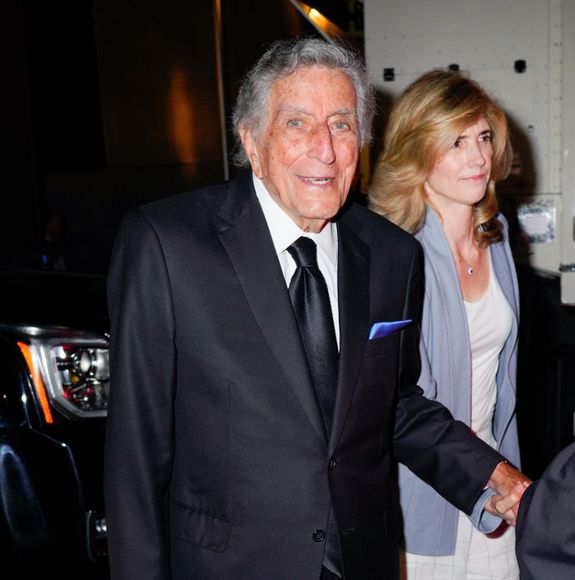 More than a decade later, they met again. This time, Susan, born and raised in San Francisco, had become an ardent fan of his music and was named the president of his fan club in the Bay Area.

Soon they went out on a date after meeting backstage. At the time, Susan was 19, and Tony was almost forty years her senior.

Still, it did not affect their romance—the couple dated for two decades before deciding to tie the knot in a private ceremony in 2007. 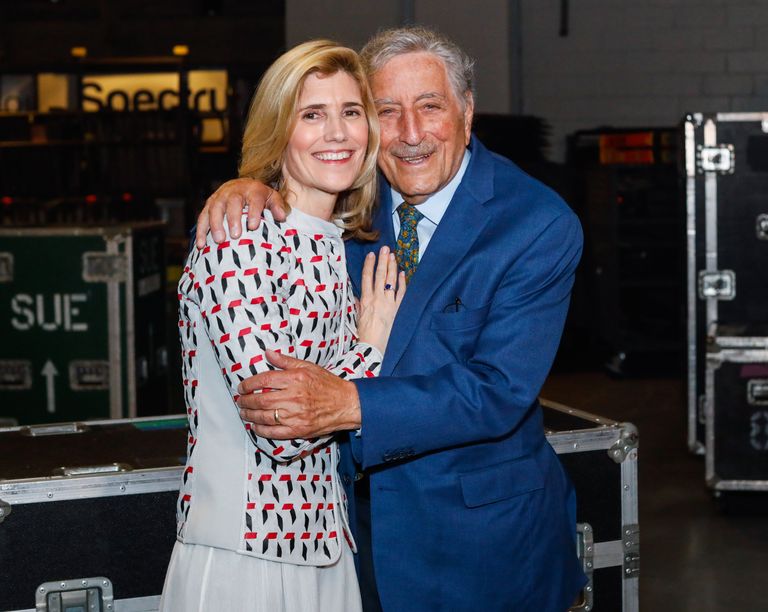 Even though this became Tony’s third marriage, he was certain she was his soulmate; after all, the third time’s a charm! However, while sharing his conviction, in a 2020 post, he quipped:

“She makes my life better in every way, and I owe so much to her. Susan inspired the lyrics I wrote for ‘All For You,’ and I once again dedicate this song to her today.”

Consequently, Susan is also as talented as her husband and wears many hats on her head. She worked as a teacher and later founded the Creative Artists Management company before settling for philanthropy.

But one of the titles that best describes her is being the devoted wife to the famous jazz singer. She inherited her love for him from her mother, who was also a fan.

Tony’s music has always affected her—it endeared him to her; Susan confessed that she loves every bit of it. In her words:

“There’s a lot about him that I miss. Because he’s not the old Tony anymore, but when he sings, he’s the old Tony.”

Tony has racked up many records, including world records, but what appeals to him the most is being a typical dad to his four kids, Danny, Dae, Joanna, and Antonia. 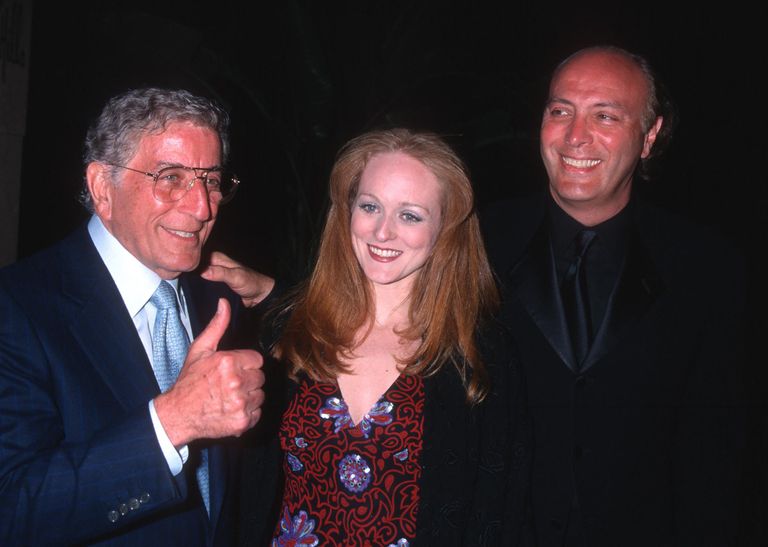 The first time the singer experienced fatherhood was during his marriage to Patricia Beech in 1952. The pair welcomed Danny after their wedding. A few years later, another son, Dae, joined the clan.

Following his divorce from Beech, he married Sandra Grant and welcomed daughters Joanna and Antonia.

Despite divorcing their moms, Tony remained a loving dad to his kids, who inherited his singing and performing talents. Danny is a skilled producer with a few Grammy nominations to his name. 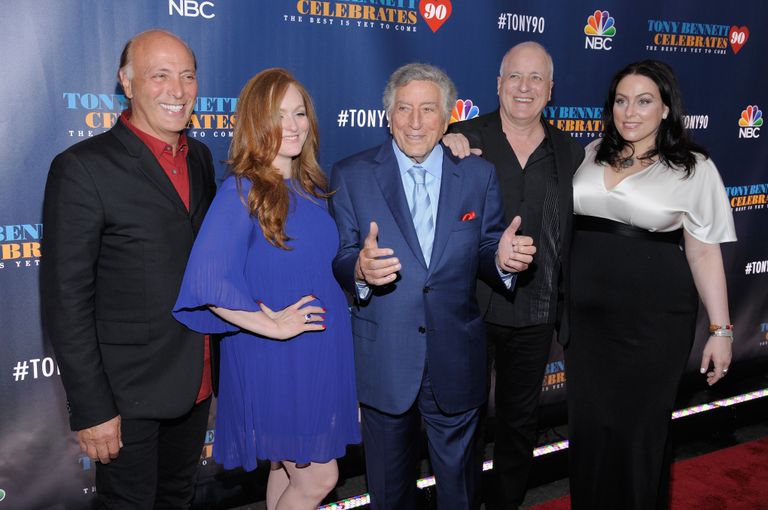 His brother Dae is a singer, drummer, audio editor, and producer. Joanna, Tony’s first daughter and his solid rock has been very supportive of her dad, appearing on red carpets with the legend.

The youngest is equally rooted in music. She is a singer and an actress. The Bennett clan has remained close to their dad following his Alzheimer’s disease diagnosis. Despite their careers and families, they still love their father.