One woman from Utah always dreamed about being the mom of seven babies. However, the odds didn’t count in her favor as she got older. The 46-year-old couldn’t believe it when she fell pregnant—which wasn’t even the most surprising part!

Many people trust in the power of prayer and rely on their faith when hoping for something impossible. They want to see their dreams become realities, but it isn’t always easy.

A woman desperately wanted to grow her family and even tried fertility treatment. When it didn’t work, she tried another approach—prayer. If you don’t believe in miracles, this mom’s story might convince you! 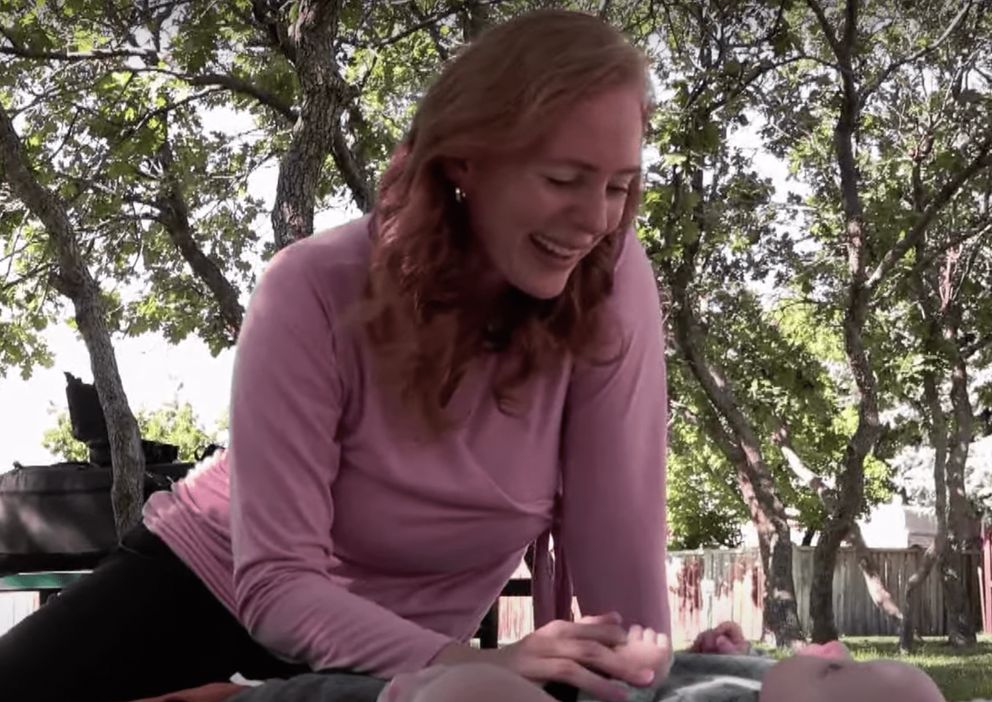 Her Chances of Conceiving Were Low

Everyone knows that having twins is a rare phenomenon. A handful of parents are blessed with the honor of simultaneously welcoming more than one child.

Giving birth to triplets naturally is even more uncommon and not always something moms and dads hope for. However, Audrey Tiberius was different. She longed to have more babies, but doctors didn’t think it was a realistic goal.

The mom’s doctors had more to say, and the update shocked everyone.

When she was 41, fertility specialists told her she only had a 10% chance of conceiving via In vitro fertilization (IVF). The mother added: “They said, ‘I’m sorry, your eggs are too old.’ We did three rounds of in vitro, and they all failed.”

Audrey and her husband, Tyler Tiberius, 41, were disappointed but grateful for the four sons they already had. Marcus, James, Christian, and Max meant the world and brought them endless joy.

The mother continued to carry the desire for a bigger family in her heart and held onto a seed of faith. She shared:

“I prayed and prayed for five years to have more children because I always wanted a really big family, and seven was kind of my number.”

At 45, Audrey received the news she had always dreamed about. It was years in the making and took lots of faith, and it had finally happened—she was pregnant. The family was over the moon and couldn’t wait to meet their next bundle of love.

The mom’s doctors had more to say, and the update shocked everyone. Audrey wasn’t carrying one baby. She was expecting three! “There’s no way to explain it other than a miracle. What a gift from God!” the mother exclaimed.

Having identical triplets at 46 is exceptionally uncommon, and after speaking to a statistician, Audrey said the odds of it happening are one in 20 billion. She wasn’t far off when she said it was like something supernatural had occurred.

Audrey was aware of the high risk of a miscarriage at her age and prayed for the safety of her unborn babies. She trusted her body and believed everything would work out as intended. Thankfully, it did.

Sky, River, and Bay joined the Tiberius family in March 2022 and gave their mom one of her heart’s biggest desires—having seven children. Audrey is a committed mom and is proud of what her body can do.

She pumps breastmilk, burps, feeds, and changes the babies all day. The doting mom does it all with a smile. However, it is challenging, and Audrey shared:

“It’s a little crazy sometimes when we can’t tell who’s who because they’re across the room. They just look so much alike.”

Open to Having More Kids

Audrey felt as if her life was now complete thanks to her sweet babies, and despite the initial shock, she knew it was meant to be. While she is over the moon and content with her big family, the mother hasn’t ruled out having more kids.

She always wanted a daughter, and her husband supported the desire. Audrey and Tyler said the sky was the limit, adding: “So, maybe we’re not done. Who knows?”

The mother of seven shared her story to increase awareness surrounding fertility issues. She stated:

“Doctors need to talk to women about fertility and what their options are to save them heartache.”

The mother was in “baby heaven” and became emotional when speaking about her three extraordinary miracles. She wished everyone could have all the children their hearts desired and understood that she was immensely blessed.

Click here for a story about a mom who gave birth to a breathless infant. Discover what happened when her husband began to pray for the child.