If you have ever posted anything online through social media, then you know how much of a chance you are taking. No matter what you post, there will always be trolls ready to call you out. It’s even worse if you differ from what is considered “normal” in any considerable way, be it by choice or because you lucked out in the game of genetics. Social media can be very cruel and unforgiving for the disabled and outcasts.

This also happened to a disabled freelance writer named Melissa Blake. She is a blogger and creative writer from Illinois who has already faced a major backlash after she posted a political tweet expressing her opinions back in 2019. Of course, anything that people can disagree on will have a discussion soon follow. However, as trolls are known to do, the insults soon became based on her appearance instead of her personal thoughts or opinions, and civilized discussion was far from their minds.

According to the BBC, Blake was criticized for her appearance in many alarming ways. Some Twitter users called her “ugly,” “fat,” and even a “Blobfish,” comments which she re-posted on social media. While many people would turn off their social media accounts after dealing with such hurtful insults, Blake decided to fight back in an unusual way. She posted a few selfies while calling out her trolls. And when they wouldn’t back down, Blake doubled down and announced that she would post one selfie a day for a whole year – just to show those trolls and cruel commentators that she wouldn’t be discouraged or hurt from their comments.

Be sure to reach the end of this article to see the full video.

I haven’t had my stylist (my sister) cut my hair since the end of May.

Blake stated that many commentators even said that she should stop posting just because, according to them, she is “too ugly.” So to get back at them, Blake posted a couple of wonderful selfies. We applaud her courage! Her tweet about the whole thing went viral, having been liked over 326,000 times.

Blake said that she would not let the trolls get to her no matter what they said. She also stated that if they tell her that she shouldn’t do something, then she would turn around and do exactly that.

Blake was soon flooded with hundreds of positive messages of support in response to the whole incident. She was quite overwhelmed by the overwhelmingly positive response to her tweet and posted a thank you to her amazing followers.

In another tweet, Blake wrote that she woke up to an interview request from none other than BBC, an email from a well-known book publisher, and an amazing 26,000 followers. And it didn’t stop there.

According to Reader’s Digest, one of the people who took notice of Blake’s daily selfie posting during 2020 was Mindy Scheier, founder and CEO of Runway of Dreams, which showcases fashion for people with disabilities. The fashion label was part of the New York Fashion Week in early 2021, and Scheier reached out to ask Blake to take part as a model.

“Being able to put Melissa in arguably the biggest fashion event of the year just hit home how important it is to expand who consumers are in the fashion industry, or who should be on runways, or what we’re really representing in the word model”, Scheier stated. 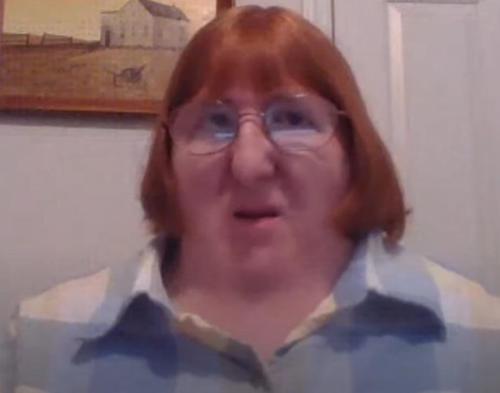 Scheier also went on to add: “Melissa is a force to be reckoned with and unapologetic about what the world should look like.”

Since the runway show was conducted digitally and socially distanced due to the ongoing pandemic, Blake’s actual appearance was filmed beforehand. Her sister took over the camera and took footage of Blake riding down a quiet street in her scooter. Blake was wearing a graphic print T-shirt, capris and a maroon vest with an especially eye-catching and large fluffy collar.

“It was a little scary,” Blake admitted to Reader’s Digest later on. She went on to say that often, accessibility for handicapped people is only thought of in terms of access to buildings or public transportation. However, it is also important that people with disabilities have access to fun and enjoyable things, as these make life worthwhile.

“Fashion isn’t going to solve all the world’s problems,” Blake explained. “When disabled people are included, it sends a message that we deserve a seat at the table in all aspects of life, frivolous or not.”

Blake also said that, if she had seen someone like herself or any person with a disability in fashion shows and magazines when she was younger, she would have felt much more settled and at home in the world.

“That would have been a game changer for me. When you’re a teenager—disabled or not—you deal with issues of self-esteem. If I had seen someone who looked like me, I would have felt really seen.”

It’s good to know that things are changing now.

What did you think about Melissa? Have you ever been the target of internet trolls? Leave us a message before passing this on to others.

Please scroll below for more stories.