Woman Tries To Stop Arr*st Of Su*pe*t, Cop Knocks Her Out

Video footage captured a woman hitting and shoving a police officer as they arr*sted an attempted mu*der su8pe*t. However, things took a sudden turn when the officer deci*ed to give her a taste of her own medicine.

A video showing a police officer responding to a belligerent woman went viral. The confrontation occurred while New York City Police Department officers were in the process of arresting 22-year-old Elvin James, who has been charged in connection with an attempted mur*er during a fight.

James was reportedly carrying an illegal ghost gun and had illegal drugs on his person at the time of his ar*st. The situation was a high-ri*k scenario that required intense focus by the arre*ing officers. So, when a woman intervened in their duties, she had to be dealt with quickly and efficiently. 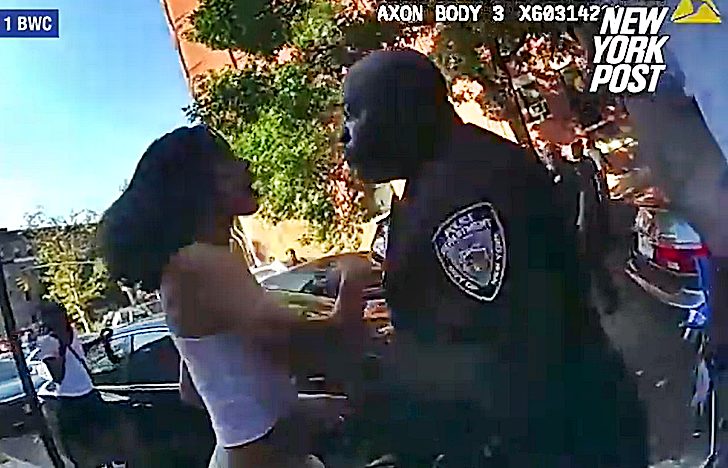 Cell phone footage shows 19-year-old Tamani Crum getting in the face of NYPD Detective Kendo Kinsey as he and several other officers were ar*ting James, who is reported to be her boyfriend. The young woman can be seen shoving Officer Kinsey, prompting him to shove her back. She immediately returns, striking the officer’s chest. At this point, the officer delivers one solid punch to her face, sending her falling to the sidewalk.

The blow caused Crum to hit the back of her head on the concrete. As she lies on the ground holding her head, additional officers help her up and place her under arrest. She was subsequently charged with a single count of second-degree obstructing c*min*l administration. Crum pleaded not guilty and was released without bail, according to the New York Post.

Tamani Crum’s family insists that she did nothing wrong and that Officer Kinsey “should never, never, never put his hands on her, or any female.”

“I get blown away to see this happen to my daughter; it’s so painful for a mother to see that,” the mother of 19-year-old Tamani Crum told WNBC-TV. “They are just violating these kids’ rights; it’s not right.”

Crum’s mother said that she hired an attorney for her daughter and that they want to see Officer Kinsey punished.

“This has to stop, and we are seeking full accountability in this action,” attorney Jamie Santana Jr. said. “You mean to tell me a grown man more than twice her size in weight could not handle a 19-year-old female in a different manner?” 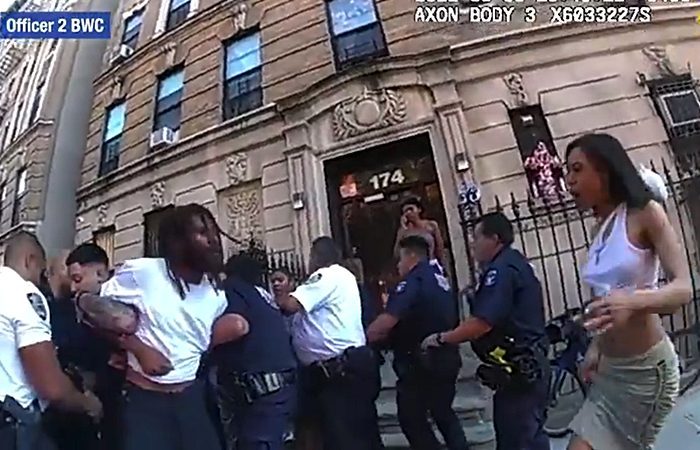 Tamani Crum was intervening in the ar*st of Elvin James, 22, who has been charged with attempted murder as a hate c*me. (Photo Credit: Screenshot)
The Detectives Endowment Association defended Officer Kinsey and announced that they are considering filing a lawsuit on his behalf.

“Criminals in NY have grown accustomed to there being no consequences for their dan*ous, il*gal actions – but when you assault a New York City Detective in order to interfere with an ar*st of a man armed with a gun there are repercussions,” the union said in a statement. “As the [Detectives Endowment Association] explores a possible civil suit on behalf of our dedicated member against the woman who at*ked him, we urge politicians to open their eyes and see the public safety disaster they’ve created.”

Elvin James was charged with two counts of criminal possession of a we*on, reckless endangerment, and attempted mu*er as a hate cr*e. 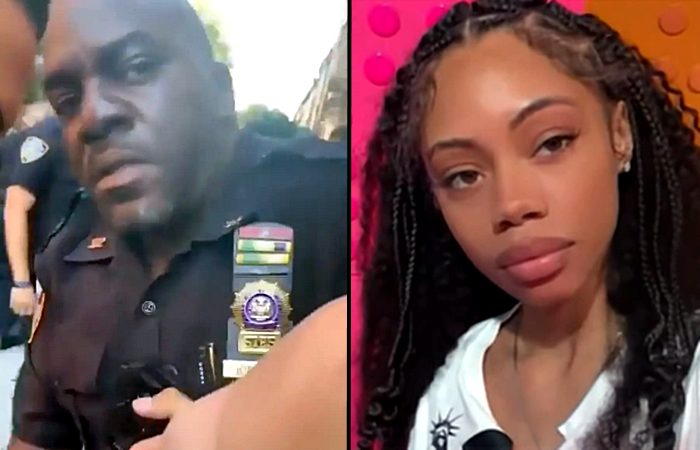 While Tamani Crum’s family hopes to sue Officer Kendo Kinsey, the Detectives Endowment Association plans to bring a counter lawsuit against her on the officer’s behalf. (Photo Credit: Screenshot, Provided)
Officer Kendo Kinsey was placed under investigation for his res*se to Tamani Crum’s interference. Even if he is found to be justified in his handling of the situation, he faces lengthy and costly legal ramifications.

Crum intervened in a situation in which officers were trying to ar*st an allegedly armed and dan*s individual. Her interference put officers and civilians at ri* and had to be stopped quickly. Disturbingly, many are outraged over the officer’s reaction while giving a pass to someone who could have gotten innocent people in*ured or ki**ed.